Slowdown in the economic assimilation of immigrants

The aggregate number of foreign-born persons in the United States has never been higher than it is in 2013, but as a percentage of the population, the current number is still not quite as high as it was in the late 19th and early 20th century. “About 40 million foreign-born people now live in the United States,” the Congressional Budget Office (CBO) notes. “Of that group, not quite half have fulfilled the requirements of U.S. citizenship. Of the remaining people, about half are authorized to live and work in the United States, and about half are not authorized to live or work in the country.”

As the United States contemplates further policy reforms, the economics of immigration have become a chief topic of debate. The CBO has estimated that allowing more noncitizens to enter the United States lawfully could significantly bolster economic growth — for example, boosting GDP by 3.3% by 2023 — and help lower the budget deficit by nearly $200 billion over the next decade. 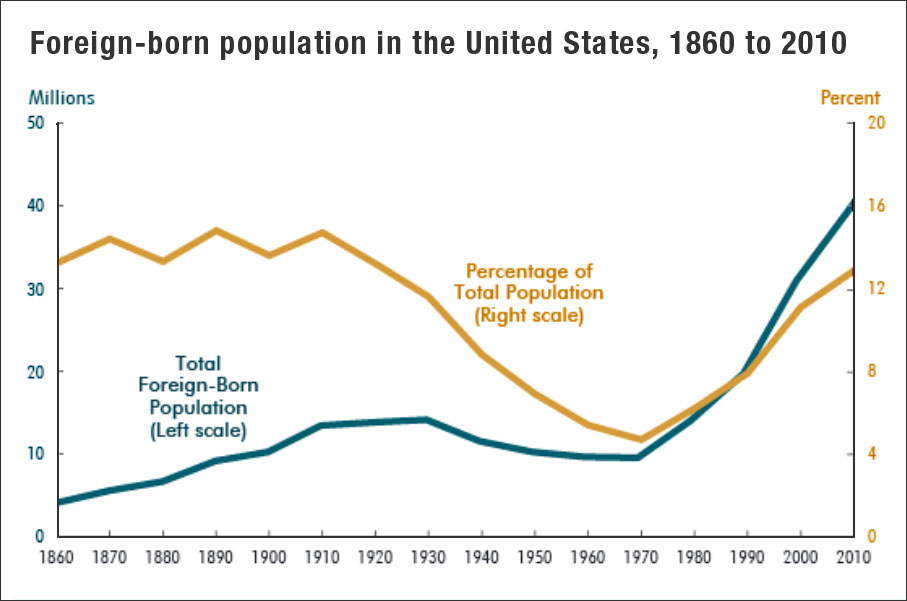 It is almost proverbial that new immigrants frequently begin to “catch up” with U.S.-born residents’ socioeconomic mobility — hence, the idea of the American Dream. David Leonhardt of the New York Times suggests the cyclical nature of immigration patterns in his 2013 article “Hispanics, the New Italians.” Still, there is significant diversity even among broad immigrant cohorts. According to the Pew Research Hispanic Center, Latinos as a whole now have a higher rate of college enrollment than whites; but a variety of outcomes for Hispanic subgroups vary depending on the country of origin.

Yet some argue that aspects of assimilation may be changing in America. What is the evidence? A 2013 working paper for the National Bureau of Economic Research by George J. Borjas of the Harvard Kennedy School, “The Slowdown in the Economic Assimilation of Immigrants: Aging and Cohort Effects Revisited Again,” examines Census data to assess the gap in earnings between immigrants in the U.S. labor market and U.S. nationals. By examining earnings levels and growth rates, the author focuses on how recent immigrant groups have achieved relative “economic assimilation” (also called “wage convergence,” i.e., “the rate at which the wage gap between immigrants and natives narrows over time”).

The author states that these wage gaps were likely not caused by period-specific economic trends or changes in composition of immigrant groups, nor by changes in geographic settlement areas for immigrants. The data “consistently identify one factor — namely, national-origin group size — that is partly driving the observed decline in the rate of economic assimilation. As a result, the evidence suggests a potentially important hypothesis that is certain to become the focus of much research: the more recent immigrant cohorts have fewer incentives to invest in U.S.-specific human capital because the growth of the immigrant population makes those investments less profitable than they once were, and those reduced incentives have slowed the rate of economic assimilation.”

However, the paper also concludes that further research is merited to confirm this finding more definitively: “Because of the potential significance of the evidence, it is prudent to conclude by stressing the need for caution in the interpretation of the findings and the need for replication of the results before we can unequivocally assert that the trends revealed by the Census data describe an important part of the immigrant experience in the U.S. labor market.”

Related research: More limited language or educational attainment does not necessarily indicate a lack of motivation by immigrants. In a 2012 study published in Social Science Quarterly, “Who Doesn’t Value English? Debunking Myths About Mexican Immigrants’ Attitudes Toward the English Language,” researchers find a complicated picture in which new immigrants frequently place high levels of importance on language learning. “Our findings raise serious questions about the accuracy of widespread claims by commentators, politicians and the general public alike that Mexican immigrants simply do not desire to learn English,” the researchers conclude.