Facing what it perceived as a growing threat from the Islamic State (ISIS), a large insurgent group that has taken over parts of Syria and Iraq, the Obama administration has begun air strikes targeting its forces, including, for the first time, on Syrian soil. Recent polls — for example, by Washington Post-ABC News and Wall Street Journal/NBC News — have suggested significant public support for this effort.

This support stands in apparent contrast to the results of some polling in summer 2014, which suggested continuing opposition to any military operations abroad. Such data had prompted observers to characterize Americans as increasingly war-weary and more isolationist, following more than a decade of conflict in Iraq and Afghanistan.

Any swing toward supporting military action could represent an important shift in public opinion. But this apparent shift also comes despite the fact that, according to Gallup, Americans have increasingly seen terrorism as less of a pressing priority over the past decade; and a majority continue to say that the country should not have invaded Iraq in 2003 and should not conduct direct military action again to support the Iraqi government in its fight against the Islamic State. Past opinion polls have also shown that the U.S. public has been consistently wary about military intervention in the Syrian civil war, even as chemical weapons were used by the regime in 2013 and as the country’s refugee crisis has grown to historic proportions.

At this point it remains unclear if American public opinion is changing more generally on military and foreign policy issues, or if recent shifts are unique to the challenge posed by the Islamic State. After all, public sentiment is often unpredictable on matters of war and peace, as history shows. How does the current sentiment of Americans compare with public sentiment on the eve of — or at key turning points during — prior conflicts?

The following are snapshots of U.S. public opinion about the country’s participation in conflicts across the past 60 years — from the Korean War to the air campaign in Libya — through the lens of Gallup polls. The questions asked by Gallup are not always parallel between separate polls, but the patterns and responses nevertheless furnish interesting and useful historical perspective. (Note: Access to some of the underlying historical data requires a subscription, which is provided by many institutions and libraries.)

March 2011: Enforcing the U.N. “no fly” zone in Libya
In a March 21 poll conducted after the United States joined other countries in conducting air strikes against Muammar Qaddafi’s forces to enforce the United Nations’ no-fly zone, 47% of respondents approved U.S. actions, while 37% did not. While more respondents agreed than disagreed, the levels of support were lower than those for earlier U.S. military campaigns, including Iraq in 2003 (76% for, 20% against), Afghanistan in 2001 after the World Trade Center attacks (90% for, 5% against), and Afghanistan and the Sudan in 1998 (66% versus 19%). Prior to Libya, the U.S. military interventions that received the lowest public approvals were Kosovo and the Balkans in 1999 (51% for, 45% against), Haiti in 1994 (54% for, 45% against) and Grenada in 1983 (53% versus 35%). The chart below includes other conflicts as well. 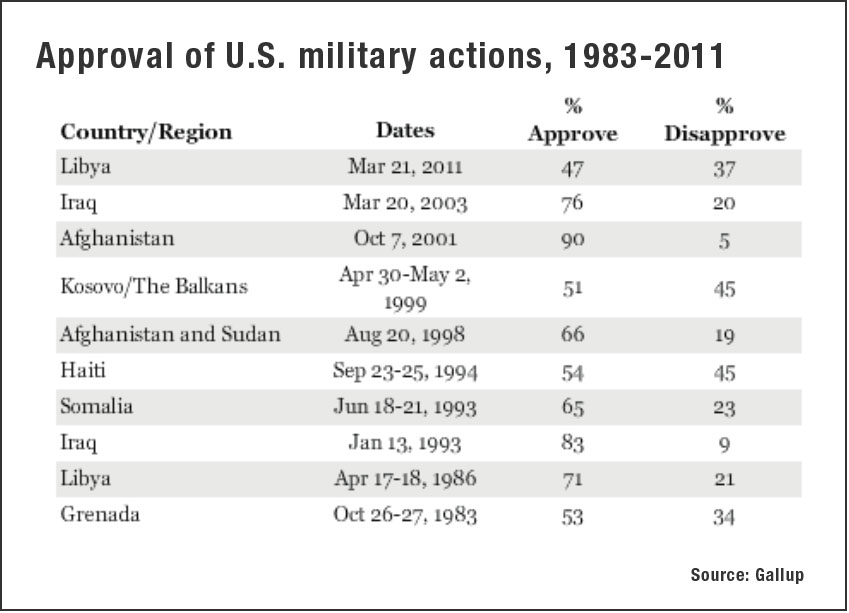 November 2009: The Afghanistan troop “surge”
From November 20 to 22, 2009, Gallup conducted a poll on public support for four options in the ongoing Afghanistan conflict: The first was to increase the number of U.S. troops by the approximately 40,000 — commonly referred to as the “surge” — the option recommended by the U.S. commanding general at the time. The other options were to increase troop levels but by a smaller amount; keep the number of troops the same; or begin to reduce the number of soldiers. A plurality of the respondents, 39%, wanted to reduce troop levels, while 37% supported a “surge.” Only 10% supported a smaller increase in troop levels, and 9% wanted to keep them the same. On November 30, President Obama ordered 30,000 additional troops to Afghanistan.

March 2003: 48 hours for Saddam Hussein to leave Iraq
On November 8, 2002, the United Nations passed a resolution stating that Iraq was in “material breach” of the ceasefire terms agreed to after the Persian Gulf war in 1991. After the 2002 vote, three months of warnings by the United States, debate by the U.N. and rhetoric from Iraqi officials followed, until U.S. President George W. Bush announced that the U.S. would attack unless Hussein left the country within 48 hours. For Iraqis, the possibility of war was suddenly very real. Gallup asked 783 U.S. residents their opinions on Bush’s decision: 66% approved, while 30% disapproved.

October 2001: Military intervention in Afghanistan after 9/11
Precisely one month after the attacks on the World Trade Center and Pentagon, nearly 500 U.S. residents were asked if they favored or opposed “direct military action” by the United States in Afghanistan. Just over 88% approved the United States taking such action, while 10% opposed, and the remainder either didn’t know or declined to answer. In the same poll, a plurality of the respondents, 47%, said that the most important problem facing the country was terrorism; the economy in general was the second-most important problem (13%).

October 1998: Air strikes against Serbian forces in Kosovo
After a massacre of ethnic Albanians in Kosovo was attributed to Serbian forces, a divided U.N. Security Council held an emergency meeting after passing an earlier measure authorizing the use of military force. In the United States, more than a thousand respondents were asked whether the U.S. and its European allies should conduct air strikes against the Serbian forces in Kosovo. The response was closely divided: Just under 42% said that they approved military action, while 41% did not. The remainder, 17.25%, didn’t know or declined to answer.

February 1994: Ethnic and religious conflict in Bosnia
On February 5, 1994, a crowded marketplace in Sarajevo was targeted by mortar-fire during the four-year-old siege of the city. Nearly 70 people died and hundreds more were injured. A poll conducted on the following Monday, a subset of U.S. residents were asked “Would you rather see the Muslims win or the Serbians win, or are you not sure?” Of those who responded, just 10% favored either one, while the vast majority of respondents either didn’t know (81%) or didn’t answer (9%). Opinions were almost precisely split on President Clinton’s handling of the crisis — 37% approved and 37% disapproved — while the balance weren’t sure.

May 1993: U.S. troops to Bosnia?
As the ethic and religious conflicts in Bosnia steadily worsened after the 1992 breakup of the former Yugoslavia, there were calls for the United States to send troops to the country. Just three years earlier the United States had rapidly bested Saddam Hussein’s troops after the invasion of Kuwait, yet the ghosts of earlier, far bloodier conflicts of U.S. troops remained. The question asked was: “If the United States were to send troops to Bosnia, do you think that situation would end up being more like the Vietnam War or more like the Persian Gulf War?” Just under half of respondents (49%) felt it would be relatively rapid, while 43% thought it had the potential of turning into a military quagmire.

December 1990: The Iraqi invasion and occupation of Kuwait
After months of rhetoric, accusations and troop movements by Saddam Hussein, Iraq invaded Kuwait in August 1990 and proclaimed the country to be its 19th province. There were fears over the potential for the conflict widening to neighboring Saudi Arabia, a strong ally of the United States and the country’s largest supplier of petroleum. Nearly 1,700 respondents were asked how closely they followed news about the situation and whether the Mideast situation was worth going to war over. Nearly half (49%) said it was worth fighting a war, while 44% said it wasn’t. In the same poll, the performance of president George H.W. Bush was favored by respondents at a two-to-one ratio, with 63% expressing approval and 30% disapproval.

March 1986: Libya fires missiles at U.S. planes and the Air Force responds
In 1973 Libyan leader Muammar Qaddafi stated that Libya had exclusive rights to the entire Gulf of Sidra, in the center of the country’s coastline; the U.S. asserted that international law applied, and in early 1986 held maneuvers in the gulf. On March 23 conflict broke out: Libya fired several missiles and the U.S. replied in force, taking out ground radar installations as well as a Libyan boat. A U.S. poll held afterward asked: “Do you feel U.S. attacks against Libyan ships and military sites were justified or not?” Nearly three-quarters of the respondents said the attacks were justified, while 15% said they weren’t.

February 1965: The U.S. conflict begins to escalate in Vietnam
In August 1964 the U.S. Congress passed the Gulf of Tonkin Resolution, which gave President Lyndon B. Johnson the power to conduct military operations in Southeast Asia without a declaration of war. In February 1965, six months later, Gallup asked more than 3,500 poll participants if the United States should continue its efforts in Vietnam, even at the risk of nuclear war. More than 40% approved, saying the U.S. should continue, while 34% disapproved. Nearly 70% of respondents approved of President Johnson’s handling of his job as president, while 18% disapproved. Vietnam was seen as the country’s biggest problem by 29% of those polled, while 25% saw civil rights as the most important issue.

July 1950: North Korea invades South Korea
Just five years after the end of World War II, North Korea invaded its southern neighbor in June 1950. A month after, Gallup asked 1,236 U.S. residents the following questions: “Do you think the Communists in China will send soldiers to help the North Koreans fight against U.S. and allied troops, or not? If they do, do you think the United States should go to war against Communist China, or not?” More than half (54%) said the U.S. should go to war with China if the country sent troops to help the North Koreans; 27% said it shouldn’t, while 19% had no opinion.

For those interested in historical public opinion research, the Gallup Brain website is a rich resource. It contains the results of a wide range of polls conducted since the Gallup organization’s founding in 1935.