One issue that inevitably emerges within the immigration debate in the United States is the degree to which new arrivals, particularly Hispanics, are integrating into American society in terms of residential patterns, language-learning and general cultural norms. As national debate over immigration laws and unauthorized immigrants continues, it is essential to acknowledge the changing and nuanced dynamics of the populations in question. Moreover, a better understanding of the U.S. Hispanic population — some 52 million people, as of 2011 — can help inform the debate and upend stereotypes about Latinos being some sort of cultural “monolith.”

A March 2013 report from scholars John R. Logan and Richard N. Turner of Brown University, “Hispanics in the United States: Not Only Mexicans,” provides a detailed statistical look at subpopulations within the general Latino community, as well as various socioeconomic measures of particular groups and their relative levels of integration and isolation within American society. The research, sponsored by the Russell Sage Foundation and Brown’s American Communities Project (see their US2010 project for more data and studies), analyzes Census data and reveals significant differences among communities of different national origin.

There is significant variation in education levels and socioeconomic status among these communities. The following chart, excerpted from the Brown report, illustrates key data along these measures: 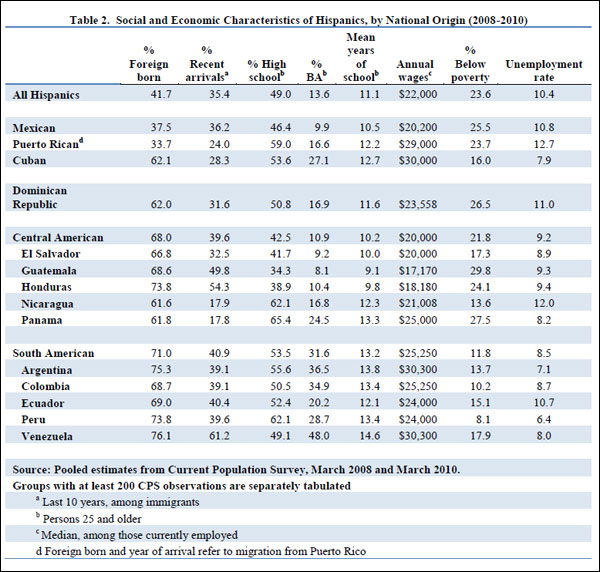 Hispanics in the United States: Not only Mexicans