The March 2014 report from the U.N.’s Intergovernmental Panel on Climate Change (IPCC), “Climate Change 2014: Impacts, Adaptation, and Vulnerability,” was unequivocal: Human-induced climate change is happening and the effects are already evident — shrinking ice caps, droughts and flooding, storms and extinctions. If greenhouse-gas emission levels continue to rise, the IPCC stated, future changes are likely to be even more extreme, with millions of people displaced by rising sea levels and global food supplies under threat.

Around the world, progress and inaction are present in what seems like equal measure. In 2013, renewables contributed 44% of the new electrical-generation capacity that year, with wind power providing the lion’s share. Yet the fastest-growing fuel is the dirtiest, coal. As the International Energy Agency states, “Coal use has never stopped increasing and the forecasts indicate that, unless a dramatic policy action occurs, this trend will continue in the future.” Natural gas is often thought of as a “bridge fuel” to a low-carbon future, but compared to solar and wind it’s still high carbon, and its extraction can lead to significant releases of methane, a potent greenhouse gas. A nuclear power plant produces fewer emissions over its lifetime than one powered by coal or natural gas, but the Fukushima disaster once again highlighted the substantial risks inherent to the technology.

To point the way forward, in April 2014 the IPCC released “Climate Change 2014: Mitigation of Climate Change,” which lays out ways to limit or reverse harmful trends in greenhouse-gas emissions. The need for international cooperation and especially a price on carbon are central to the report, but it also highlights the importance of direct actions at every level. Many of the suggestions are “actionable” by state and local authorities, businesses and individuals.

The graph below shows the proportion of greenhouse gases emitted by the various sectors of the global economy. Indirect emissions, shown on the right, are those that result from the generation of electricity and heat; direct emissions by sector are shown on the left. 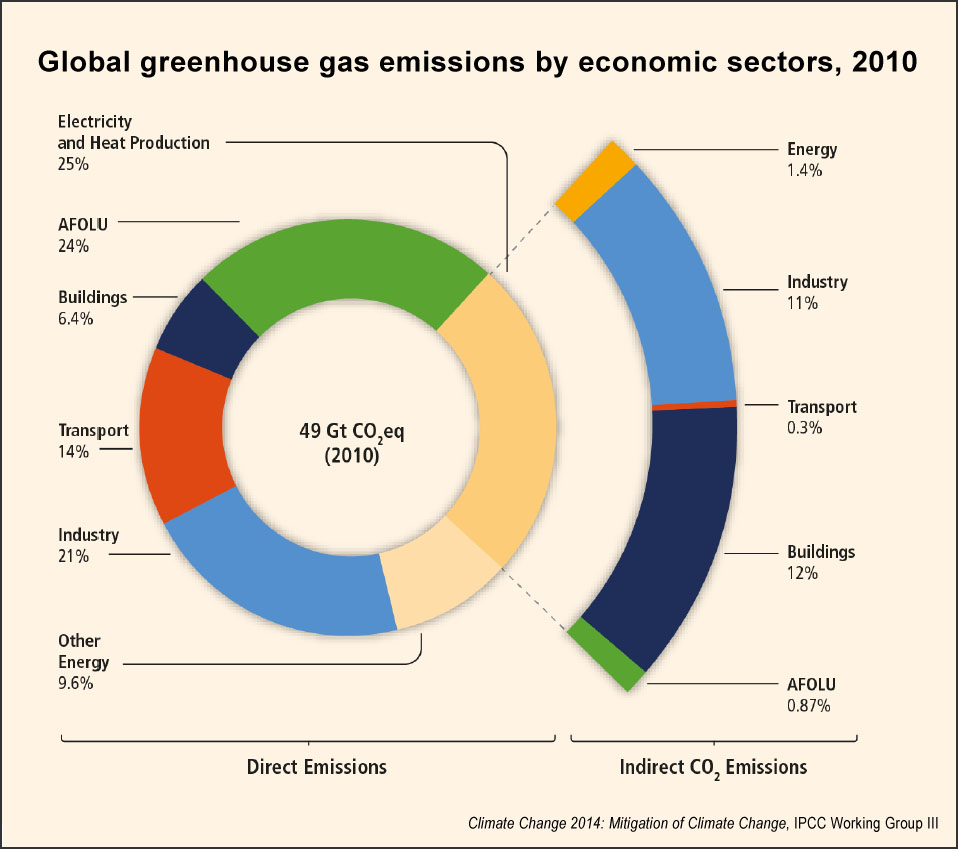 The report looks at each sector, outlining the potential for reducing greenhouse-gas emissions through greater efficiency, reduced use or other means.

Agriculture, forestry and other land uses

Many of the above approaches also have “co-benefits,” as the IPCC report calls them: “These mitigation scenarios show improvements in terms of the sufficiency of resources to meet national energy demand as well as the resilience of energy supply, resulting in energy systems that are less vulnerable to price volatility and supply disruptions.” Other advantages include reduced ecosystem impacts and pollution, improved human health through the increase in cycling and walking, and even increased worker productivity and employment gains that result from building-related mitigation options. When monetized, these and other co-benefits can exceed energy cost savings and potentially even climate benefits.

Related: In the United States, because many of the suggested actions take place at the regional and municipal levels, coordination is essential, particularly when working with state authorities. Urban-rural tensions have a long history, but recently larger cities have had significant trouble moving their agenda forward — for example, New York Mayor Bloomberg’s attempt to get congestion pricing “died in a closed conference room” at the New York State Legislature. A 2013 study published in the American Political Science Review, “No Strength in Numbers: The Failure of Big-City Bills in American State Legislatures, 1880–2000,” looked at 120 years’ worth of “district bills” in 13 state assemblies to see why many big cities had so little clout. Overall, the study found that cities with the largest delegations had the highest failure rates for district bills. “The larger the delegations are, the more likely they are to be internally divided, and the less likely their bills are to pass.”

How to mitigate climate change: Key facts from the U.N.’s 2014 report