Survey data continue to indicate that Americans have grown markedly pessimistic about the prospects of future generations, even as the most comprehensive research to date suggests a nuanced reality.

A 2014 paper based on massive data analysis — authored by Harvard’s Raj Chetty and Nathaniel Hendren; Patrick Kline and Emmanuel Saez of U.C. Berkeley; and Nicholas Turner of the U.S. Treasury — finds that “children entering the labor market today have the same chances of moving up in the income distribution relative to their parents as children born in the 1970s.” However, in the scholars’ “Equality of Opportunity” research project, they find that certain U.S. regions, particularly the Rust Belt and Southeast, have relatively low rates of mobility.

The Pew Charitable Trusts, meanwhile, identifies the key factors that consistently predict whether Americans will move up or down the economic ladder.

The general pessimism registered by the American public also corresponds with a marked rise in income inequality in the United States over recent decades, evidenced across a wide range of measures. As noted by Thomas Piketty and Gabriel Zucman of the Paris School of Economics, historic shifts in the wealth-income ratio have taken place over the same period. 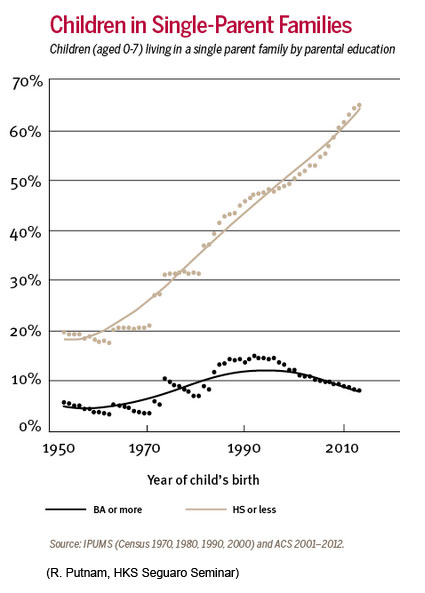 In his 2015 book Our Kids: The American Dream in Crisis, Harvard’s Robert Putnam points to a growing youth “class gap,” whereby the life chances and outcomes for children seem to be increasingly correlated with their parents’ education levels. Over the past 30 years, the advantages of upper middle-class children have increased significantly, as their degree of access to resources and enriching experiences has increased. At the same time, lower-income children’s corresponding access has plateaued or been reduced, as their family units and surrounding communities provide less support.

Underlying these economic trends and realities is a fundamental contradiction in what average U.S. citizens would prefer their society to look like, given the choice, and their stated policy preferences; and people “vastly” underestimate the degree of wealth inequality, as Michael I. Norton of Harvard Business School and Dan Ariely of Duke University have found.

Research on cognitive bias and skewed perceptions of economic realities among the American public can help shed light on larger issues of political dysfunction and polarization. In a 2015 study, “Perceptions of U.S. Social Mobility Are Divided (and Distorted) Along Ideological Lines,” researchers John Chambers of St. Louis University and Lawton K. Swan and Martin Heesacker of University of Florida examine associations between people’s political ideology or acceptance of social inequality and their perception of current and past social mobility. As part of the study, published in Psychological Science, Chambers and Swan recruited 410 American adults through Amazon.com’s Mechanical Turk. (While imperfect, sample populations from Mechanical Turk can be relatively diverse and more representative of the population than, for example, convenient samples such as college undergraduates.)

The survey contained three sections: First, “each participant was told to imagine a group of American children born in the early 1980s to parents from one of three social classes (the bottom, middle or top thirds of the income distribution). He or she was then asked to estimate the percentage of children in that group who ended up in the bottom, middle and top third of the income distribution by the time they reached their mid-20s, with the three category estimates constrained to total 100%.” Participants made judgments on all three income categories, in randomized order. Second, participants were asked whether, and in which direction, they think social mobility has changed in the U.S. over the last 40 years and assessed participants’ “satisfaction with the current social system,” as well as their acceptance of current social hierarchies and inequality. The final section assessed demographic characteristics including political ideology, political party, age, gender, race/ethnicity, household income and education level.

The authors conclude that “participants did not accurately predict the rate of social mobility in America, which — despite growing fears in the American public about limited opportunities for economic advancement and widening class divisions — remains greater both now and over the recent past than many people seem to realize.”

Further: The “Equality of Opportunity” project provides very specific detail on how a child’s life chances vary substantially by region within the United States: