Online harassment and threats are not a new phenomenon, but the degree to which these are directed at women and girls has begun to receive increased attention from news media, academia and law enforcement.

Forms of harassment can vary widely, from name-calling and trolling to persistent stalking and shaming to outright sexual and death threats. To some degree, the problem is structural and dates back to the Internet’s early days: The Telecommunications Act of 1996 allowed operators of websites to avoid liability for what users post, although the limits of this continue to be tested in the courts and many aspects of the Communications Decency Act provision are not entirely settled. But it remains the case that the wide-open environment that enables creativity, innovation and vigorous debate online paradoxically also enables derogatory, anonymous speech for which there is often little legal recourse.

Because of the volume of data and information they deal with, many Internet and social media companies struggle to articulate and enforce standards, even on more obvious issues such as the online messaging of violent extremists. Most warn that death threats, for example, are not protected by free speech, but banning users in an environment with anonymity is a challenge. In particular, the problems inherent on the microblogging platform Twitter, which, unlike Facebook, allows for anonymity, have been playing out publicly. Meanwhile, the controversy at Reddit that resulted in the resignation of CEO Ellen Pao in July 2015 again raises, among other things, issues over online harassment and the complex dynamics of addressing it.

As the totality and intensity of the harassment is being better understood, scholars have even begun to see this phenomenon as a profound civil rights issue for women and other groups such as racial minorities. Persistent threats can not only diminish well-being and cause psychological trauma but can undercut career prospects and the ability to function effectively in the marketplace and participate in democracy.

A 2014 Pew Research Center survey found that about 40% of Internet users say they have experienced harassment, and that females in particular age cohorts endure higher rates of threats:

Further, according to the Pew survey, women were much more likely than men to say that their recent experience with harassment online was “extremely” or “very” upsetting. 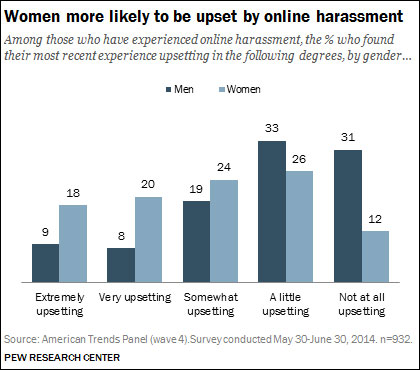 There have been a number of attempts at remedying the problem of cyber sexual harassment, from for-profit business models to new algorithmic software applications to detect and monitor threatening language.

The following studies and papers provide further perspective on these and related issues of online threats and harassment:

Abstract: “This interdisciplinary project focused on online speech directed at women and seeks to provide a primer on (i) what legal remedies, if any, are available for victims of sexist, misogynist, or harassing online speech, and (ii) if such legal remedies and procedures exist, whether practical hurdles stand in the way of victims’ abilities to stop harassing or defamatory behavior and to obtain legal relief. The study concluded that while online harassment and hateful speech is a significant problem, there are few legal remedies for victims. This is partly due to issues of jurisdiction and anonymity, partly due to the protection of internet speech under the First Amendment, and partly due to the lack of expertise and resources on online speech at various levels of law enforcement. Given this landscape, the problem of online harassment and hateful speech is unlikely to be solved solely by victims using existing laws; law should be utilized in combination with other practical solutions.”

Abstract: “Criminality in cyberspace has been the subject of much debate since the 1990s, yet comparatively little attention has been paid to technology-facilitated sexual violence and harassment (TFSV). The aim of this article is to explore the ways in which retraditionalized gender hierarchies and inequalities are manifested in online contexts, and to conceptualize the cause and effects of TFSV as “embodied harms.” We argue that problematic mind/body and online/off-line dualisms result in a failure to grasp the unique nature of embodied harms, precluding an adequate understanding and theorization of TFSV.”

Abstract: “Sexism and sexual harassment are not uncommon in online environments such as social networking sites, forums, and video games. This experiment investigated whether users’ anonymity and level of interactivity with sexist content on social media influenced sexist attitudes and offline behavior. Participants (N = 172) used a Twitter account that was anonymous or had personally identifying details. They were asked to share (i.e., retweet) or write posts incorporating a sexist hashtag. After exposure, participants completed two purportedly unrelated tasks, a survey and a job hiring simulation in which they evaluated male and female candidates’ resumés. Anonymous participants reported greater hostile sexism after tweeting than nonanonymous participants. Participants who composed sexist tweets reported greater hostile sexism and ranked female job candidates as less competent than those who retweeted, although this did not significantly affect their likelihood to hire.”

Abstract: “Launched in 2006, the growth of Twitter as a microblogging platform has been exponential, yet little research to date specifically considers women’s experiences of the medium. This article draws on a case study of the #mencallmethings hashtag, in which women describe and discuss the verbal abuse that they have received online from men. Providing a broad based context for the specific analysis of the #mencallmethings hashtag, I concentrate on the theoretical contributions made by western feminist research over the last 30 years to embed the aggressive harassment of women online in a wide review of types of threats to women. I argue that the harassment conveyed in the hashtag should be recognized as online sexual harassment, and a form of excluding women’s voices from the digital public sphere.”

Abstract: “Previous research indicates that women face a disproportionate amount of online harassment resulting from their identity as women. As a relatively new phenomenon, however, gender-based online harassment is not well understood. Social media platforms are a critical medium for gender-based online harassment and the effects of this harassment on women can be devastating both to their personal lives and to their professional careers. While the field of Information Studies is uniquely positioned to address the serious problem of gender-based online harassment, there are significant gaps in key areas of the literature related to this problem. Therefore, critical research is needed in order to produce key insights for empowering victims, for discouraging perpetrators, and for increasing awareness among social media platforms’ designers and managers. This knowledge can be grouped into three application areas: education, policy, and technological tools.”

Abstract: “A three-condition (rejection, criticism, control) experiment (N = 78) with gender treated as an additional factor and moderating variable examined gender differences in response to two types of threats to positive face — rejection and criticism — on a social-networking site. Results showed it did not matter if men or women were rejected or criticized on a social-networking site; both threats to positive face lead to more retaliatory aggression, compared to the control. However, men retaliated to a greater extent than women to both types of threats. Also, men responded differently to criticism than to rejection, while women’s results did not vary. Findings are discussed in relation to face theory and politeness theory, particularly in regard to computer-mediated communication.”

Summary: “The advent of the Internet, beginning around 1994, has not led to an improvement in civility or the quality of interpersonal relations. If subjective experiences are a guide, heavy users feel freer to take positions or espouse views that depart from our public values…. Since hate speech on the Internet is pervasive, rising, and unlikely to subside unaided, what should society do to counter it? Possible responses to Internet hate speech include those that one commonly hears with this type of utterance, including talking back to the aggressor. As we shall see, most of these avenues are even less efficacious than they are with ordinary speech. Because courts and legislatures are unlikely to tackle the Internet any time soon, while Internet providers and companies are even less likely to rein themselves in, new approaches are in order.”

Abstract: “Social networking sites and blogs have increasingly become breeding grounds for anonymous online groups that attack women, people of color, and members of other traditionally disadvantaged groups. These destructive groups target individuals with defamation, threats of violence, and technology-based attacks that silence victims and concomitantly destroy their privacy…. The social science literature identifies conditions that magnify dangerous group behavior and those that tend to defuse it. Unfortunately, Web 2.0 technologies accelerate mob behavior. With little reason to expect self-correction of this intimidation of vulnerable individuals, the law must respond. General criminal statutes and tort law proscribe much of the mobs’ destructive behavior, but the harm they inflict also ought to be understood and addressed as civil rights violations. Civil rights suits reach the societal harm that would otherwise go unaddressed and would play a crucial expressive role. Acting against these attacks does not offend First Amendment principles when they consist of defamation, true threats, intentional infliction of emotional distress, technological sabotage, and bias-motivated abuse aimed to interfere with a victim’s employment opportunities. To the contrary, it helps preserve vibrant online dialogue and promote a culture of political, social, and economic equality.”

Abstract: “Like writings that come before it, this article challenges the chestnut that freedom comes at the expense of another progressive good. Equality, to some writers; antisubordination, to others; ‘civil rights’ also serves…. Abuse and harassment pull valuable words out of the marketplace of ideas, I argue. They lessen the discourse. Also following in the path of other writings, this article notes a few higher stakes present in online speech as contrasted with its lower-tech antecedents. Electronic discourse adds anonymity, amplification, and permanence; within this medium, these conditions reinforce each other…. In this article, I advocate measures against abuse and harassment because (not ‘even though’) I cherish free speech.”

Abstract: “Sexism toward women in online video game environments has become a pervasive and divisive issue in the gaming community. In this study, we sought to determine what personality traits, demographic variables, and levels of game play predicted sexist attitudes towards women who play video games. Male and female participants (N = 301) who were players of networked video games were invited to participate in an anonymous online survey. Social dominance orientation and conformity to some types of masculine norms (desire for power over women and the need for heterosexual self-presentation) predicted higher scores on the Video Game Sexism Scale (i.e., greater sexist beliefs about women and gaming). Implications for the social gaming environment and female gamers are discussed.”