The list of gun deaths in the United States is a long and sad one, full of loss and unanswered questions. The murder of three North Carolina students in February 2015 had the marks of a hate crime — the victims were all Muslim — but reportedly could have originated with a dispute over parking. In April 2014 Elliot Rodger killed six people in Isla Vista, California, after years of psychological difficulties and failed attempts at intervention. Other killings, from Sandy Hook and Virginia Tech to Aurora and Fort Hood, are all unique yet crushingly familiar.

Given their tragic ubiquity in recent years, gun deaths are the subject of a growing body of literature on their causes, mechanisms and results, as well as the policy implications. The gun-homicide rate has fallen 49% since the mid-1990s in the United States, according to a 2013 Pew Research Center report, yet the Federal Bureau of Investigation (FBI) has found that the frequency of mass shootings has increased sharply. A 2013 study from the Congressional Research Service (CRS) found that at least 78 events took place between 1983 and 2012, and with some of the deadliest occurring after 2007. Much rests on the definition one uses, however: For the CRS, they were “incidents occurring in relatively public places, involving four or more deaths — not including the shooter(s) — and gunmen who select victims somewhat indiscriminately,” without a profit or ideological motive.

A 2014 report by the FBI, “A Study of Active Shooter Incidents in the United States Between 2000 and 2013,” provides an updated look at the statistics. The agency defines an “active shooter” as “an individual actively engaged in killing or attempting to kill people in a confined and populated area.” The FBI found that during the period studied, 160 active-shooter incidents took place in the United States, resulting in 486 killed and 557 wounded — 1,043 casualties in all. The report presents descriptive statistics from all the incidents, with details on the number of casualties and wounded in police forces and civil society, the resolution of the incidents, and a breakdown of the locations. 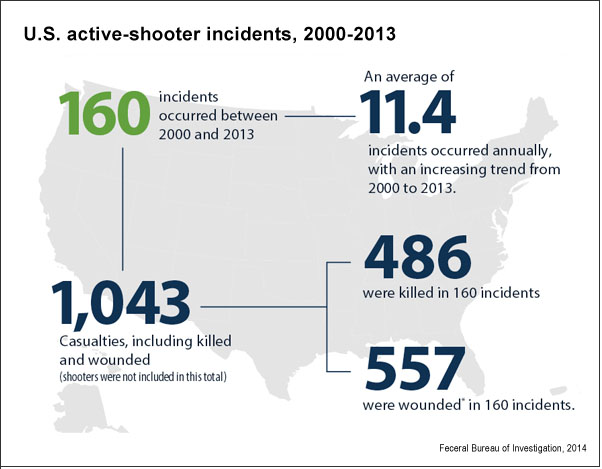 The outcome and resolution of active shooting events was also addressed in a 2013 study in Justice Quarterly, “Mass Shooters in the USA, 1966-2010: Differences Between Attackers Who Live and Die” by Adam Lankford of the University of Alabama. The author examines whether the offender’s living or dying during the incident is strongly correlated with his/her age, gender, number of weapons, attack location type, the number of victims killed or the number of victims wounded. The study is notable for its empirically rigorous, extensive dataset and exploration of the difference between those who commit murders and murder-suicides.

Given the suddenness of most active shooting incidents, recommendations point to the need for improved training of law-enforcement agencies. Lankford notes that further research should improve the quality and accuracy of the surveyed events; expand the time period under study; establish cross-country comparisons; and further analyze the role and involvement of law-enforcement agencies in these events.

Related research: The U.S. Constitution is one of just one of three in the world that protect the right to bear arms — the others are Guatemala and Mexico — and therefore American public policy approaches to reducing gun violence have tended to focus on the margins, at least in comparison to other developed nations. Research has looked at zero-tolerance policies, rates of homicide during psychotic episodes, the influence of self-defense laws, the potential role of gun dealers and pawnbrokers in illegal weapons sales and statistics relating to youth and minorities involved in such violence.