In the aftermath of the recent Navy Yard shootings in Washington, D.C., which left more than a dozen people dead, questions continue to swirl about the gunman, Aaron Alexis. A former Navy reservist and Defense Department contractor, Alexis never saw combat overseas, but evidence of his troubled mental condition — which his father told the Wall Street Journal stemmed from post-traumatic stress following 9/11 — has once again highlighted the emotional strains often placed on veterans. Whatever the situation with Alexis, many vets fear that the incident again unfairly feeds into age-old stereotypes.

The Navy Yard attack also comes on the heels of the high-profile murder of Navy SEAL sniper Chris Kyle by a struggling fellow veteran in February 2013, as well as a recent report published by the Department of Veterans Affairs, which estimates that every day 22 veterans commit suicide. Some believe that figure actually underestimates the problem.

Medical and social science research can provide better understanding and guide deeper media coverage as America continues to grapple with the legacy of its recent wars. The Journalist’s Resource project has curated many studies and reports in recent years for this purpose. Below are some new studies and papers that may be of use:

PTSD, a mental condition that is triggered by memories of an especially disturbing event, can involve many painful symptoms, including nightmares, flashbacks and depression. Given that these symptoms can affect many people to some degree, diagnosis of PTSD is notoriously difficult. Earlier this year, New York University announced the launch of a five-year study in which researchers will look for specific biological signals (“biomarkers”) that could provide more reliable evidence of PTSD.

Although the Department of Veterans Affairs (VA) publicizes treatment options for mental health disorders, the authors of a 2013 study published by the American Psychiatric Association note that Afghanistan and Iraq veterans must overcome many barriers when seeking this type of help. In addition to the general stigma associated with mental health treatments and the logistical challenges of dealing with the VA, results from the study indicate that one of the largest barriers to care was “concern about the anticipated treatment experience,” which 40% of the 143 veteran participants expressed. “Emotional readiness” was also reported by 35% of respondents as a barrier to seeking treatment. In light of these findings, the authors conclude: “To increase mental health treatment seeking among veterans returning from duty with PTSD symptoms, providers must first clarify for veterans what they can expect from treatment and the treatment options available and address their concerns about readiness for treatment.”

Despite these barriers, many veterans are exploring ways to deal with PTSD. Richard J. McNally of Harvard University and B. Christopher Frueh of the University of Hawaii discuss the issue in their July 2013 paper, “Why are Iraq and Afghanistan War Veterans Seeking PTSD Disability Compensation at Unprecedented Rates?” Published in the Journal of Anxiety Disorders, this study opens by noting that in the spring of 2012, 45% of veterans of the Afghanistan and Iraq wars had applied for “service-connected disability compensation for psychiatric and nonpsychiatric medical problems,” whereas the percentage for World War II, Vietnam and Persian Gulf War veterans who received disability compensation for any reason are 11%, 16%, and 21%, respectively. McNally and Frueh explore a number of possible explanations for this, including delayed onset PTSD, the mistaking of general emotional distress for PTSD, and the difficulty of chronic unemployment. 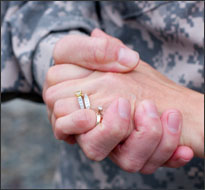 Unemployment continues to be another key challenge for veterans of the Iraq and Afghanistan wars. According to the Bureau of Labor Statistics, the unemployment rate for Iraq and Afghanistan veterans is 10%, notably higher than the national rate of 7.3%. With Secretary of Defense Chuck Hagel’s announcement of a comprehensive review of security clearance procedures in light of the Navy Yard shootings, the Washington Post profiled veterans who are concerned that the incident will further hurt employment chances for veterans. A Congressional Research Service report provides a comprehensive look at recent programs and trends in this area.

In a recent study, “Unemployment, Earnings and Enrollment among post 9/11 Veterans,” Meredith Kleykamp of the University of Maryland looks beyond some of the descriptive statistics on veterans’ unemployment, which she believes “fail to reveal the full portrait of economic reintegration.” The paper, published in the journal Social Science Research, looks at economic-reintegration measures and also examines the claim that military service provides upward mobility for disadvantaged groups. While the results confirm that military service appears to be associated with higher unemployment rates (11.48% for veterans vs. 7.77% for non-veterans), veterans who are employed earn higher wages on average than their non-serving counterparts ($16.3 vs. $14.48).

The author notes that veterans are more likely to be enrolled in college: “Male veterans have a 9.5 percentage-point advantage in college enrollment after adjusting for demographic differences, with nearly a third of all male veterans predicted to be enrolled. Among women, veterans showed an 11 percentage-point increase over their civilian peers, with 34% predicted to be enrolled.” Kleykamp also highlights that comparing Afghanistan and Iraq veterans with other veterans might not always be possible or helpful: “As the ﬁrst generation to ﬁght wars on two fronts with only volunteers, approximately 15% of whom are women, their post-military experience may be unique in comparison to earlier generations of men who fought in wars largely as conscripts, or who served in peace as volunteers.”

One such example is The Mission Continues, a non-profit founded in 2007 that works to help post-9/11 veterans transition back to life at home by using their leadership skills in a civilian setting. The organization connects “fellows” with nonprofit organizations and supports them while they perform 20 hours of service a week for 26 weeks. A study carried out by Washington University in St. Louis indicates some positive results stemming from the program: 86% of participants reported that the Fellowship Program was a “positive life-changing experience” and after completing the fellowship “71% have furthered their education; 86% have transferred their military skills to civilian employment; and 91% have built networking opportunities for a future career path.”