A growing number of research organizations are not only placing their data online, but giving users free tools to help visualize it. This overview of a few of these resources focuses especially on economic and development indicators.

For a journalist new to this beat, the trickiest part of the job can be knowing what data to include. We won’t cover that here. But fortunately, most of these resources offer explanations about what each of the indicators means and how it is calculated. The websites also usually allow you to download the raw data.

Before we get started, it helps to have a good idea of when to use a line chart (data over time), a bar chart (comparing different units) or a pie chart (comparing proportions) for different types of data. This explainer by the commercial data visualization company Tableau should help.

FRED is one of our favorite resources for domestic economic and social data. Run by the Federal Reserve Bank of St. Louis, it is easy to use and allows visitors to export charts or embed them into a website with data that updates automatically. Yes, even as your page ages, your data will stay up to date.

How does it work? First, select an indicator, such as median household income. Then, by clicking on the orange “edit graph” button at the top right, you can add a second indicator to compare data. You also can use this feature to customize the graph: add units on the left and right Y-axes to compare two different indicators; change the color and other visual aspects of the layout. If you do embed the graph within your webpage, you can change the pixel dimensions in this edit section.

For example, the blue line in the chart embedded below shows the real median household income in the United States over the past 34 or so years (the left Y-axis unit is dollars). “Real” means the income was adjusted for inflation — if it were not, the income would appear to be rising continuously, which would be misleading. “Median” means it is the middle value — not an average that can be thrown off by billionaires and such. The red line is the unemployment rate (the right Y-axis unit is percentage points) and the gray shaded areas are recessions.

Interpretation: The blue line suggests that real incomes only began to return to pre-2008 Great Recession levels in 2015. The red line tells you that this happened as the unemployment rate fell. As more people find work, wages rise.

Here is another example: the number of marriages in the U.S. Again, note that the left and right Y-axis units are not the same. But by comparing two lines over time, we see that though the total number of married people is rising every year (blue line), the rate appears to be slower than in the past (red line).

Here we have fertility rates over time in New Zealand. To compare it to other countries — say, Indonesia and Namibia — go to the orange “edit graph” button and “add line.” Start typing a country. One should pop up. And then the topic: fertility. Make sure it is the same indicator (in this case, “fertility rate”) as the first line.

In this case, note the smooth curves for Indonesia and Namibia. That suggests the data was collected less frequently or that it is only an estimate. Also, if you go to the page where we made the chart (or click “customize” at the bottom of this chart, which will also lead you there), note the sources. Often international stats are from the World Bank or United Nations.

Another FRED feature is GeoFRED – clickable, interactive maps. These can be embedded, too, though the zoom feature does not work well and viewing particular locations can be tricky. Here are a few examples.

The percentage of each country’s population that is above age 65 (a proxy for estimating the need for social services spending):

Net migration (the number of people moving in and out) by country.

The World Bank, a multilateral lender with 189 member countries, has a clean data visualization interface, though it is far less customizable than FRED (and its HTML embeds do not support the latest security protocols, so here we are using screenshots). Economics, development, demographics and health — this catalogue indicates that there is little the World Bank doesn’t study.

Just start typing in an indicator and a graph will pop up. An example: GDP per capita. Type that in and you’ll get a nice chart of global GDP per capita: 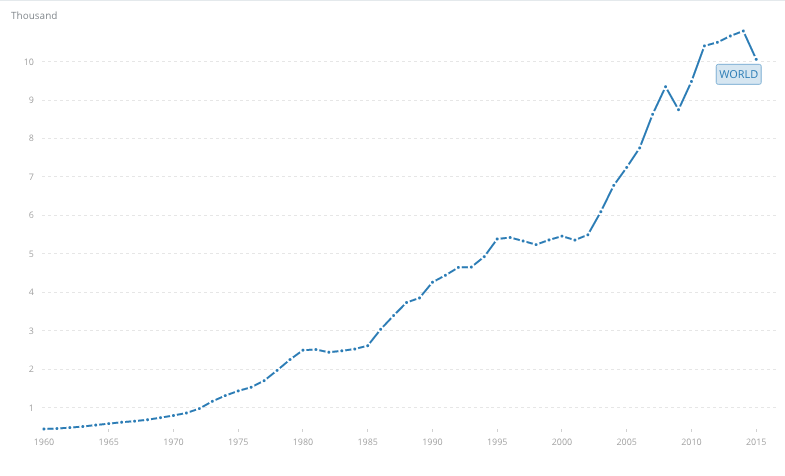 So, the average Earthling’s economic footprint is worth a little over $10,000 a year. That doesn’t really mean anything. Add a country. Here we’ve chosen Russia. This tells us that the last few years have been hard in Russia as the economy has contracted: 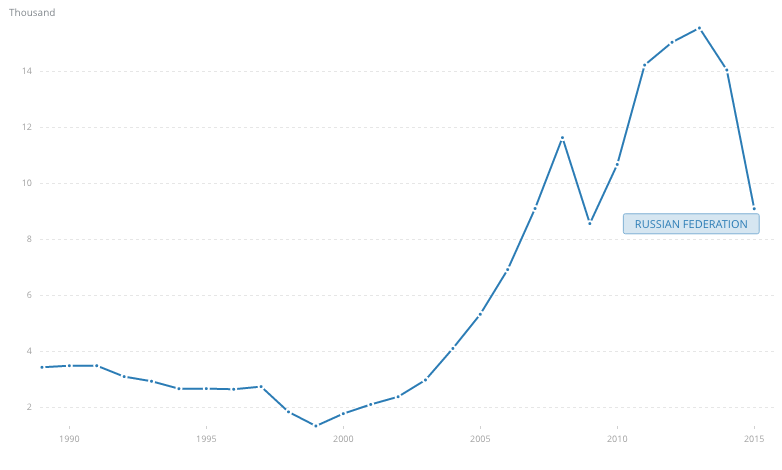 If you select more than one country, you can compare them with a line chart, or, if you wish to show several countries at one point in time, a bar chart. Or — if the data lends itself — create an interactive map. This is the total GDP for the “Group of Seven” industrialized nations (G7) plus Russia (it used to be the G8) since 1990: 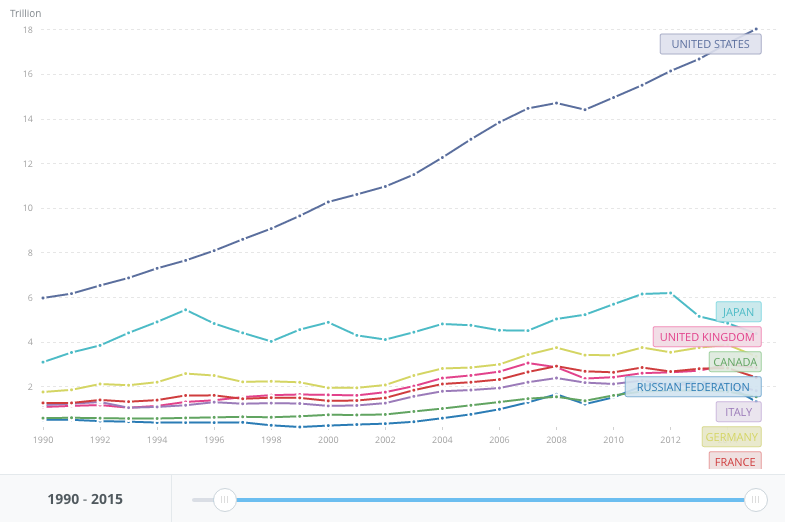 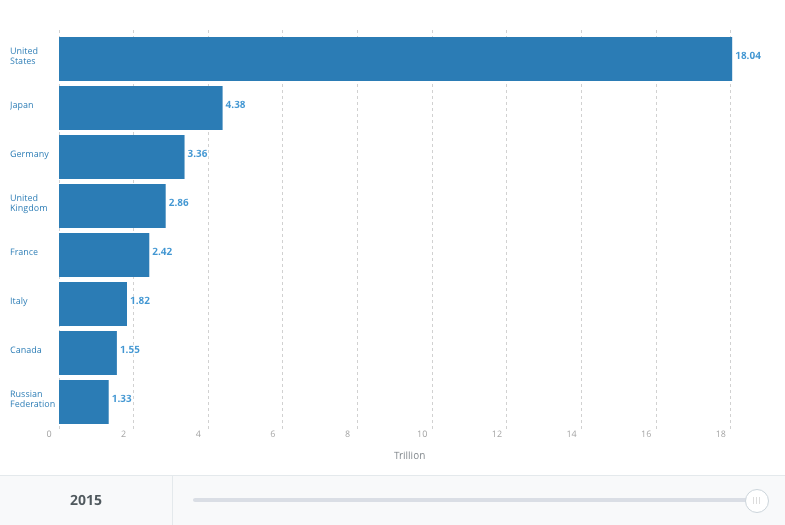 The website of the OECD, a think tank run by 35 rich countries, is a source — as the name suggests — of many economic and development statistics, but also much more: education, demographics, agriculture and pensions, for example.

The OECD’s chart creator is less straightforward than FRED or the World Bank’s. Sometimes it works beautifully, but some data lives under a rubric called “Stats” — an older, less user-friendly format that is harder to chart. Here, consider downloading the data and charting it in Excel, or use one of the third-party tools discussed below.

How much did primary school teachers with 15 years’ experience earn in 2012, compared with what they earned in 2005, in each of the OECD member countries? (Note the benchmark: The year 2005 is assigned 100 percent. The data is from seven years later. In most cases salaries rose, but in some they fell.)

For the G8 nations, investment in research and development as a share of GDP over the past 20 years:

Hover over the lines to see exact values and years.

Here is similar data in the OECD’s Stat format. There are more indicators available, but the charting capabilities are less dynamic.

Often, some of the OECD databases are so large that the figures do not readily lend themselves to charts. If that happens, you may have to select, “Click to Access: Data” and uncheck some variables, such as countries or years, to make the data fit on a single chart. Moreover, exporting is not always as simple as with FRED. You can export as Excel data and then use Excel to make a chart. Or you can take a screenshot and paste the image into your story (print resolutions can be quite low, though).

The OECD offers some ready-made embeddable charts and graphics for its more straightforward data. Its Compare Your Country feature pictures key indicators for advanced economies, such as number of students per computer in a school, the number of minutes students spend on the internet, measurements of income inequality, and how energy consumption is taxed.

Below is government spending as a share of GDP in the G7 countries (a proxy for the size of government). Hover over the lines for data:

Web developers can also export the data to use in their own custom APIs (application programming interfaces).

The WHO, which is part of the United Nations, publishes ready-made maps and graphs displaying health data as part of its Global Health Observatory project. These maps are less customizable, but the country-level data is available to download as Excel files.

For example, here is a map of countries overlaid with data on life expectancy at birth. And here is one on traffic deaths.

Atlas is a quick way to search all of the visualizations used by Quartz — the digitally native, tech-heavy publication owned by Atlantic Media — and download the data or embed the charts for free. With a free subscription, you can also upload data to build your own web- and mobile-friendly charts.

Wish to customize charts with your own palate and fonts — without another organization’s logo? A number of visualization tools, some available by subscription, are now on the market, such as Infogr.am, Tableau and Weave. (Each has a free version; we do not endorse any of them.)

If you are comfortable with a little coding, Google Charts is a new tool offering a free library of customizable charts.

See our other tip sheets on data journalism.