American home prices have reached levels not seen since shortly before the Great Recession brought the market crashing down in 2008, according to the Case-Shiller Index, a celebrated benchmark. Rents in western cities are rising at more than twice the rate of inflation, says the Federal Reserve Bank of Kansas City. Meanwhile, notes the Census Bureau, the rate of homeownership nationwide in 2016 was lower than it had been in 49 years.

Yet, according to the National Association of Realtors’ Housing Affordability Index — a gauge based on federal data — American homes are, by historical standards, quite affordable.

There are many ways to measure the housing market and its impact on the overall economy. Some data are published by the federal government; some come from the private sector. And as with any statistics, they can be spun to grab attention or frustrate the curious.

This tip sheet offers journalists an introduction to the type of housing data and indices available and how they are often used. Most of these data are time-series, allowing comparisons over years.

U.S. Census Bureau:
Many of the best government resources are available from the U.S. Census Bureau, a wing of the Department of Commerce. The Census offers customizable charts that can help journalists create a region-specific visualization. Most data can be downloaded as spreadsheets for further analysis.

American Housing Survey (AHS)
The Census Bureau calls its biennial AHS the most comprehensive housing survey of major American cities. It is funded by the Department of Housing and Urban Development (HUD) and provides current information on a range of subjects “including size and composition of the nation’s housing inventory, vacancies, fuel usage, physical condition of housing units, characteristics of occupants, equipment breakdowns, home improvements, mortgages and other housing costs, persons eligible for and beneficiaries of assisted housing, home values, and characteristics of recent movers.” Each AHS also measures different topical data; the most recent included household health and safety hazards and food insecurity, among others. Earlier surveys included data on public transportation and disaster preparedness.

New Residential Construction
Economists often refer to “housing starts” — the number of new house foundations begun during the previous month — to describe consumer demand nationwide. The St. Louis Federal Reserve Bank publishes a handy, updated graph of housing starts dating back about 60 years. Because construction is sensitive to the weather, the number is highly volatile and is often seasonally adjusted. Don’t read too much into a single month-over-month change.

New Residential Sales
This page provides national and regional data on sales of new single-family units each month, including data on the state of construction, as well as median and average sale prices.

Annual Characteristics of New Housing
“This page provides national, annual data on the characteristics of new privately-owned residential structures, such as square footage, number of bedrooms and bathrooms, type of wall material, and sales prices. Many characteristics are available at the region level.”

Housing Vacancies and Homeownership
These data, published quarterly, include rates of homeownership and empty rental homes, as well as descriptive information about vacant homes. The data are “used by the federal government and economic forecasters to gauge the current economic climate.” They include demographic information on homeowners and median family income.

Geographical Mobility
In November 2016, the Census Bureau reported that the number of Americans moving between homes had fallen to a historical low. Just 11.2 percent of Americans moved in 2016, down from 11.6 percent in 2015. The data include demographic information (African-Americans and Asian-Americans were most likely to move; whites were least likely) as well as motivations: “20.2 percent said they moved for an employment-related reason.” Information is also available for people who moved to a new county or state: “New York had 69,289 migrants to Florida, and California had 65,546 migrants to Texas.” Plus, “over 1.5 million people living in Florida were born in New York.”

The Census Flows Mapper allows users to visualize these trends. Migration statistics since 2010 are also available through Census’s API (application program interface), for developers who wish to use the data in their apps.

Department of Housing and Urban Development:
HUD publishes a quarterly National Housing Market Summary with a detailed and readable narrative. It draws on some of the same data as the Census Bureau’s AHS, but also includes mortgage rates, defaults and Federal Housing Administration (FHA) loans — mortgages that include government-backed insurance and thus allow riskier clients to receive home loans. On the same page, HUD also publishes quarterly assessments of the health of housing markets in each of 10 regions nationwide, along with reports for each state and many large metropolitan areas.

Other government data:
The Bureau of Labor Statistics, an arm of the Department of Labor, publishes useful data on consumer expenditures and inflation.

Housing Affordability Index (HAI)
One common yardstick is the Housing Affordability Index, published by the National Association of Realtors, a research and lobby group in Washington, D.C. Using data from the Census Bureau and the Federal Housing Finance Agency (a government body tasked with regulating mortgages), the HAI measures the percentage of Americans that can afford the monthly mortgage payments on a median-priced home. The Federal Reserve Bank of San Francisco calls the HAI “a way to track over time whether housing is becoming more or less affordable for the typical household. The HAI incorporates changes in key variables affecting affordability: housing prices, interest rates, and income.”

A value of 100 means that a family with the median-income has just the right amount to purchase a median-priced home. Above 100 means more households can purchase that home. Since 2013, the HAI has been falling, indicating that home prices are rising faster than incomes. But the HAI is still far above averages in recent decades. (See HUD chart below.) 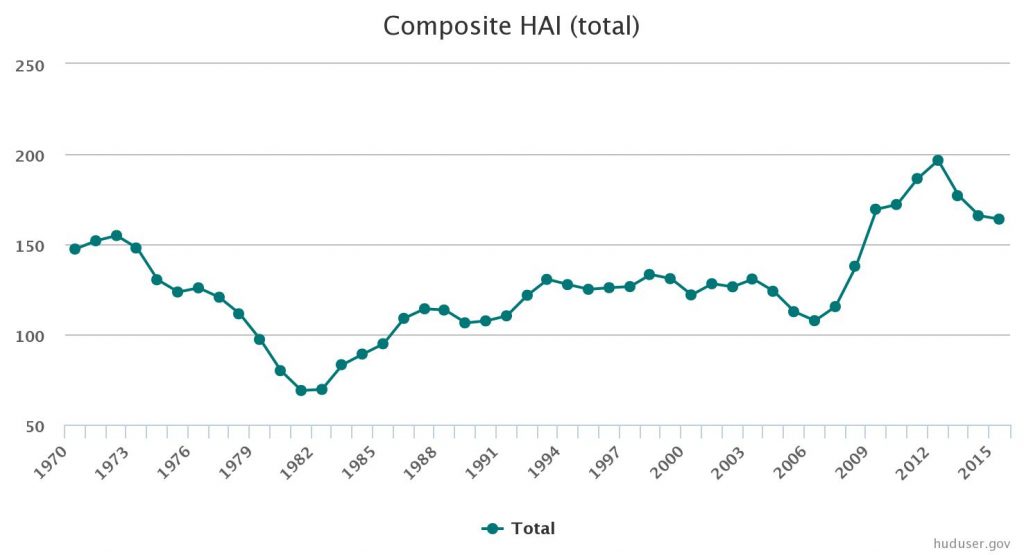 House Price Index
The Federal Housing Finance Agency, the regulatory body contributing mortgage rate data for the HAI, publishes the House Price Index. The HPI tracks the prices of homes across a broad section of the economy every quarter by measuring price changes – expressed as a percentage – on the same properties over time. Each month it summarizes nine regions and each quarter it includes data for all 50 states and 382 metropolitan areas. The Agency publishes its latest HPI report here.

Case-Shiller
Another index often cited by journalists is the S&P CoreLogic Case-Shiller Home Price Index, or Case-Shiller for short. The index is calculated monthly based on a methodology designed by academics Robert Shiller and Karl Case that tracks the value of single-family homes adjusted for the quality of the homes sold. S&P Dow Jones, the financial data firm that manages the index, also publishes Case-Shiller indices for specific cities and composite indices for the top 20 metro areas.

National Delinquency Survey
Published by the Mortgage Bankers Association (MBA), a lobby, the National Delinquency Survey is often cited as a measure of overall economic health (some of the findings are behind a paywall). When a rising number of homeowners are delinquent on their mortgage payments, or foreclose, the economy is in trouble. In 2016, MBA announced the delinquency rate had fallen to its lowest level in 10 years, indicating the economy is continuing to recover from the Great Recession.

A number of private-sector firms publish headline-grabbing market research, including Zillow, the popular online information clearinghouse that has been criticized for its automated home price estimates.

The Residential Price Index, by FNC, Inc., is another established benchmark. It excludes foreclosed properties.

Joint Center for Housing Studies of Harvard University publishes a notable annual report, “The State of the Nation’s Housing,” that analyzes key trends. The Center also manages a list of think-tanks, non-profits and industry associations that conduct housing research.

A November 2016 working paper from the National Bureau of Economic Research finds that cost-of-living indices fail to account for how rising rents disproportionately impact the poor.

Other research at Journalist’s Resource:

We reviewed a University of Pennsylvania study on how home buyers and sellers anchor their price expectations and behave during transactions.

A 2014 roundup looks at academic research on gentrification and affordable housing.

This 2013 report explains how the Case-Shiller index demonstrated a rebound in the housing market at the time.

Housing prices and affordability: Where to find data