Media scholar John Wihbey, an assistant professor at Northeastern University, co-authored a recent study that found a clear link between the Twitter accounts journalists follow and the partisanship of their published work. In his new book, The Social Fact: News and Knowledge in a Networked World, Wihbey examines the issue in greater depth, raising questions about how journalists use social media to report the news. The book also calls attention to a challenge many newsrooms face — journalists’ struggle to gain competence in reporting about numbers and research.

Wihbey’s book is based partly on data he obtained from us here at Journalist’s Resource. Each year, we survey journalists and journalism faculty and ask questions such as: How important is it for journalists to interpret statistics from sources? On your own, how well are you equipped to do statistical analysis? What are some of the barriers to your using academic research more often in your journalism?  (We’ll be sharing some of the results of the 2019 survey in an upcoming article on JR.)

Wihbey, a former assistant director of JR who continues to help with our annual survey, analyzed the responses we received to identify patterns and problems.

His overall advice, which he explains in a piece he wrote for The Conversation: Reporters should spend more time studying math than they do studying Twitter.

We reached out to Wihbey  via email to ask more about his book and what he thinks journalists can learn from his research. Below are our eight questions and his answers, which offer insights on rebuilding public trust, cultivating diverse sources and developing statistical literacy.

In case you’d like a peek at the book, Wihbey gave us permission to share Chapter 7, “Journalism’s New Approach to Knowledge,” which draws on data from our surveys.

Journalist’s Resource: What are the top three things you’d like journalists to take away from your book?

John Wihbey: First, I’d like to think they could come away with a deeper sense of how information networks typically behave, how they open up opportunities for both reporting and listening but how they also have structural biases and readily surface misinformation and false trends. The book really tries to dig into the network science literature and pull together some useful material. Second, the book emphasizes the degree to which knowledge and subject matter depth is key to successful and valuable reporting. I try to make a strong case, which echoes the mantra of Journalist’s Resource itself, that we need to take journalism to a new level in this regard. Finally, the book tries to situate our historical moment in the broader sweep of media history. I think it can be empowering to see the changes in the media business as part of a long history of disruption, both culturally and technologically.

JR: In the book, you explain how you examined journalists’ Twitter networks and found a link between the partisanship of the accounts that a journalist follows on Twitter and the partisanship of his or her work. Can you talk more about how journalists are or could be influenced by whom they’re interacting with on Twitter and whether they should be intentionally following and interacting with people holding diverse opinions on a range of issues?

Wihbey: The section of the book to which you are referring came out of a study we did that was published in New Media & Society. I should note that we did not design the research to look for causation. We merely noted a correlation, in an attempt to show the dangers that may be present in terms of partisan sorting and a potential through-line from news media to social media and back. Spending a lot of time within social networks certainly may color an individual journalist’s view of what is true and interesting. As journalists, we have to be careful to recognize the limits and constraints of our environments. Something may be trending in the online world that we construct (and that is algorithmically influenced), but it may not be as important as many other stories that are unfolding in other spaces. I do think that ensuring an intellectually diverse set of sources is crucial. We need to be more aware of how digital spaces construct our sense of reality. 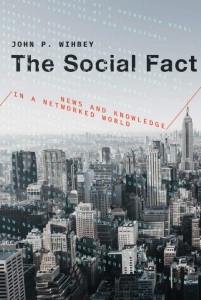 JR: If news outlets have a left- or right-leaning partisan slant and the partisanship of journalists’ Twitter networks tends to show in their work, then can members of the public really rely on the news media to provide the facts they need to know in a clear and unbiased way?

Wihbey: I would contend that there is no real monolith that constitutes “the news media.” There are thousands of individual journalists operating within diverse institutions. There may be general tendencies and trends that characterize some journalists, but they have fierce codes of independence. The profession is full of brilliant and dedicated people. We should have every expectation that as individuals, journalists are striving toward producing clear and unbiased work. And I think we need to renew the call for greater depth and independence as polarization accelerates within society.

JR: In your book, you draw on data that Journalist’s Resource has been collecting through surveys for several years. Can you talk about why you decided to use this information and how it contributed to your findings?

Wihbey: We launched the first survey in 2015, and we’ve done a bunch of surveys since then. It’s completely fascinating work, and it’s been an honor to help oversee these surveys. We’ve asked a lot of questions about how journalists and journalism educators prepare for their work, how they see the world, how they execute their jobs, and what their aspirations for the future are. It’s a rich dataset from a large community of people involved in media. I’ve drawn on it because it paints a nuanced and textured picture. The survey datasets contributed to the book in an overall sense insofar as they provided me with a reasonably accurate, though evolving, picture of what journalism is currently and where it needs to go.

JR: Is it reasonable to expect most or all reporters to be able to interpret statistics and do their own statistical analyses?

Wihbey: Probably not. Obviously, much depends on one’s particular beat and job needs. In general, I think being able to interpret statistics from sources is crucial. As a baseline, statistical literacy is very helpful in terms of being able to vet claims and detect misinformation. Likewise, having basic data literacy — the ability to, for instance, manipulate data in rows and columns — is a corollary skill that I think is necessary, as well. That said, I’m not sure every journalist should be able to perform statistical analysis, or run a regression analysis or whatnot. However, it’s not a bad thing to at least understand the underlying concepts involved in statistics, whether it’s sampling, [statistical] significance, probability or causation. It can sharpen our thinking and make us less susceptible to slips in logic and framing.

JR: You’ve said you see your book as sort of a Part 2 to the book, Informing the News, by Harvard Kennedy School Professor Tom Patterson, who helped found Journalist’s Resource and serves as its principal investigator. How does your book build on Tom Patterson’s book?

Wihbey: I should hesitate to suggest my work is even remotely in the same category as Professor Patterson’s! Still, I consider his work hugely influential on mine. He and I had many conversations about how my research might take up his challenge and idea of knowledge-based journalism and see how it might apply in the context of social media and a world of increasingly democratized publishing.

There is a big movement in journalism toward greater audience engagement and social listening. But I think it’s in need of richer thinking and theoretical grounding; we need a greater sense of purpose other than just getting clicks and likes, or just getting people talking. I wanted to articulate how the move toward knowledge is the essential ingredient for engaged journalism. In the book, I say that knowledge-driven journalism fuels a virtuous cycle in the online world: journalists must be able to grasp and articulate the stakes for citizens in issues. Increasingly, for citizens to engage in issues that have complexity, they need a level of understanding to organize. The more engaged citizens are, the more they will be informed, as interest in issues is an incentive to learn. By knowing more, journalists are therefore more likely to engage the public.

In one respect, our work around knowledge-based journalism has to grapple with the old Lippmann-Dewey debate, which for nearly a century has framed up an enduring divide between top-down expertise and gatekeeping ([Walter] Lippmann) and bottom-up grassroots learning and agenda-setting ([John] Dewey). Tom Patterson and I talked a lot about how to, in a sense, resolve this debate by emphasizing the application of knowledge within networked practice – knowledge by the journalist as the key to public engagement. I’m in Tom’s debt for the good suggestions in this regard. I think the social web opens creative possibilities that were not available to Lippmann and Dewey. I hope my book provides a somewhat convincing account of how we can be both smarter as journalists and more engaged with the public.

JR: To whom would your book be most useful: individual journalists or newsroom managers?

Wihbey: I would hope that both might take something away that is useful or thought-provoking. For individual journalists, I think the discussion can help provide greater critical reflection on practice. For editors and news leaders, I hope it might clarify the mission of good journalism in a networked environment, where journalists are publishing material alongside millions of other publishers and voices on social platforms. In this regard, I think my central idea of trying to foster mutual “networks of recognition” is useful in terms of clarifying the civic function of journalism in a networked age.

JR: If you could offer journalists one tip for helping them rebuild public trust, what would it be?

Wihbey: I believe the current movement in journalism toward greater transparency regarding [reporting] methods is vital. But increasingly I’ve come to believe that it’s important for journalists to find ways to highlight uncertainty — what is not known, leaving open the possibility for revision, iteration, and admission of error. I think the public would respond positively to a humbler and more careful journalism, a journalism that proceeds a bit more like science and social science. This is not to say that everything needs to be hedged and boringly conveyed. But it needs to allow for the possibility that the first draft of history is just that – a draft; it will likely be radically revised as more information comes along. Trust will not come back instantly. But framing journalism more as an iterative process, and less as a final, deliverable output, may help open up space for the public to engage and help co-create knowledge.

Chapter 7 from The Social Fact: News and Knowledge in a Networked World by John P. Wihbey, © 2019 by John P. Wihbey. Reprinted by arrangement with the MIT Press, Cambridge, MA. www.mitpress.com.

by Denise-Marie Ordway, Journalist's Resource
May 23, 2019