Reminding parents how many days of school their kids have missed and the importance of regular attendance may be a simple, low-cost way to help curb absenteeism in elementary schools, a new study suggests.

Researchers found that sending families personalized letters stressing these two points resulted in a 14.9 percent reduction in chronic absenteeism in the 10 rural, suburban and urban school districts in California they studied. The authors claim the study, published in December 2018 in the American Educational Research Journal, presents “experimental evidence on how to improve student attendance in grades K-5 at scale and has implications for increasing parental involvement in education.”

A similar but larger study published earlier in 2018 also found that student attendance improved after families in Philadelphia received letters telling them how many days their children had been absent and asking for help improving their attendance. That study, which targeted high-risk students in kindergarten through 12th grade, found that chronic absenteeism fell by at least 10 percent among students whose parents received the mailings.

Education leaders have been trying for years to find ways to improve attendance, especially among low-income students, many of whom need extra help in class. The DOE has called chronic absenteeism “a hidden education crisis.”

Prior research indicates the importance of regular attendance for all kids. Students with better attendance rates tend to earn higher test scores and are less likely to be held back a grade.

Todd Rogers, a co-author of this new study who also led the study focusing on absenteeism in Philadelphia, said these mailings seem to be an easy way to reach parents and encourage change without spending a lot of money. The total cost of the mailings, sent to families several times a year, was $6.60 per household per year in Philadelphia and about $5.68 per student per year in California.

The intervention also is easy to scale, Rogers said, and is substantially cheaper than other common methods for reducing absenteeism — assigning students to mentors or social workers, for example.

Rogers, a behavioral scientist who is a professor of public policy at Harvard Kennedy School of Government, said he and other researchers have experimented with the mailings in other school districts and seen similar reductions in absenteeism. In Chicago, for instance, researchers found an 11 percent reduction in chronic absenteeism. Rogers co-founded an organization called In Class Today, which currently is working with 30 school districts on tailored mailings aimed at boosting attendance.

But the mailings are not meant to replace other interventions. Instead, they help free up resources to allow school districts to “go after the harder, structural reasons” behind student absenteeism, Rogers said.

“It’s going to be a combination of lots of effective interventions,” he said. 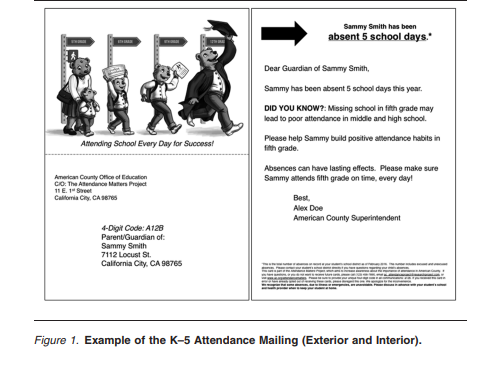 The new study, titled “Reducing Student Absenteeism in the Early Grades by Targeting Parental Beliefs,” focuses specifically on the early grades, which, the authors explain, could influence attendance in later grades, including high school. The authors also chose to focus on the early grades because parents have more control over many of the factors that affect young children’s attendance.

“Particularly in early grades, parents have influence over … transportation to and from school, communication with the central office, and planning vacations,” write the authors, a team of researchers from Harvard and Stanford universities and Boston College.

The researchers targeted the families of students in kindergarten as well as students in grades 1-5 who had the highest absentee rates during the previous academic year.

Some families were randomly assigned to receive the mailer while others were randomly selected to receive the mailer plus a supplementary insert that encouraged parents to rely on their social networks for help getting their kids to and from school. Families assigned to the control group did not receive either. A total of 10,967 California households comprised the sample.

Parents chosen to receive any printed materials got them an average of five times during the school year. Spanish-speaking households received materials in Spanish.

At the end of the year, researchers conducted 15-minute phone surveys to try to gauge whether the mailings affected parents’ beliefs.

Looking for more research on elementary schools? Check out our write-ups on school lunches, school uniforms and school vegetable gardens. We’ve also compiled research on the benefits of students having teachers of the same race.

Journalist’s Resource received permission to use an image of the example of the mailing sent to California families. This image was copied from the December 2018 published study.