On July 17, former special counsel Robert Mueller is scheduled to testify in public hearings before the House Judiciary and Intelligence committees. The subject: his “Report on the Investigation into Russian Interference in the 2016 Presidential Election,” more commonly known as the Mueller report.

The report was made public April 18. Weeks later, on May 29, Mueller finally made a public statement, during which he stressed that the report “speaks for itself.”

Mueller’s report is historic and important. It’s also 448 pages long. Knowing most people haven’t made time to read the whole thing, Harvard Kennedy School professor Tom Patterson has created an abridged version of 123 pages: “Summary of the Mueller Report, for Those Too Busy to Read It All.”

“Although I had intended for weeks to read the Mueller Report, I hadn’t found the time, despite its importance,” says Patterson, the Bradlee Professor of Government and the Press at the Harvard Kennedy School and the research director of Journalist’s Resource. “It occurred to me that a lot of other Americans might be in the same boat. I abridged it for them.”

Patterson’s abridged version focuses on the question of whether President Donald Trump obstructed justice by trying to impede the investigation into Russia’s interference in the 2016 presidential election.

“It is the portion that raised the issue of whether Donald Trump had committed impeachable offenses,” Patterson writes in the introduction to his summary. “Impeachment is not an action to be taken lightly, or without taking public opinion into account. It is in this context that ‘informed’ public opinion is critical. Impeachment action undertaken, or blocked, for purely partisan reasons is unworthy of America’s democracy. A careful weighing of the known facts is vital. The Mueller Report lays out those facts, allowing each of us, as citizens, to judge the issue.”

Via email, we talked to Patterson about how and why he created this new version of the report. Below are our questions and Patterson’s responses, which have been lightly edited to reflect Journalist’s Resource’s editorial style. 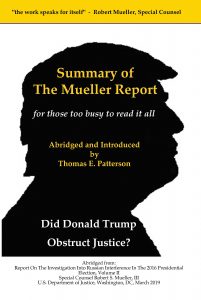 Journalist’s Resource: A Google search yields many summaries of the Mueller report. But your abridged version is different in that you don’t paraphrase anything; with the exception of the introduction, all the words in your abridged version come directly from the original report. Why is it important to read the report in the legal team’s own words?

Patterson: In his first public statement after release of the report, [then] special counsel Robert Mueller said the report “speaks for itself.” Upon reading it in preparation for the abridgment, I found his statement to be accurate. As a result, my goal was to faithfully reproduce it.

JR: An important question for careful editors everywhere: How did you ensure that your interpretations of the facts didn’t influence what you chose to delete?

Patterson: I was careful not to delete anything that might alter the report’s findings or affect the interpretation that a reader might derive from the content of the original report. I invite anyone with the time or interest to compare the original with my abridgment to test the fidelity of my effort.

The abridged version is based on Volume II of the Mueller report, which focuses on the question of whether Donald Trump obstructed justice. Within that constraint, virtually all of my deletions were of three types. First, I deleted all the footnotes — the great majority of which provided the date of a particular interview, news story or event. Second, redundant material was cut — there’s a lot of repetition in the report. Third, peripheral material was cut, much of which referred to numbered statutes and court cases – useful to readers with legal training but otherwise a bit like trying to make sense of an unfamiliar foreign language.

JR: Having studied the Mueller report, what do you think has been missing from news coverage so far?

Patterson: In the first day or two after the report’s release, there was a focus on the actual findings in the report. Since then, the voices we hear in the news are those of partisans who would impeach, or block impeachment, based on what they claim the report says. There’s a lot of material in the report that could be the basis for thoughtful non-partisan analysis. The evidence in the report doesn’t point in one direction only. News stories of that type are what’s in short supply.

JR: You end the introduction by saying, “I leave the judgment of whether President Trump obstructed justice to you, the citizen reader.” That is a question Mueller may be pressed to answer on July 17. For readers who are not legal scholars, could you offer some advice for how to determine whether an action meets the definition of “obstruction of justice?”

Patterson: A solid feature of the Mueller report is that it provides a clear explanation of “obstruction of justice.” It has three elements: “an obstructive act,” “a nexus to an official proceeding” (e.g., a grand jury investigation), and “intent.” Then, for each subject of investigation, such as the June 2016 Trump Tower meeting between Russians and Trump campaign staff, the Mueller report applies the three elements to the available evidence. It’s all there in the report, which is why I leave the final judgment to the reader. But you have to read the report if you want to make an informed judgment on the question of whether President Trump obstructed justice.

For more on the Mueller report, see our interview with journalist Garrett Graff, who has written two books about Mueller. And check out our interview with the Wall Street Journal reporters who uncovered secret payoffs that Trump and his associates arranged during the 2016 presidential election campaign.

Too busy to read the Mueller report? Tom Patterson has abridged it for you