Imagine four people sharing an apple pie. In an equal world, the four each get a quarter of the pie. But in America, the rich person at the table – a corporate executive, say – is getting a bigger slice each year, while the others’ pieces are shrinking.

That’s an analogy for how U.S. incomes are changing. Income inequality is a well-documented trend over the last few decades. Indeed, this period saw a massive increase in shares of income to the top 1 percent of earners (those making over $465,626 in adjusted gross income in 2014, according to government figures). Executives, a 2013 paper found, are a major and representative part of the top 1 percent. 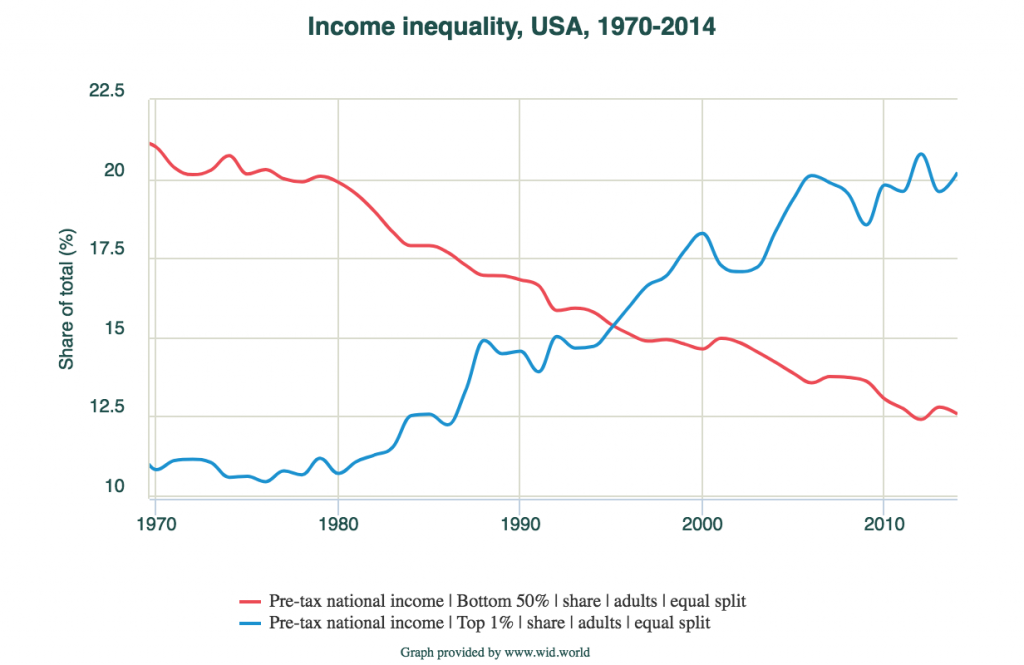 A new paper looks at the role of globalization in this disparity. Most research on globalization focuses on import substitution – whereby American consumers have access to cheap goods made abroad, sometimes hurting American manufacturers. This paper uses exports as a proxy for globalization and notes a correlation between American exports and top executives’ pay. It asks why: Are these executives talented? Lucky? Gaming the system to enrich themselves (a process that social scientists call “rent seeking” or “rent capture”)? Or do exports, by opening up new lucrative markets, simply make top executives so valuable to a firm that their compensation packages rise accordingly?

An academic study worth reading: “Globalization and Executive Compensation,” a working paper from the National Bureau of Economic Research, May 2017.

Study summary: Wolfgang Keller of the University of Colorado at Boulder and William Olney of Williams College compare the salaries of top executives with export data from the Census Bureau. They start with over 3,000 firms and 44,000 executives, but select only companies with at least five top executives. They end up viewing 191 publicly traded firms across 21 years, from 1993 to 2013.

Keller and Olney control for a variety of factors, including technological investment and a firm’s growth rate. Importantly, they also differentiate export growth from exogenous export shocks — a growth in exports not caused by factors attributable to an executive’s skill or a firm’s specialty, like a spike in demand for a specialized product in a particular region. This allows them to determine when increases in executive pay do not simply reflect market returns on their talent.

The World Wealth and Income Database at the Paris School of Economics is managed by some of the top economists researching inequality around the world.

Our 2017 tip sheet on finding trade and tariff data will help you navigate the host of government agencies and multilateral organizations that collate and distribute data on trade volumes, tariffs (import taxes), quotas and subsidies.

The Internal Revenue Service publishes tax statistics, including what it takes to be in the top 1 percent of earners and the top 10 percent, and where the American median income lands each year.

Our free trade literature review found trade with China killed over 2 million American jobs in the 2000s and depressed wages. But globalized supply chains are also creating jobs in the U.S.

This 2016 study in the Quarterly Journal of Economics measures the unequal gains from trade.

This 2013 study in the Journal of Economic Perspectives looks at how and why executive pay rose over the last few decades.