In October 2014 a series of Supreme Court decisions opened the door to a significant expansion of same-sex marriage rights in the United States — more than 30 states now allow same-sex marriage. This legal transformation echoes a shift in national attitudes toward gay marriage, but the extent and nature of the change continues to be debated: Pew Research Center polling has found that support for same-sex unions has grown over time, but varies according to age group, religious affiliation, gender and political ideology. Other research has found that proximity to states that offer increased rights to gays and lesbians can play a role, even as negative attitudes remain very much present.

There is an age-old question about the relationship between popular media and public attitudes: How much do television, movies and the like influence attitudes, and how much is their content merely a reflection of underlying shifts in opinion? The answer is almost always speculative, but a November 2014 study published in the International Journal of Public Opinion Research, “Exposure to the Lives of Lesbians and Gays and the Origin of Young People’s Greater Support for Gay Rights,” provides a rare look at the question through empirical data. Author Jeremiah J. Garretson of Stony Brook University sought to understand why changes in attitudes about gays and lesbians occurred and the extent to which it affected opinions on gay-rights related issues, such as same-sex marriage. Garretson observes that this change seems to have occurred disproportionately among younger Americans, despite the general trend for youth to adopt the attitudes of earlier generations.

Using data from the 1994, 1995, and 1996 American National Election Study panels (ANES), Garretson explores two hypotheses: That increased exposure to gays and lesbians in the 1990s — including through fictional characters on television, film and in literature — has a direct effect on attitudes toward gay men and lesbians, particularly among youth; and that such group attitude shifts in turn impact support for gay-rights policies. He postulates that the 1990s are a significant time period in which to examine these trends: In 1984 and 1988, the ANES showed an average approval rating of lesbians and gays at under 30 percentage points, rising to the high 40s by 2000, where it has essentially remained (the 2012 ANES showed ratings of around 47-48%.) 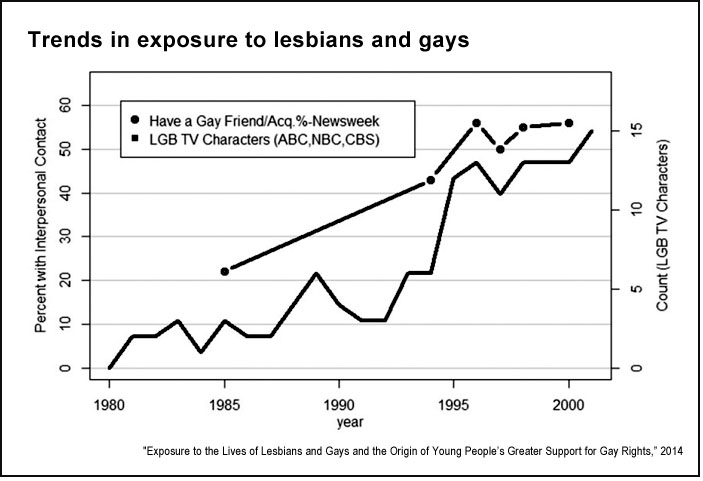 In the study, respondents’ attitudes toward lesbians and gays were graded on a scale of 0 to 100, from cold to warm. These mid-1990s surveys also asked knowledge-based questions about a variety of television and entertainment programming, most notably about the situation comedy Grace Under Fire, which ran on ABC from 1993 to 1998. A gay-related storyline emerged in 1995, when the series was one of the most highly rated in the United States. The study’s author controlled for several factors that could potentially affect support of gay rights, including moral traditionalism, political ideology, religious beliefs and education.

As wider context, Garretson notes: “Gay characters were almost absent on television in 1990, but became relatively common by 2000. Likewise, only one in four people knew lesbians and gays in 1985. By the late 1990s, this had increased to over one in two.” The study’s data supports two hypotheses, he concludes: Exposure to gay and lesbian communities appears to positively impact attitudes among younger generations, and that through these attitude shifts, support for gay rights also increases. “These results suggest a theory as to why we see cohort effects emerge on group-based rights issues — those involving women, racial minorities, and gays and lesbians — but not on attitudes on other issues such as economic or redistributive policy. Researchers looking for the causes of social change may benefit from an increased focus on change in these group-based feelings rather than focusing solely on change in support for specific policies.”

Related research: An October 2014 research roundup, “Same-sex Marriage and Big Research Questions Behind the Debate,” gathers together scholarship on same-sex marriage policies, as well as on the everyday lives of LGBTQ persons in the United States.