The issue: The media plays a well-documented role shaping public opinion and policy preferences. In a democracy, it is generally important that a government have public support before engaging in a foreign ground war.

Today public support is again an issue in nations that are fighting to destroy the terrorist group known as the Islamic State (ISIS), including Canada. Canada has been involved in a number of recent conflicts, including the U.S.-led war in Afghanistan. At least 158 Canadian soldiers died in Afghanistan, according to government statistics, putting Canada’s per capita losses on par with America’s.

An academic study worth reading: “The Impact of News Photos on Support for Military Action,” in Political Communication, October 2016.

Study summary: Stuart Soroka of the University of Michigan and his colleagues design two experiments to test how different types of war photographs impact Canadians’ support for foreign interventions. 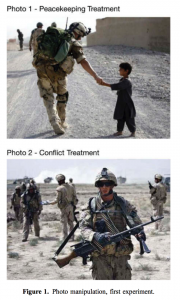 In the first, 767 Canadian adults responded to a question about their support for the Afghanistan war after randomly viewing one of two photos (at left): “The first photo evokes the military as a peacekeeping and development force. The second evokes the military as a war-making force. Importantly, the first photo is not of a non-military actor engaged in peacekeeping. Instead, a soldier is prominent in both photos, allowing us to focus on the effects of different military roles.”

The question was straightforward: “The Canadian military will continue to be involved in Afghanistan for the next several years. Do you support or oppose this?”

Finally, respondents were asked to assess their own “attentiveness to foreign affairs.”

About three years later they carried out a second experiment, which sampled 1,031 Canadian adults. Soroka and his colleagues added new variables, such as a control group that saw no photograph. In this experiment, those who saw photos each saw multiple images from the war against ISIS. Again the photos were of military peacekeeping operations (soldiers seen with no weapons) and of soldiers with weapons. They were then asked about their support for the Afghanistan intervention and the fight against ISIS. As in the first study, respondents were also asked to assess their own “attentiveness to foreign affairs.”

For more on the experiences of war photographers, see this special feature in The Guardian, where photographers discuss making the photographs that almost got them killed.

Earlier studies have shown how the media can impact public attitudes about policy, and that how the media frames policy issues can shape the public’s preferences. Others have shown that a photo illustrating a news story about war can have a slight impact on public support for that war.

David Trilling was a staff writer from 2016 to 2018. He came to Journalist’s Resource from Columbia Business School, where he was a Knight-Bagehot Fellow. David worked for 10 years in the former Soviet Union and Middle East, most recently as The Economist‘s Central Asia correspondent and as an editor at EurasiaNet.org. He has written for Foreign Affairs, Foreign Policy, The Nation, The Guardian and other publications. His photographs have appeared in dozens of periodicals and can be viewed on his website: davidtrilling.com. Twitter: @dtrilling.