In May 2013 the Pew Research Center released a survey that showed the significant gap between the American public’s beliefs about levels of gun violence and the actual trend-lines, which show a considerable reduction in violence over the decades. The report, “Gun Homicide Rate Down 49% Since 1993 Peak; Public Unaware,” notes that “today, 56% of Americans believe gun crime is higher than 20 years ago and only 12% think it is lower.” The report also provides information on how crime has declined in the United States more generally and the various research hypotheses that help explain this.

Part of this public misperception is fueled by prominent mass shootings such as those in Newtown, Conn. and Aurora, Colo., as well as at Columbine High, Virginia Tech and Rep. Gabrielle Giffords’s political event in Tucson. Over the past 30 years, mass shootings events have resulted in the death of 547 people, with 476 other persons injured, according to a March 2013 Congressional Research Service report. The report’s authors identify 78 public mass shootings in the United States between 1983 and March 2013. “While tragic and shocking, public mass shootings account for few of the murders or non-negligent homicides related to firearms that occur annually in the United States,” the report notes. To put these numbers in perspective, more people were killed by firearms in California in a single year than all of the people killed or injured in mass public shootings over three decades nationwide. 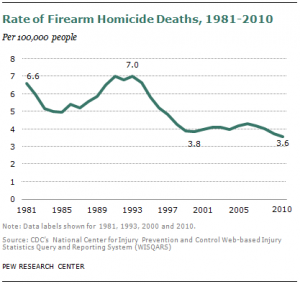 Over the period 1992 to 2011, the violent crime rate for the country continually fell, according to FBI statistics. However, for the first time in decades, the rate of violence appears to have gone up in 2012. The FBI notes that “law enforcement agencies throughout the nation reported an increase of 1.2% in the number of violent crimes brought to their attention for 2012 when compared with figures reported for 2011. The violent crime category includes murder, forcible rape, robbery and aggravated assault.”

Of particular concern is the rate of violent crime among young people — particularly minority youth — in America. In July 2013, the Centers for Disease Control and Prevention (CDC) issued a report, “Homicide Rates Among Persons Aged 10–24 Years — United States, 1981–2010,”  assessing long-terms trends among these demographic groups. The CDC states that “homicide disproportionately affects persons aged 10-24 years in the United States and consistently ranks in the top three leading causes of death in this age group, resulting in approximately 4,800 deaths and an estimated $9 billion in lost productivity and medical costs in 2010.”

Key findings in that report include:

The following CDC chart illustrates trends among youth, broken down by racial group: 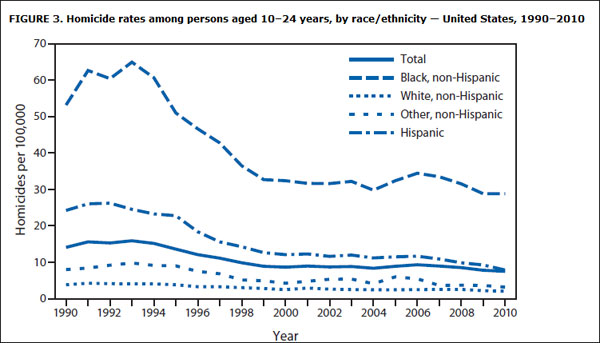 Related research: For a sense of what the research says about media violence, particularly that portrayed in video games, and its connection with real-world violence, see this review of relevant studies.