The relationship between terrorism and economic growth: Research

by Martin Maximino and Denise-Marie Ordway, The Journalist's Resource
November 20, 2015

The estimated number of deaths from terrorism worldwide rose from 3,329 in 2000 to 32,685 in 2014, according to a November 2015 analysis by the Institute for Economics and Peace. The vast majority of lives lost to terrorism in 2014 — 78 percent — took place in the five countries where most terrorism activity occurred: Iraq, Nigeria, Afghanistan, Pakistan, Syria. More than half of incidents claimed were attributed to Boko Haram and the Islamic State (ISIS or ISIL). However, 93 countries experienced at least one terrorist event in 2014, including France, Australia and Austria.

Commentators have frequently speculated about the nature and characteristics of terrorism, including the role of technology and social media in perpetrating terrorist acts. Since the 9/11 attacks, there has been a great deal of discussion about the root causes of terrorist violence, but fewer rigorous empirical assessments have been attempted.

In terms of the link between economic growth and terrorism, the existing evidence is inconclusive: Some authors claim there is a positive link; others suggest there is an inverse association; and some have found no statistically significant relationship. Some of the latest evidence in this debate comes from a 2015 study published in Oxford Economic Papers, “Economic Growth and Terrorism: Domestic, International and Suicide,” which is based on a cross-national, time-series data analysis of 127 countries for 1970-2007. The information for economic growth, as annual percentage growth in GDP per capita in 2005, was obtained from the World Bank’s World Development Indicator 2013. Data measuring terrorism violence is from the Global Terrorism Database (GTD). The author, Seung-Whan Choi of the University of Illinois, Chicago, also controls for a number of variables, such as income inequality, democracy, state failure, population and a variable designating Post-Cold War conditions. 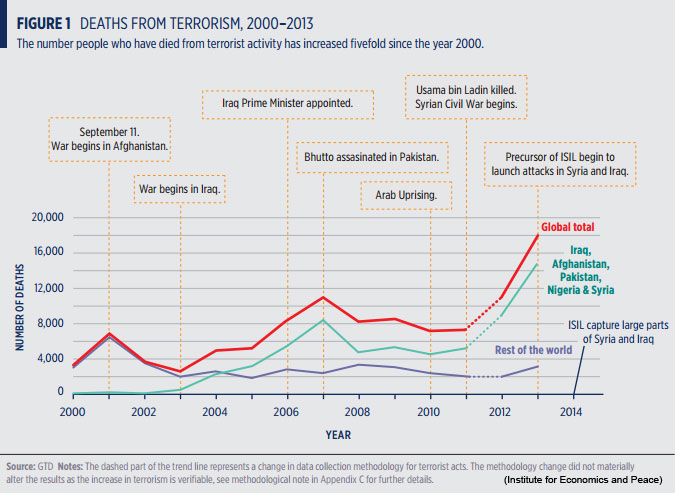 This study provides new and interesting insights for two reasons. First, the author introduces a distinction between agricultural and industrial economic growth, as opposed to a single economic output indicator. Choi notes that “only some forms of economic growth are associated with terrorist activity, and even then, they only correlate with particular forms of terrorist attacks.” Second, the study measures the impact of economic growth on three expressions of terrorism, as opposed to a single, homogeneous indicator of terrorist violence. Importantly, previous studies focus on one modality of terrorism, “under the implicit assumption that terrorist groups will use the same conventional attack tactics despite the continuously enhanced security environment.” The author distinguishes between international terrorism — involving at least two different nationals — domestic terrorism — wherein the victims and perpetrators are from the venue country — and suicide attacks, when a terrorist purposefully dies in the process of carrying out his or her mission.

The study has a number of policy implications, the author notes: “Overall, the results of this study demonstrate that economic growth is not a cure-all solution for terrorism because in some instances it may breed more terrorism. Nevertheless, healthy economic conditions are certainly beneficial to the war on terrorism because the majority of suicide attacks occur in only a few countries.”

Related research: The 2015 report from the Institute for Economics and Peace suggests that, because there are high levels of internal conflict in many of the countries where terrorism is concentrated, it is tough to separate the impact of terrorism on economies from the economic effects of the conflict. A 2014 report from the Institute for Economics and Peace found that “there is no systematic link to poverty measures, nor to several broader economic development factors such as the Human Development Index or its sub-components such as mean years of schooling, or life expectancy.” Similarly economic indicators such as year to year GDP growth do not correlate.” Further, a 2013 study published in Journal of Peace Research, “Causality between Terrorism and Economic Growth,” examines how terrorism can affect economic growth. The study finds, among other things, that “for the post–Cold War era, terrorism is found to be detrimental to growth for African and Islamic countries with low levels of political openness, high levels of political instability, and strong terrorist activity.”

She joined The Journalist’s Resource in 2015 after working as a reporter for newspapers and radio stations in the U.S. and Central America, including the Orlando Sentinel and Philadelphia Inquirer. Her work also has appeared in publications such as USA TODAY, the New York Times, Chicago Tribune and Washington Post. She has received a multitude of national, regional and state-level journalism awards and was named as a Pulitzer Prize finalist in 2013 for an investigative series she led that focused on hazing and other problems at Florida A&M University. Ordway was a 2014-15 Fellow of Harvard’s Nieman Foundation for Journalism. She also serves on the board of directors of the Education Writers Association. @DeniseOrdway