Political polarization is often thought of as a relatively recent phenomenon in the United States — the Tea Party came to prominence in the late-2000s, after all — but research has shown that it has much deeper roots. A 2006 study in the Journal of Politics found that ideological divisions had been on the rise since the 1970s: “These divisions are not confined to a small minority of activists — they involve a large segment of the public and the deepest divisions are found among the most interested, informed and active citizens.”

A Princeton University study published the same year found a connection between polarization and inequality: The higher a state’s level of income inequality, the more partisan its congressional voting patterns were — Republicans shifted farther right, while Democrats moved to the left. A 2012 Pew Research study showed that the pattern had continued, with political polarization rising significantly during the second term of President George W. Bush and continuing through President Obama’s two terms. A substantial body of research has also shown that polarization isn’t restricted to politics, and can influence everything from where people live to whom they date.

A June 2014 report by the Pew Research Center, “Political Polarization in the American Public,” uses data from a national survey of 10,013 adults to explore how political polarization affects government, society and people’s personal lives. Its key findings include: 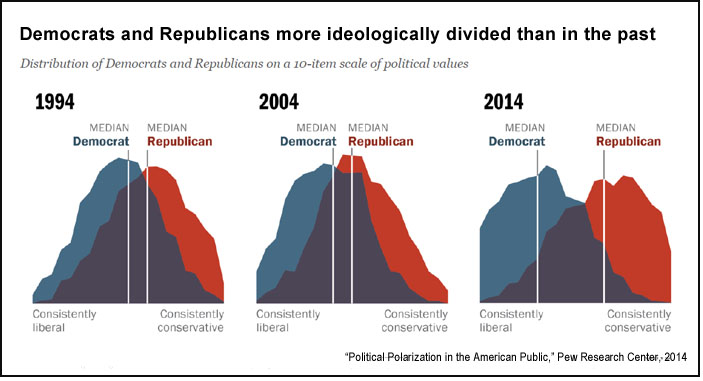 The authors conclude that “because political participation and activism are so much higher among the more ideologically polarized elements of the population, these voices are over-represented in the political process.” Nevertheless they remain a minority of voters, donors or campaign activists. “While the left and the right may speak louder in the political process, they do not necessarily drown out other elements of the public entirely. And this may be one reason why, even in lower-turnout primaries, the more ideological candidates do not always carry the day.”

Political polarization in the American public