The justice cascade: Origins and effectiveness of prosecutions of human rights violations

In a 2014 report, the U.S. State Department reveals dire human-rights abuses in nations around the globe, from Egypt to Russia, Syria to Cuba, China to South Sudan. Research has demonstrated the importance of membership of international organizations to prevent future violations and promoting human rights norms, and the role of a free press. However, debate continues about whether the most direct way of holding human rights abusers accountable — putting them on trial — has a deterrent effect, or if it can prolong conflicts and even lead to more abuses.

The concept of holding individuals criminally accountable for human rights violations first emerged with the Nuremberg and Tokyo trials after World War II. Prosecution efforts continued on a domestic level in Greece and Portugal in the 1970s and Latin America in the 1980s, and in the 1990s international criminal tribunals were established for the former Yugoslavia and Rwanda. The creation of a permanent International Criminal Court in 2002 put the spotlight on prosecuting human rights abusers, but several controversial cases have led to questions about the effectiveness of the ICC.

The fragmented nature of human rights prosecutions has made it difficult to understand the scale of the move toward holding individuals accountable. A 2013 paper published in the Annual Review of Law and Social Science, “The Justice Cascade: The Origins and Effectiveness of Prosecutions of Human Rights Violations,” uses new data to present a cross-national view of trends in human rights prosecutions. The authors — Kathryn Sikkink, now of the Harvard Kennedy School, and Hun Joon Kim of Griffith University, Australia — trace the origins of individual criminal accountability, the process by which this new norm has spread globally, and its impact on repression levels in those countries and regions where prosecutions have taken place. 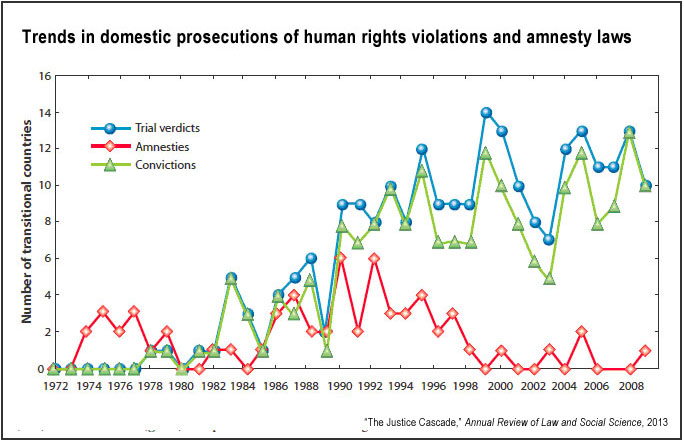 The authors conclude that while prosecutions “are not a panacea for human rights problems; they appear to be one form of sanction that can contribute to the institutional and political changes necessary to limit repression.” The paper closes with a brief discussion of research that has shown prosecutions may be more effective when combined with amnesties. One explanation offered is that amnesties stop perpetrators from forming a united front by splitting them between those who would benefit from an amnesty and those who would not.