The push for open government and open data by federal officials, as well as authorities across many states and cities, can seem an unmitigated good. Talk to journalists, however, and there are myriad areas where they believe government at all levels is still being less than transparent — and less than helpful in revealing facts that the public is entitled to know.

Scholars who study transparency initiatives point out the ambiguities inherent in many transparency projects, the modest real outcomes in most cases, and even the potential downsides of “naked government” or the possibility of using the banner of transparency to whitewash or conceal. For example, the Obama administration has said it has a “lot to brag about” in terms of responding to Freedom of Information Act (FOIA) requests, and in 2014 alone it “processed 647,142 FOIA requests, and over 91% of those requests resulted in the release of either some or all of the requested records,” according to press secretary Josh Earnest. However, the Associated Press did its own analysis and concluded that the Obama administration set a “new record” for denying records in 2014. (This debate comes as the federal government continues to field more and more requests from citizens and firms of all kinds, in addition to journalists.)

Meanwhile, open-data initiatives such as Data.gov have been criticized by journalists for the perceived lack of useful datasets, even if businesses have leveraged some of the data streams. And at all levels, it is unclear if merely releasing datasets meaningfully contributes to public knowledge or understanding. Part of the cognitive dissonance might be explained by the fact that even the original “open data” agencies, such as the federal government’s principal statistical agencies (the Census Bureau, for example), have struggled to keep up with the pace of Web innovation, from user-centric design and interactive applications to search and mobile optimization.

Finally, it is also worth noting that recent research has found that members of the public often demonstrate an unconscious (and negative) bias in their evaluations of public sector performance, irrespective of the underlying reality or truth.

A 2015 report from the Pew Research Center, “Americans’ Views on Open Government Data,” by John B. Horrigan and Lee Rainie, is based on the first national survey testing how these government openness projects, and the wider movement around them, is filtering down into public consciousness. Pew Research polled some 3,200 persons in late 2014 through Web surveys and mail. The margin of sampling error is plus or minus 2.3 percentage points. 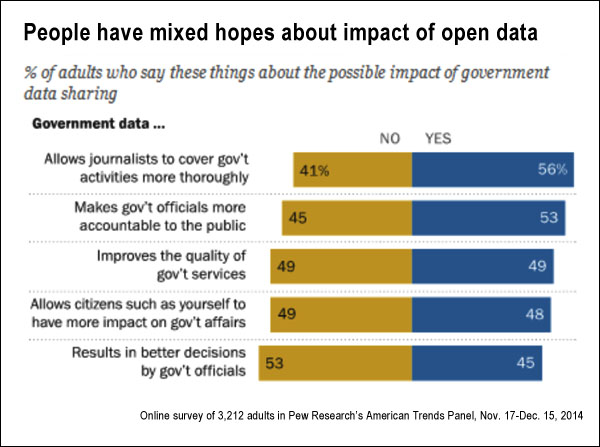 “The survey unearthed relatively high levels of broad and simple engagement with government data as people use the Internet to access government services and information,” the authors conclude. “At the same time, the survey shows relatively low levels of public awareness of government initiatives to open the data vaults for the public and entrepreneurs. There is optimism among many citizens that government data can improve government accountability (against some caution that open data can improve government performance), along with some level of concern about government sharing data that may hit too close to home.”