The problem of homelessness is a particularly difficult one for researchers to understand and journalists to cover. As a 2013 study in the American Journal of Public Health indicates, even those who have deep knowledge in this area and work directly with the homeless often have difficulty assessing patterns and needs.

In addition, the problem’s deep and sometimes hidden causes, the diversity of stories of those affected, and the often-invisible nature of life on the streets complicate attempts to quantify the true size and nature of the homeless population. For a sense of the state of current scholarship, see “The New Homelessness Revisited,” published in the Annual Review of Sociology. That paper identifies the broad areas of agreement among scholars and outstanding research questions.

To better assess the state of the problem in the United States, in 2007 the federal government began providing a yearly snapshot of the homeless population in states across the country. While the national census highlights general trends, researchers point out that the very nature of question — “How many people are homeless?” — is both misleading and nearly impossible to answer in any precise way, as witnessed by the varying estimates and methodologies. In 2010 the federal government found that 1.6 million people experienced homelessness at some point and were sheltered. A major 1999 report produced by the federal government, the Urban Institute and leading researchers estimated that there were 2.3 million people who experienced homelessness over a given year. While that figure is still cited, the National Coalition for the Homeless tried to compensate for under-counting and put the figure at approximately 3.5 million.

The U.S. Department of Housing and Urban Development’s 2013 “Annual Homeless Assessment Report” furnishes data on both the sheltered and unsheltered population according to the results of a survey done on a single night in January — this is called “point in time” counting, and is generally acknowledged to be the most accurate way to establish valid trend data. (Again, it is not a projection on an annual basis.) For the first time, communities reported the ages of those affected. The report defines “chronic homelessness” as cases where a disability of some kind is involved and the individual or family has “either been continuously homeless for one year or more or has experienced at least four episodes of homelessness in the last three years.” 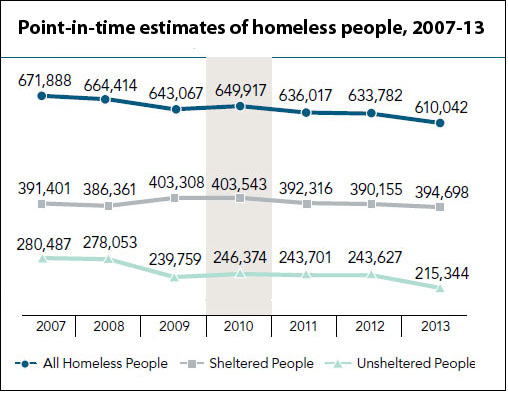 Statistical reports are also available for individual states detailing their homeless populations and the types of persons affected. 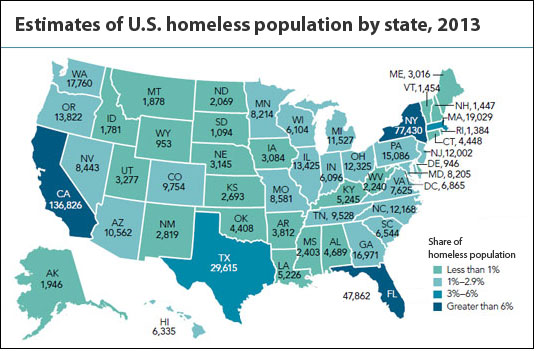 Related research: A 2013 study, “The Age Structure of Contemporary Homelessness: Evidence and Implications for Public Policy,” uses a longitudinal sample from New York City to assess broad trends in the demographics of this population. Another study, published in the American Journal of Public Health, “Characteristics of Emergency Department Visits by Older Versus Younger Homeless Adults in the United States,” looks at the differences between age cohorts in terms of medical needs (also see a 2013 study on the nature of injuries presented). Finally, although health care reform opens new opportunities for homeless persons, there remain significant logistical hurdles to extending Medicaid to this population.

Homelessness in the United States: Trends and demographics