The dynamics of immigration opinion in the United States, 1992-2012

The United States is known as a nation of immigrants, but throughout its history the country has been particular about who is allowed to enter. Immigration reform continues to be a thorny topic for citizens and policy experts — and especially Congress. Many believe that for reform, timing is everything. Understanding the patterns of both migration and public sentiment over time remain crucial.

According to recent Census data, approximately 40,378,000 American citizens were born outside the country. The Department of Homeland Security estimates that as of January 2011 about 13.1 million legal immigrants and 11.5 million unauthorized immigrants resided in the United States (the total U.S. population is estimated to be almost 325 million).

Net migration from Mexico was nearly zero — or even represented a net loss — according to a 2012 metastudy from the Pew Hispanic Research Center, while groups from other parts of the Americas are growing. After six years of decline in the numbers of non-Mexicans detained at the U.S. southern border, the rate doubled in 2012 (though it still remains far below its 2005 peak). New reports have focused on the extraordinary nature of many of these migrants’ journeys, notwithstanding legal and policy issues.

For more analysis on the data behind diverse immigration trends, see National Journal‘s “The Next America” project, which spotlights issues such as how metropolitan demographics are changing and how population shifts are shaping the political agenda. 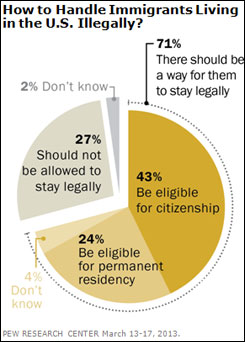 In the wake of the April 2013 Boston Marathon attack, some called for heightened security checks and a national citizen identity verification system. A March 2013 survey from Pew Research found that 43% of Americans supported a way for illegal immigrants to become citizens, 24% supported allowing illegal immigrants to become permanent residents, and 27% felt they should not be allowed to stay in the country. The survey also showed that over time, immigrants (both legal and unauthorized) have been viewed more positively over time: 49% of Americans believe that immigrants “strengthen the U.S. with their hard work and talents,” while 41% believe immigrants create “a burden because they take jobs and health care” resources.

A second April 2013 poll, from Gallup, showed similar support for pathways to citizenship or residency for illegal immigrants but an even split over a proposed visa program that would allow a specific number of immigrants to work at “lesser skilled jobs.”

“The effect of events does not neatly fit conventional wisdom,” the author concludes. “Economic problems in 1991-92, 2001, and 2008-10 did not increase opposition to immigration, but in the wake of rancorous debates over immigration policy in 1994-96 and 2006-07, and the events of 9/11, opinion on some issues became more negative.”