David Karpf studies an emerging and increasingly important field in the media world: online activism. His new book, The MoveOn Effect: The Unexpected Transformation of American Political Advocacy, provides an analytical look at the changing patterns of how interest groups operate. Karpf, formerly of Rutgers and this fall an assistant professor of political communication at the George Washington University School of Media and Public Affairs, has also written a series of papers about a wide range of new media topics.

As part of our ongoing research chat series, Journalist’s Resource caught up with him at the 2012 Personal Democracy Forum to ask for some insights about trends in the online organizing world — and for some advice for those covering new media and politics. The following is an edited transcript:

Journalist’s Resource: What are the things that the media assume about online organizing that they typically don’t quite get right?

David Karpf: They tend to think of online activism as a competitor or alternative to offline activism. What we find that technology has done is that it has changed the inputs. What was usually done in a traditional campaign is pass around a petition that people sign; now the first step in a campaign is a digital petition that people sign. Real strategic campaigns have always had many steps, and those steps have relied on the communications technologies available at that time. All of this remains the same, but the pathways have changed. So when you have online petitions, for example, that means you can both spread them differently and then do different things with the list you generate. But in a lot of important ways, campaigning is still campaigning.

JR: What are some of the research-driven insights in your book that people should know about?

David Karpf: Probably the biggest one is what I would call the “disruption thesis.” A lot of what I’m discussing in my book when I’m looking at MoveOn.org or Daily Kos — all of this new generation of organizations — is very similar to what Bruce Bimber found in his 2003 book Information and American Democracy. Bruce was saying that when you radically change the technological medium, that creates opportunity for innovation. He talked about post-bureaucratic organizations. So I’m coming along nine years later and looking at what those organizations have turned out to be. It’s very much in line with what he was then suggesting. But what really wasn’t clear when he was researching for that book was that there’s a generation gap among organizations. It’s not the Environmental Defense Fund and the Sierra Clubs and the ACLU that are leading in terms of innovation. There’s a real difference in how a MoveOn.org or a Daily Kos uses email, blogs, Twitter and all of these social media, compared to how the older activist groups do. This is what I call the “MoveOn” effect — this isn’t about the effectiveness of MoveOn, per se — it’s about changes in how we define members and how we raise money from members. 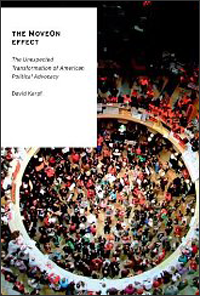 For the past 40 years of so, the big organizations in America were defining members by who wrote an annual check; that was “arm-chair activism.” That replaced the even-older notion of membership, which was membership by showing up at meetings and doing something and becoming the group’s secretary.

Today, we’ve experienced another membership regime change. An organization’s membership is just being on their list. If you talk to groups around the country, you can ask, “Are you on MoveOn’s list?” and some hands will go up. But then you ask, “Are you a member of MoveOn?” and most of those hands will go down. This is because they’re unaware that they’re already a member in MoveOn’s eyes. That redefinition of membership — once you’ve defined it in such a thin manner, and relied completely on technology — you can test the will of the “membership” in ways that the old organizations can’t. This is what I call passive democratic feedback.

JR: What distinctive mechanisms or tactics do the new online movements employ?

David Karpf: MoveOn and other groups do what’s called “A/B” testing every day. They send out various testing emails to see what issues are most popular with the membership; on a day-to-day basis they are actually able to see what the membership is willing to do and support. Journalistic organizations, by the way, have been doing this a lot, and that’s the reason why we get more and more extreme headlines on Politico and Huffington Post. In the newspaper space, that concerns me, because I want headlines to be accurate. But in the advocacy space I actually think that’s a really good thing. It does gauge the will of the membership (though it can also lead to some more polarization through participation.) In any case, traditional organizations that still rely on direct mail have no such ability to test their membership.

The other thing this does — and this is where the real disruption comes in — is that direct mail as a funding stream is declining. The older organizations have taken their old direct mail appeals and put them online. What MoveOn and other organizations are doing instead is sending out messages based on the politics of the moment, saying, “Here’s a commercial we’re going to put on the air, and if you like it and support this issue, give us 10 bucks.” That targeted email fundraising is great if you have really low infrastructure costs and you just want to contribute to their action of the day. MoveOn has 30, maybe 40 staff, and zero offices. Other similar organizations have staffs in the dozens and, again, very little office space. For the older organizations that have human resources departments and what not, this creates a real problem. The new fundraising is great if you’re working on the issue of the day, but it’s not so great if you have really high overhead costs that you need to pay for with the slushy funds that used to come from direct mail.

This is a disruptive moment, where the new groups are not only operating differently than the old groups, but the old groups are facing a scenario similar to what the newspapers have faced for the last few years. Which is that it’s not blogs that undermined the newspapers, but their revenue streams were undermined. Similarly, the old non-profits that built up their infrastructure in the direct mail era face the question of how they pay for it. This all will reshape what civil society and the advocacy sector will look like. The advocacy system is maybe three to five years behind the newspaper system in having to work this out, and this is a moment in the advocacy world where people are thinking about what it’s all going to look like — what will be provided for, and what will be underprovided for — as we start defining membership in new ways and raising money in new ways.

JR: When the next “Kony 2012” campaign is rolled out — the next new, big online activism splash — what should journalists and bloggers be asking?

David Karpf: The questions that I’d like to see them ask the most about are in regard to the campaign’s next steps — and in regard to power. In particular, the smartest takes I saw on Kony were about studying the network diffusion. They looked at how the campaign got celebrities, with massive audiences, to re-tweet them. So the Kony effect was the Justin Bieber effect. Some journalists did a pretty good job with that.

But the area where they didn’t do as good a job was in asking, “Well, if the goal is to capture Joseph Kony, what are the next steps in the campaign?” After the campaign went viral, the next step was to put up posters all around your city, and that way Kony will be brought to justice. Honestly, that was something that deserved criticism. That was not what we call in the campaign world a strategic vehicle. We haven’t caught Kony yet. And there weren’t a ton of folks on college campuses for their second action. 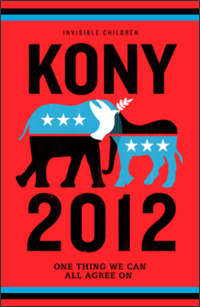 So the way we ostensibly judge any campaign … is to look at vanity metrics versus actionable metrics. When you’re looking at any campaign, you want to ask, “What are the actionable metrics? Who are the decision makers who can give us what we want, and what actions are going to convince them to go and give it to us?” The next time we see a campaign like Kony 2012 or the Komen Foundation-related campaign — which is arguably a more important success than Kony — I think the best journalism will be that which looks into those hard questions and see how the campaigners behind it are answering these questions.

JR: So you’re helping to define a new area of academic study. Who are your peers in this endeavor of mapping out this space from a research perspective?

David Karpf: I’ll mention Bruce Bimber again, who has new book out with Cynthia Stohl and Andrew Flanagin. It’s called Collective Action in Organizations. That’s a very good book. Others I’d mention are Rasmus Kleis Nielsen, who is at Oxford University; Daniel Kreiss, at the University of North Carolina, Chapel Hill, who has a new book about the Obama new media team; and Chris W. Anderson, at CUNY.

JR: For those interested in gaining a deeper knowledge of online activism and digital politics, which academic journals should they follow?

David Karpf: I would say Information, Communication and Society, New Media and Society, Journal of Information Technology and Politics, Political Communication, and there’s an online journal called Policy and Internet. Those are the journals that I find myself reading, and the people I read the most tend to submit their papers to. There’s also an online journal called First Monday, which can be very good. All of those represent the spaces where this emerging group of scholars is putting their work.

JR: What about scholarly blogs? Which ones are useful for learning about what this community is studying?

David Karpf: I blog at a site called “Shouting Loudly,” which if anyone decides to visit it, they will get to hang out with me personally, as it doesn’t get a lot of traffic. There’s a site called “Culture Digitally,” which my colleague Daniel Kreiss and other scholars post at. In political science, there’s “The Monkey Cage.” They don’t do a lot on Internet research, but it’s a very, very good blog. A lot of the scholars are putting things on their own websites. If you go to one of them, it’s pretty easy to trace out who they’re talking to.