The value of editing in the digital age: Readers’ perceptions of article quality and professionalism

The two signature characteristics of digital media are speed and compression: Make it fast and keep it short. This goes for everything from Twitter all the way up to long-form journalism, which has withered at traditional news outlets as market pressures have increased, resources have declined and deadlines have multiplied. “Cut that story!” as political journalist Michael Kinsey wrote in the Atlantic in 2010, and news organizations have — along with many journalists who once wrote and edited them.

According to the American Society of Newspaper Editors, between 2001 and 2014, the number of full-time professionals in U.S. newsrooms fell from 56,400 to 36,700, a drop of 35%. Layoffs have been everywhere, from support staff to management, but particular pressure has fallen on copyeditors (also known as sub-editors), charged with closely reading stories before publication — flagging potential legal issues and unclear phrasing; checking spelling, grammar and facts; eliminating redundancies and smoothing text; and writing headlines, captions and more. With advertising revenues falling 45% between 2006 and 2012, the perceived value of such “unseen” work has fallen, and the title of a 2009 study in the Newspaper Research Journal says it all: “Copy Editing Not Great Priority for Online Stories.”

The results have been predictable and, for most media professionals, depressing. The attitudes of the general public have been less clear: Standards have shifted as mobile devices have increased in importance, yet even on Twitter, a highly space- and time-constrained medium, concern over grammatical and spelling errors crops up regularly. Technology has certainly advanced, but can only help so much, as a 2015 “After Deadline” column in the New York Times makes clear.

A 2014 study in Digital Journalism, “Audience Perceptions of Editing Quality, Assessing Traditional News Routines in the Digital Age,” examines the potential role of story editing in readers’ perceptions of the news quality and value. The author, Fred Vultee of Wayne State University, selected a diverse cohort of 119 university students: More than 57% reported that the Internet was their primary source for news, with television second (23.5%), and their political views ranged from conservative to liberal. The experiment itself was based on a set of stories reflecting a “post-now, edit-later philosophy.” Eight articles that had not yet been corrected were identified, reduced to a consistent length and edited. Participants read all eight articles in a randomized mixture of pre- and post-edited forms, and rated them on their professionalism, organization, writing and value. 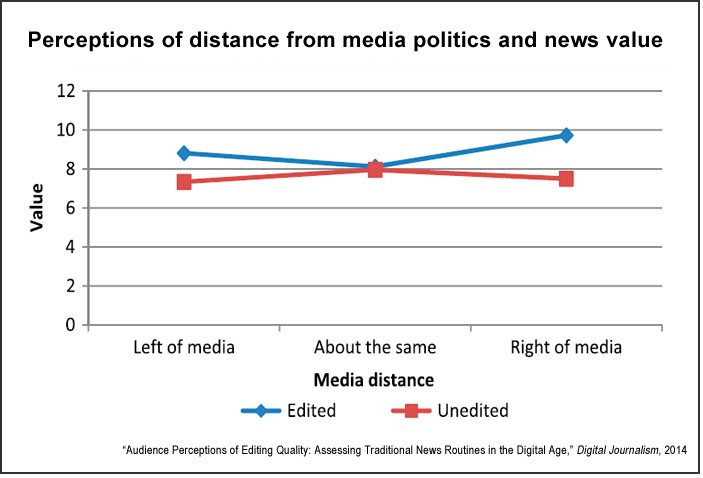 “Newsroom managers who shift time and money from editing or photography to reporting and writing are making economically rational decisions; they are not pledging allegiance to the dangling modifier as much as trying to figure out what resources will do the most good and where,” Vultee writes. “By looking in detail at the demographics and media habits associated with different perceptions of news processing, journalists and people who value journalism can understand more about how a real-world audience values those parts of the production line that do not produce unique content.”

Related research: The American Press Institute has a thoughtful write-up of the copyediting study and its implications for the media business, written by Talia Stroud of the University of Texas at Austin. A Pew Research Center report, “State of the News Media 2014,” is the organization’s latest update on the U.S. journalism landscape. It finds some reason for optimism, but also continued concern: “Our first-ever accounting found roughly 5,000 full-time professional jobs at nearly 500 digital news outlets, most of which were created in the past half dozen years,” the report notes, but also finds that “new money flowing into the industry may be more about fostering new ways of reporting and reaching audience than about building a new, sustainable revenue structure.”

Skills-based material: Journalist’s Resource offers a series of posts intended to help journalists improve the quality of their writing. “Copyediting for Reporters: How to Get the Basics Right” offers tips and resources for cleaning up your copy; “Style Overview: Understanding the Differences between AP and Chicago Style” highlights the distinctions between the two leading style guides; “Math Basics for Journalists: Working with Averages and Percentages” can help you better understand two mathematical concepts frequently used in news stories; and “Statistical Terms Used in Research Studies; a Primer for Media” gives an overview of key concepts used in academic research.