Two-time Pulitzer Prize-winner Steve Coll is a staff writer for the New Yorker and an author of a series of books that explore closed institutions and groups — from the CIA to Al Qaeda and beyond. His latest, Private Empire: ExxonMobil and American Power, provides a new window into the global oil industry and looks at issues of sovereignty in a world of mega-companies. A former managing editor at the Washington Post, Coll has been longtime head of the New America Foundation, a Washington-based think tank where a hybrid group of high-level journalists and academics examines public policy issues across a wide range of subjects — from economics and technology to energy and health.

(Update: Coll is now off to write a follow-up book to his Pulitzer Prize-winning Ghost Wars; he has also been named the new dean of Columbia Journalism School.)

As part of our ongoing research chat series, Journalist’s Resource asked him for some insights into the research world and its relationship with journalism. The following is an edited transcript:

Journalist’s Resource: How does New America bridge the research and journalistic worlds?

Steve Coll: We’re a hybrid organization, and we don’t have a specific strategy in exactly the way you ask about. We house both academics and journalists, and we have a particular interest in speaking about the changing landscape of journalism. We don’t think about ourselves as specifically as a research organization that is trying to serve journalists in the way that, say, the Shorenstein Center does. But we do try to be a leader of open debate about the future of serious journalism and how to construct it. We think that there are quality institutions in Washington that can create a safe environment for free debate about these kinds of questions — whether they involve institutions like the Public Broadcasting Corporation, or whether they involve the fact-checking movement or the future of journalism schools and how they should think about their role now. So that’s how we define ourselves. 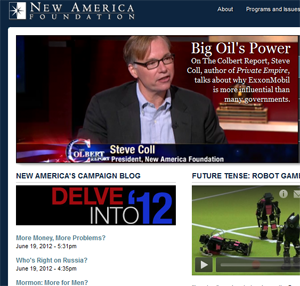 Steve Coll: Yes, I think there are intersections and certain mergers going on. I see it elsewhere, at The New Yorker and other institutions. These institutions are trying to define themselves a little closer to the academy. And also in the academy, scholars are trying to be heard in a landscape where, if you’re not heard, it’s kind of hard to make a change just through your students and colleagues.

I know it’s always been a tension for scholarship whether their work is relevant. But these days there are more scholars who are willing to step out of the cloister and join with journalists in bringing more ideas and research that are relevant to public problems. It’s obviously not everywhere that this is happening. But in my experience, I see a lot of it happening, in a way that would not have been true in the days with the Los Angeles Times, the Washington Post and the Miami Herald — and everybody else — had big, robust newsrooms, full of self-confident journalists who had resources. I think there was more distance in those days between the methods of scholarship and the methods of journalists.

JR: In your own work, do you begin by doing what academics would call a “literature review” — looking through the relevant prior research?

Steve Coll: I do. Sometimes it’s easier than others. It depends on how much I know about the subject going in and how narrow the scope of the piece is. It’s helpful in two ways: One is to understand what serious people have thought about subjects, and what I might need to read myself, and then to understand what I would need to do to deliver something original and useful. I want to understand the best work that has been done in an area. And related to this, I suppose, is just marking out the boundaries, and thinking about what it is that I can do as a reporter to deliver something that the very best scholars in a field might recognize as new in some ways. I don’t know what being an assistant professor is like, but I can imagine rerouting as an academic that that’s kind what you have to do in scholarship: you have to mark out where the borders lie and as a practical matter go beyond them.

JR: For Private Empire, was there anything in the research literature that you found particularly helpful? 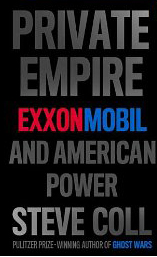 Steve Coll: Yes, quite a lot actually. It’s different than a book project dealing with South Asia, where I get steadily get a lot of academic work — not all of it, but much — and read it in real time as it comes out. So I’m pretty well mapped in that area. In comparison, Private Empire was a little bit more of an open landscape for me, and it was also a book that evolved. I didn’t even choose ExxonMobil as a framing subject until I was six or eight months into the book process and decided to focus on a single company.

To answer the question, I would say that for the book I had to travel in West Africa and had to try to define a body of work relating to places like Chad and Nigeria.… In addition to doing what journalists do — in terms of being able to meet people and Freedom of Information Act requests and that sort of thing — I would say that I benefited enormously from some of the best academic literature on those countries, in subjects such as political economy. Nigeria had the richest body of work, Chad was pretty neglected and Equatorial Guinea was pretty neglected. But there was a lot that was helpful.

JR: For young journalists who want to engage with this kind of material for projects and stories, do you have any specific advice?

Steve Coll: I think that on the academic side there are various kinds of shortcuts to figure out how to read efficiently on a subject. I don’t think there any Google-like search engines that allow journalists to do efficient reading, because those search engines that are most useful for academics are most useful for scholarship and not for journalists. So you have to do that ping-pong thing: You have to talk to people and ask about what to read, then read, and then go back and talk with more people. You have to go back and forth.

The only thing I would add is that, from the time I was first trained as an investigative beat reporter in my 20s until today, I continued to be amazed at how much opportunity there is in court records, in legal records, that goes unexploited by American journalists. There is so much rich data. It’s getting easier and easier to use and find online filings, but it takes figuring out a way to get trained, and it takes practice and maybe a few months of dedicated mentorship to really get up to speed. That to me has returned so many [good stories] over the years…. There’s nothing like court transcripts to reveal subjects, and it’s so much fun. The moments that arise are like none other in reporting. You sometimes just stumble onto things that no one has looked at that are incredibly revelatory and are right there in the court documents.

Research chat: Steve Coll of the New Yorker and the New America Foundation