Journalist’s Resource aims to bridge the gap between the media and scholarly worlds. We come at the problem from the media end of things. But our friends at the London School of Economics and Political Science’s “Impact of Social Sciences” blog are encouraging more scholars themselves to engage directly in the wider communications space.

Of course, U.S. scholars have followed this path in increasingly larger numbers; the political scientists at The Monkey Cage, for example, are a prime example of this scholar-blogger paradigm. Other such examples include The Conversation site, based in Australia, and the “Power and Policy” blog at our own academic home, the Harvard Kennedy School.

With LSE’s permission, we’re excerpting from and re-posting some thoughts from LSE political scientist Patrick Dunleavy and Chris Gilson, editor of LSE’s European Politics and Policy blog (EUROPP). You can read their full conversation here. The following is an edited transcript of their joint responses:

Many academics are still skeptical about the value of blogging. What is it that gives you so much confidence in academic blogging as a means of dissemination and engagement?

One of the recurring themes (from many different contributors) on the Impact of Social Sciences blog is that a new paradigm of research communications has grown up — one that de-emphasizes the traditional journals route, and re-prioritizes faster, real-time academic communication in which blogs play a critical intermediate role. They link to research reports and articles on the one hand, and they are linked to from Twitter, Facebook and Google+ news-streams and communities.  So in research terms blogging is quite simply, one of the most important things that an academic should be doing right now.

But in addition, social scientists have an obligation to society to contribute their observations to the wider world — and at the moment that’s often being done in ramshackle and impoverished ways, in pointlessly obscure or charged-for forums, in language where you need to look up every second word in Wikipedia, with acres of “dead-on-arrival” data in unreadable tables, and all delivered over bizarrely long-winded timescales. So the public pay for all our research, and then we shunt back to them a few press releases and a lot of out-of-date academic junk.

Blogging (supported by academic tweeting) helps academics break out of all these loops. It’s quick to do in real time. It taps academic expertise when it’s relevant, and so lets academics look forward and speculate in evidence-based ways. It communicates bottom-line results and “take aways” in clear language, yet with due regard to methods issues and quality of evidence. In multi-author blogs like this one, and all our blogs, it helps create multi-disciplinary understanding and joining-up of previously siloed knowledge. (Twitter is a huge supplementary help, in forcing academics to communicate key messages in 140 characters!)

Academic blogging gets your work and research out to a potentially massive audience at very, very low cost and relative amount of effort. With platforms like WordPress (which we use here), you can set up a blog and have your first article online in no more than 10 minutes. Recent research from the World Bank has shown that blogging about an academic article can lead to hundreds of new readers when before there were only a handful. Blogging in multi-author blogs is a great way to build knowledge of your work, to grow readership of useful articles and research reports, to build up citations, and to foster debate across academia, government, civil society and the public in general.

You can see that your longest established blog, British Politics and Policy, is being read across the media, the civil service, Parliament and government in the UK. Did you foresee this impact when you started it as an election blog in 2010. Why do you think that blog in particular, has been so successful at penetrating these professions? 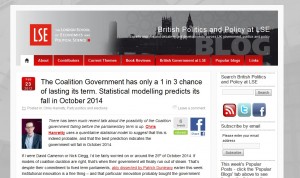 When our BPP blog began life as the “LSE Election Blog” in 2010, we were testing the waters a bit. From the outset, it quickly became clear that there was huge enthusiasm from readers, from LSE academics across many departments, and from other universities and other sectors entirely (like the media and pollsters) for this kind of initiative.

That immediate response gave us the confidence to convert the blog into British Politics and Policy (BPP) and make it a permanent effort at knowledge exchange. Even then we never really predicted that by now we would have over 7,000 readers every week and nearly 9,000 Twitter followers!

We believe that BPP has been successful because we try relentlessly to promote public understanding of social science and to go deeper into issues than conventional media allow. On British TV and radio academics (at least up until now) have tended to be the ‘talking heads’ in interviews and news articles, offering short comments, with little detail and no links to their wider work. British newspapers are also run chiefly by people with English literature or history backgrounds, who seem to view data and charts and evidence as anathema.

Yet we appeal to the huge and growing population of well-educated graduates who know a lot about politics and policy areas and want to know more. A few years ago, these folk were flocking to the BBC supersite, but now government cuts and newspapers criticisms have forced the BBC to cut back its text offerings to a shadow of its former self.

So we built the BPP blog as a space for more in-depth but still highly topical comment from academics at LSE and across the UK, and from the many skilled practitioners in NGOs, charities, the media, political life and think tanks who work tirelessly to sustain better quality political debate. We hope it’s proved its value already as a place where people can come to find new ideas and evidence-based arguments around the issues of our times. It’s also proved useful for media folk to use our blog as a source of information about a story, or to find the right academic expert to comment.

You use a multi-author format across each of the LSE blogs. For those new to academic blogging in particular, can you explain why you favor this over a single-author blog format?

According to some good estimates, perhaps 80 per cent or more of the single-author blogs on the Web are currently inactive, or are “desert blogs” that very rarely updated. And this is because people start them with high hopes, in determinedly individualistic mode, but find that hard to sustain after a while. Coming up with fresh content, day after day or week after week, is hard work for any academic, especially in the current climate where there are so many other demands on people’s time. But if you don’t post regularly, in a rhythm that is clear to readers so they know when to come back, then it can be hard to keep things going.

We don’t think single-author blogs are a sustainable or genuinely useful model for most academics — although all praise to the still many exceptional academics who can manage to keep up the continuous effort involved. By joining together and forming multi-author blogs, academics can mutually reinforce each other’s contributions. We have 350 authors now on British Politics and Policy, so if they blog with us twice a year we can post two posts a day without too much difficulty (as we do). And there are many synergies — for example, readers who come for a blog on political developments may stay reading for comments on social policy, or constitutional reform. On a multi-author blog, you often benefit from the content that others provide, and they often benefit from yours.

What are your three short but sure-fire tips for academic bloggers working to improve their craft?