At its founding several years ago, Miller-McCune immediately distinguished itself in the noisy marketplace of magazines by elevating coverage of the world of academic research. More recently, the Santa Barbara-based magazine renamed itself Pacific Standard — a kind of West Coast answer to The Atlantic — aiming to accent its distinctive scholarly coverage with a Western bent.

Journalist’s Resource recently caught up with Pacific Standard editor-in-chief Maria Streshinsky to get her thoughts on journalism and the world of research.

Journalist’s Resource: How would you describe the mission and market niche of Pacific Standard?

Maria Streshinsky: We were started by Sara Miller McCune, the founder and chairwoman of Sage Publications, in 2008. For many years Sara saw in journals research that was thought-provoking, game-changing, and important. There are a lot of really good reports and studies and research-based theories that get translated to a wider audience, but it doesn’t happen all the time — and not perhaps in a sufficient volume relative to the amount of good material coming out of academia. Anyway, not as much as Sara thought possible, so she started the magazine. As the magazine plugged along, it started to head into covering “solution based” stories. So what we’re doing with the rebranding of Pacific Standard is bringing it back to its core, and its primary mission to look at the original-source data and people doing research-based thinking about national and international issues. We want to showcase what the people who are deep into these issues are finding and saying — information that could illuminate how problem-solvers, and those in positions of power approach the problems we have. We want to keep the conversation as up to date, with the most current thinking, as possible. 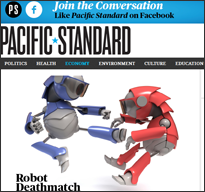 Add to that: We are taking a “western” perspective. We want to tell the nationally important stories that are coming out of this side of the country, and from the edges of the Pacific. So much innovation is coming from this side of the world — in technology, hard science, social sciences, even rockets to space — and we feel there is certainly enough coming from this side of the country to fill six print issues, and a few online stories a day. That said, we don’t want to only do western based, but it’s a market niche for us. So many of the nation’s biggest shifts have come from the West, and we want to showcase that. There have been a few terrific magazines out here that have been big successes: Wired, Mother Jones, Good — but the bulk of the big thought-leader magazines are based in the East. And there is a lot to say emanating from here.

JR: What does a typical Pacific Standard article set out to do?

Maria Streshinsky: Let me talk about our dream article, which we are working toward. What I’d love to do is find research that sheds different light on conventional wisdom. History has shown that over the years we get an idea in our mind, or we look at some data, and we push forward with good intentions. Take the DARE program to keep and get people off drugs. It started in the early ’80s in Southern California but the numbers seem to show it doesn’t work. All those years, and all that funding, and maybe it helped people, but as an overall program, it’s been a failure. If you have numbers that can show that program didn’t work, the questions becomes, “Why?” “What made us think it would?” And then, “With that knowledge, what are people doing out there that can really affect change?”

We are so new, so I don’t have a lot of examples yet of the perfect article, but we are looking for things like an upcoming piece by David Freed and his wife Betsy Bates Freed, who looked at research and found that even in crisis, most men won’t seek out help — and we focused on help in the form of talk therapy — but when they do the results are often better than for women. So why the disconnect, especially when men have been put in so many crisis situations in the last five years, in this economy?

The other kind of article that we are in search of is about people turning traditional practices upside down. One example was a small piece we did in the first issue of Pacific Standard. It’s a just a quick look at a diabetes specialist in Ohio. Diabetes is such a scourge, it’s such a health problem, and the numbers are growing really fast, which is going to lead to all sorts of other problems. The article’s subject, Dr. Shubrook, figured out that if he gave patients insulin as a first course of treatment, rather than as a last — after about nine other drugs that patients are typically put on — he found that it gave a patient’s pancreas a break, and it seems to be a game-changer. We don’t know if it will indeed be borne out, but it seems worth talking about. 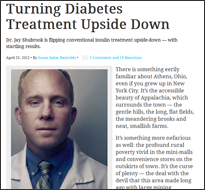 A number of other magazines do this really well, and we would like to be part of that — turning conventional wisdom on its head.

Add to that, we want to be showcasing innovation, which is where our western orientation comes in. I’m not at all saying that East Coast thinkers aren’t innovative, of course they are. But there’s a whole spirit of innovation and openness in the West — and it has to do with big thinking and big landscapes and people trying different things. For example, the president of the University of Arizona is pushing toward an interdisciplinary platform where people who have traditionally never talked, much less worked, together on issues, are being forced to — and they are having a lot of success. They are getting environmental scientists to talk to environmental engineers, and the like. That’s very interesting to us because it will push people in the academic world out of its comfort zone and into new ways of thinking, and maybe that will produce new approaches to problems. That could be really exciting when you think about the environment or energy, or education, or law enforcement. That is the kind of stuff we’d like to highlight. A lot of magazines want to be ideas publication, and I get it. Ideas are fun and interesting, and help us think forward.

JR: Part of our audience is of course educators and students, and journalists training up. It’s our feeling that Pacific Standard has a kind of theory of the case of where journalism could be in the future. Could you say a few words about why young journalists should get wonky and geeky and really into research?

Maria Streshinsky: I have an example that will sound a little off topic, but it’s not. I worked for two years at the Department of the Interior; I worked in Indian Affairs. And it was one of the best lessons for me as a journalist, because I had an inside seat for putting policies in place, I was at the core of how things were happening and why. No journalists were looking at the Code of Federal Regulations books, but those books tell you a whole lot about how and why a program is in place, and how it works. Since I was in public information, I was watching what people were publishing in the media, and there was this huge disconnect. In this case, the journalists were picking up a typical and long-held story about victimization and victimhood in Indian country. That story certainly has roots and facts behind it, but it isn’t where policy and thinking in Indian country is today. There are so many other stories, and there’s research around those other stories. There are things at the core of that issue that can truly show a different story. I feel young journalists should know how to identify rhetoric first off, and how to push it aside and be brave enough to ask the harder questions. Young journalists should know how to find real numbers, and real facts. It’s about critical thinking — questioning things, even if it feels uncomfortable to do so, before accepting them.

The instinct of young journalists should be: “Let me go to that researcher who has looked at the disparity between education in one county versus some other high-income area.” And then take that a step farther and figure out how the research was done, and why, and who funded it. If a journalist can understand what the numbers mean, what the data means — and where it came from — at a core level, they will have a much stronger story and argument to make. They can influence change. It’s the background thinking that can bolster an argument. We’re pushing more and more in the world of digital journalism toward opinion. Opinion can be fine. But the opinions that I want to hear are from the people who can really dig down and figure out what the actual numbers, the actual research says.

One thing we are doing in our magazine that I’m really proud of is a page called “Who Funded That.” It’s a simple listing of the funders of each completed study that we mention in the magazine. We feel it’s important to be transparent about the information we are using for our stories. And we hope that is the kind of thing that makes both a reader and a prospective writer look closer, and get a bigger picture of an issue.