Nonprofit organizations perform some of the most vital work in the United States, often serving the needy and filling gaps where society does not, or cannot, deliver services or provide safety nets.

The word “charity,” often applied to such institutions, can have the ring of altruism and irreproachable motives. But nonprofits are some of the nation’s largest, most powerful organizations: hospitals, foundations, universities and churches. Like any institution, they are susceptible to corruption, waste and abuse. Journalists should know that nonprofit groups are subject to government rules that regulate the activities, finances and operations that justify their ongoing tax-exempt “501(c)(3)” status — effectively, a government-endorsed subsidy. Further, many nonprofits depend on donations from the public, giving them an obligation to allocate these collective resources efficiently and effectively and uphold the public’s trust, especially when money is designated to help vulnerable populations.

For these reasons and more, journalists should scrutinize nonprofit activities just as they would for a government agency or corporation. There has long been criticism that news media are not aggressive enough in covering nonprofits.

NPR’s and ProPublica’s award-winning investigation of the Red Cross’s activities in Haiti stands as a reminder of the need to hold such organizations accountable. A glance at a few Pulitzer Prize citations shows more examples:

So, what’s a good starting point for such an investigation?

Often accountability stories begin with, and rely on, shoe-leather reporting and interviews with former employees or whistle blowers. But when collecting background material for a story, a key document to review is a “Form 990,” which nonprofits must file with the IRS every year. This record, which is publicly available, can provide a strong, factual basis for understanding an organization and its operations. Here are some places to look when researching this kind of information:

These public records provide crucial information about finances, assets, investments and expenditures. The example below (selected at random) is from the 2013 Form 990 filed by the Methodist Hospital Foundation in Houston, Texas: 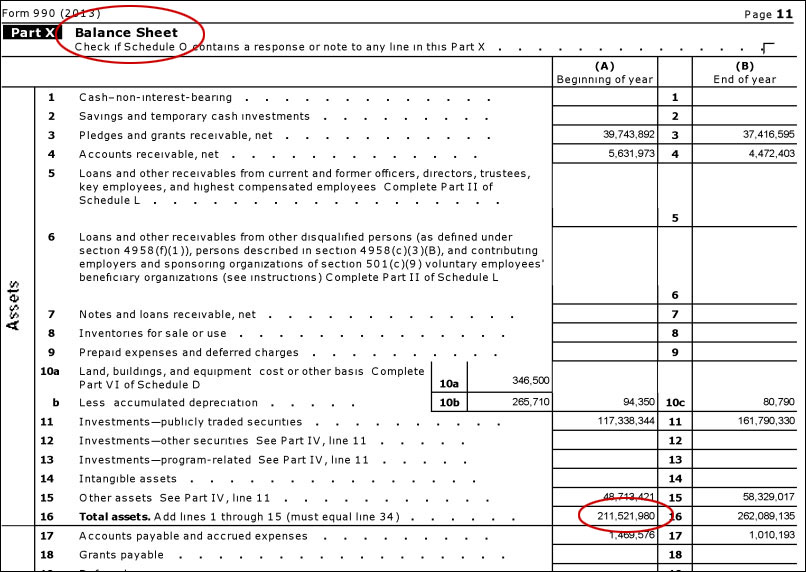 The 990 form also will list an agency’s board members and the salaries of top employees. Here’s another example from Methodist Hospital Foundation:

From schools to hospitals to religious institutions, it’s always worth checking out the internal details of organizations.