Renée Loth, a columnist for the Boston Globe, is the newspaper’s former editorial page editor. In that capacity, Loth was the highest-ranking woman at the Globe for nine years. Having covered presidential campaigns and served in various oversight capacities as editor, she’s spent a career both sorting through spin and practicing the art of informed opinion.

She is currently a Goldsmith Fellow at the Shorenstein Center. As part of our “Research chat” series, Journalist’s Resource recently caught up with her for some tips, reflections, and advice. With the rise of the blogosphere, opinion journalism has become the preferred mode for many. As Loth points out, however, there are some deeper questions and techniques that are worth considering for persuasive writers of all kinds.

Journalist’s Resource: What are some of the keys for putting together a well-informed, well-researched editorial, column or article? When packaging facts with a point of view, what are your rules of thumb?

Renée Loth: Every good opinion piece, op-ed or editorial starts with the idea. You need something fresh, distinctive and smart. Something that advances the [reader’s] understanding on an issue, especially if it is something, like healthcare or climate change, that has already been debated endlessly.

After you’ve got the idea, then the mechanics of persuasive writing come in to help you argue your position. Good opinion writing is harder than “straight” news reporting, because it requires all the same skills and tasks as good reporting — getting the facts, verifying them, getting both sides of the issue — plus an added layer of analysis and argument that drives home your point of view. Use the facts to back up your argument, not emotion or overheated rhetoric. That doesn’t mean the piece should be dry, of course. Use real people and experiences, do some reporting, engage the senses — these are techniques that help the piece come alive. I also think it’s useful to give the other side its due — even if it sets up a straw man you later knock down; it’s important to recognize the opposing argument. Just as in politics, you want to define yourself/your argument before your opponent can.

JR: When you were running the editorial page at the Globe, what was the process like in terms of background research and editing? How did you ensure high quality standards for informed opinion?

Renée Loth: During my time leading the editorial page of the Globe we had a board of nine veteran journalists (later pared down to five or six) who each had a “portfolio” of issues to cover: foreign policy, science/environment, education/urban affairs, housing, economics, and so forth. Every morning we met for an hour and each board member would report in on their beats, suggesting an editorial that might be particularly timely or ‘bubbling up” in the community conversation. We’d also respond to what was in the Globe that morning, but often we’d push our own campaigns regardless of what the news side was doing — the development of the Rose Kennedy Greenway, for example, or campaign finance reform.

We were blessed with an abundance of experts and specialists in the Boston-Cambridge area on almost any topic, and if we couldn’t come to a consensus decision on an issue, or if it was fairly new to us — something on medical ethics or a technological matter, for example — we’d bring in these experts to brief us. We also did a fair amount of “constituent service,” bringing in groups that wanted our ear on an issue, even — or especially — if we thought we would disagree with them in the end. It was important that even those whom we disagreed with felt heard.

Somewhat like the Supreme Court, we had a broad set of principles we’d adhere to — we were for tolerance, equity and compassion — and followed stare decisis on issues like the death penalty, where a 30-year tradition guided our thinking. But mostly we performed like regular reporters — out on our beats, digging up new information, learning about issues and then bringing them to the group for the added step of deciding what we thought about it.

One more thing: it’s important to remember that the editorial page is “the publisher’s page” and he reserved the right to veto or kill an editorial decision. Happily for me that very rarely happened.

JR: You’re taking an interest in news literacy these days and how the public digests and interprets information. Why? Are there issues in this area that journalists should know about, insights that could help create better, more targeted journalism? 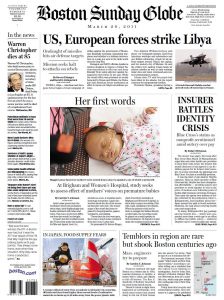 Renée Loth: In an age of radically blurred boundaries between news, propaganda, advertising and entertainment, it’s more important than ever for consumers to be armed with the skills to determine what information they can trust. News literacy attempts to train a generation of citizens — so-called Millennials, who have been raised without traditional gatekeepers or markers — how to be discerning consumers. Where is this information coming from? Is it reliable? How can you tell?

In fact, because of social networks, people are increasingly not just consumers of news but producers, sharing links and retweets. They also need to learn how to be responsible “publishers” — retweeting only information that meets various tests of verification and independence. In a way, these news literacy students, who are expressly not journalism majors, are getting an education in being mini-journalists themselves, applying the skills and disciplines of traditional journalists — verification, multiple sourcing, transparency, a certain agnosticism about where the reporting may lead — to their own consumption of information.

If these skills become habits and stick, the ultimate goal of news literacy is better citizens — more informed, engaged, confident, and active in civic life.

In my time at the Shorenstein Center I am taking a deep look at the news literacy program at Stony Brook University on Long Island, which is putting 10,000 students through a 14-week curriculum over five years. But similar, if smaller, efforts are afoot across the country, including many high schools.

JR: Any pieces of yours, either editorials you oversaw or columns, that you particularly enjoyed doing and might be worth contemplating for young journalists and bloggers?

Renée Loth: The editorial I wrote in 2003 supporting gay marriage four months before the Massachusetts SJC made its historic ruling. I think it does most of what makes for strong opinion writing.