This year marked the 40th anniversary of Roe v. Wade, the landmark Supreme Court decision upholding a woman’s right to an abortion. While some — including President Obama — celebrated the ruling and pledged to defend it, a number of state legislatures continue to work to limit access to abortions. In June, Texas state senator Wendy Davis filibustered a bill that would have made abortions illegal after 20 weeks of pregnancy.

In addition to trying to make obtaining abortions increasingly difficult, some of these same states are also trying to limit access to birth control, especially for teenagers. Beyond the inevitable rise in unintended pregnancies that can result, such laws have also been shown to increase states’ financial burdens: A reseach project at the University of Texas at Austin found that cuts to the state’s family-planning clinics ended up costing the state $163 million it would have saved by preventing 30,000 unintended pregnancies.

Research has shown that unintended pregnancies in the United States cost taxpapers as much as $12.6 billion every year. A 2011 study in Perspectives on Sexual and Reproductive Health found that states’ unintended-pregnancy rates vary considerably: In Mississippi there are 69 for every 1,000 women, more than twice New Hampshire’s rate, 36 per 1,000 women; the median U.S. rate is 51 per 1,000 women. On average, 53% of all pregnancies in the United States are unintended, the study shows. 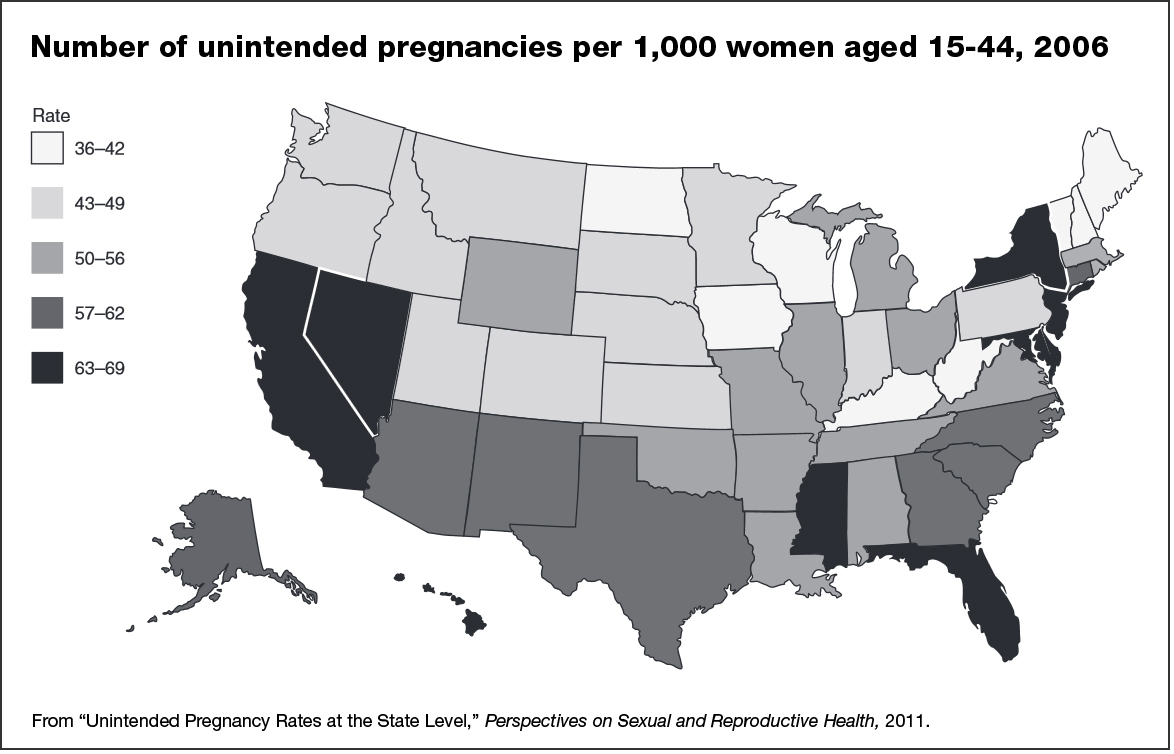 As part of the Affordable Care Act, which comes more fully into force in 2014, the White House moved ahead with a ruling that requires that most U.S. companies provide free insurance coverage for contraception for employees. The ruling came despite protests from religious organizations, and mandates coverage for a broad range of women’s health services, including FDA-approved birth control. (This has led to speculation that this issue may be taken to the Supreme Court.)

A 2012 study from Washington University in St. Louis published in Obstetrics & Gynecology, “Preventing Unintended Pregnancies by Providing No-Cost Contraception,” analyzes the relationship between free access to effective birth control and abortion rates. The researchers, Jeffrey F. Peipert, Tessa Madden, Jenifer E. Allsworth and Gina M. Secura, based their work on data from the Contraceptive CHOICE Project. The St. Louis initiative provided no-cost contraception for two to three years to 9,256 women at risk for unintended pregnancy. Using data from the Missouri Department of Health and Senior Services, as well as Planned Parenthood, the researchers were able to compare the rate of teen births and the percentage of repeat abortions — proxies for unintended pregnancies — of those in the CHOICE group with rates in the remaining metropolitan area and across the United States.

Key findings from the study include:

The researchers of this study note that the Contraceptive CHOICE Project provided participants with free access to all FDA-approved contraceptive methods, simulating the results in their region of the birth control mandate of the ACA coming into effect. The authors ultimately conclude that based on their findings, “unintended pregnancies could be reduced by providing no-cost contraception and promoting effective, underused contraceptive methods.”

Additional data on family-planning services provided by the U.S. government under Title X of the Public Health Services act are available from the U.S. Department of Health and Human Services’ Office of Population Affairs.

A related 2012 study, “Effectiveness of Long-acting Reversible Contraception,” examines a range of contraception methods and finds that the failure rates for birth-control pills, patch or ring over the first three years were were 4.8%, 7.8%, and 9.4%, respectively. By comparison, the failure rates over the first three years for IUDs or implants were 0.3%, 0.6%, and 0.9%. “IUDs and implants were thus 10 to 16 times as effective as the other long-term contraceptive options,” the researchers conclude.