In February 2015 the FDA issued a fresh advisory to consumers with peanut allergies: They should avoid foods with cumin, which may be contaminated with undisclosed peanut traces. Less than a week later, an important clinical trial funded by the National Institutes of Health (NIH) revealed that exposing at-risk children to peanut products as infants reduced the chance of developing such allergies later in life by as much as 81%.

Because severe peanut allergies can result in anaphylaxis — a whole-body reaction to an allergen that can be fatal in rare cases — the issue has emerged as a significant public policy issue, prompting legal disputes in certain instances, sometimes dividing parent groups and requiring vigilance on the part of everyone from food plant workers to school cafeteria staff.

The Centers for Disease Control and Prevention (CDC) notes that the percentage of U.S. children with food allergies of any kind has been growing, and an estimated 4% to 6% now have some kind of food allergy. 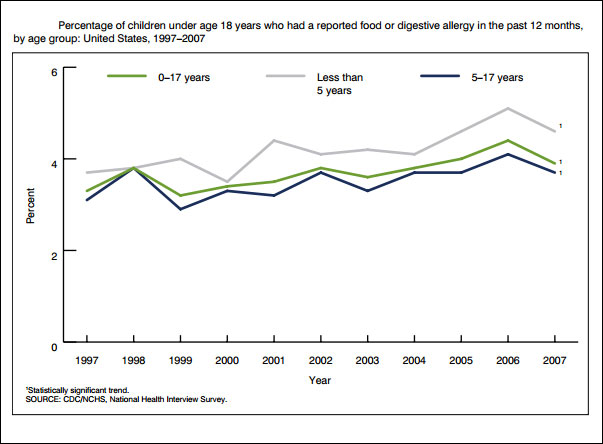 A 2010 study published in the Journal of Allergy and Clinical Immunology finds that “peanut allergy, TN [tree nut] allergy, or both continue to be reported by more than 1% of the U.S. population … and appear to be increasingly reported among children over the past decade.” This puts the estimated number of American children with such allergies at more than 3 million. Over the period 1997 to 2008, the prevalence of TN allergy increased from 0.2% to 1.1%, and peanut allergy increased from 0.4% to 1.4%. These rates are also similar to those reported in Canada, the United Kingdom and Australia, the authors note.

The costs of all these trends are not trivial. A 2013 study published in the journal JAMA Pediatrics estimates the annual cost of child food allergies in the United States — including medical costs and lost work and productivity by caregivers — at $24.8 billion, or $4,184 per year per child.

While many have come to accept this growing problem as a fact of life, some still puzzle over how such a common food — a classic staple for generations of peanut butter-and-jelly sandwich-eating kids — has rather rapidly emerged as a potentially dangerous substance requiring this level of public attention. A 2014 paper from researchers at the USDA and UNC Chapel Hill, published in the Annual Review of Food Science and Technology, “Strategies to Mitigate Peanut Allergy: Production, Processing, Utilization, and Immunotherapy Considerations,” reviews the large research literature associated with this phenomenon, providing a solid basis for an understanding of the latest science. The authors — Brittany L. White, Xiaolei Shi, Caitlin M. Burk, Michael Kulis, A. Wesley Burks, Timothy H. Sanders, and Jack P. Davis — examine relevant background and look at potential solutions to this problem.

The paper’s findings include:

The authors conclude that “clear and consistent legislation, policies, practices, etc., are needed for the consumer and producer alike to mitigate food allergy, and these continue to emerge.”