The Rim Fire in Yosemite National Park, which was started Aug. 17, 2013, by a hunter in Stanislaus National Forest who allowed an illegal fire to escape, had burned 237,341 acres as of Sept. 6, according to the U.S. Forest Service. That made it California’s third largest to date, requiring massive amounts of state and federal resources and personnel to contain it. To that point, it reportedly cost more than $70 million to fight.

How does this particular mega-fire fit into recent patterns? And given the general increase in large wildfires, particularly in the American West, what sorts of financial burdens is this placing on the federal government?

“The total amount of wildfire management (WFM) appropriations for 2012 was approximately $2.7 billion, not including an additional $407.5 million appropriated in 2013 to repay 2012 WFM wildfire suppression accounts,” notes an August 2013 report from the nonpartisan Congressional Research Service (CRS). “Over the last five years, WFM appropriations on average have steadily increased relative to earlier years.” The 9.3 million acres burned in 2012 was the third largest since 1960, the research service notes.

The following chart comes from the National Interagency Fire Center (courtesy of CRS): 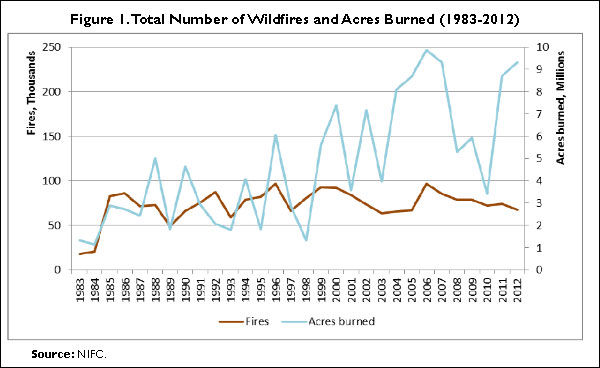 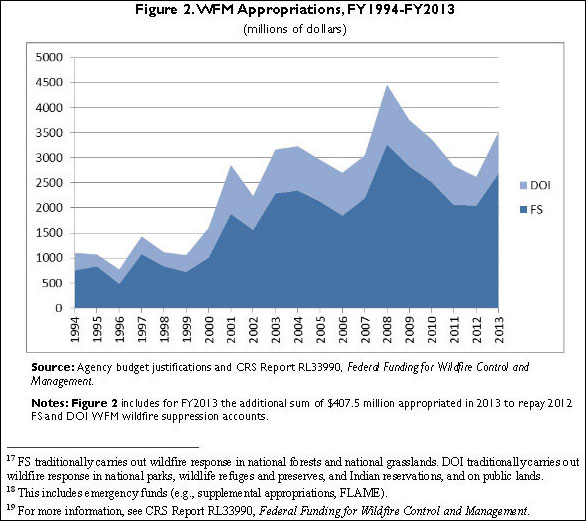 These steadily rising costs continue to challenge agencies responding directly as well as policymakers and economists, who are weighing the costs and benefits of doing more intensive and costly suppressions and preventative fuel treatments to avoid incurring huge expenses fighting large wildfires. A 2007 study published in the Western Journal for Applied Forestry found that, per acre, fires in California and the Pacific Northwest cost about twice as much to fight as those in any other region.

Further, research continues to find that the scope of wildfire burning is likely to increase in the coming decades, given climate change and a number of human-induced trends that are driving environmental change.

Harvard researchers published a 2013 paper in Atmospheric Environment, “Ensemble Projections of Wildfire Activity and Carbonaceous Aerosol Concentrations over the Western United States in the Mid-21st Century,” that projects much greater extents of burned land through the mid-21st century. Under certain scenarios, the researchers state, “the annual area burned will increase by 24-124%, with the largest increases in the Desert Southwest where the area burned is especially sensitive to temperature.” Further, they assert, “the length of the fire season increases by more than three weeks in the future atmosphere. These changes in fire emissions worsen air quality by the midcentury.”

Wildfires and costs to the federal government: Yosemite’s Rim Fire and beyond