On May 27, 2015, the Army Corps of Engineers and the Environmental Protection Agency (EPA) jointly issued a new set of rules relating to the scope of the 1972 Clean Water Act, potentially changing the nature of oversight of the country’s streams and wetlands in order to protect against pollution and destruction. News of this “Waters of the United States” plan was greeted by strong criticism from some members of Congress, who saw the move as an overreach by the federal government. Industry groups in agriculture, energy and construction likewise voiced significant concern.

The issue here — with wide implications for municipalities, and local news media, across the country — is the degree to which smaller bodies of water and wetlands may fall under federal regulations. The Army Corps and EPA note that the Clean Water Act technically applies to “navigable waters,” but several Supreme Court rulings have necessitated clarification on precisely what that means. Importantly, in the 2006 case Rapanos v. United States, the Court rejected the idea that merely being “adjacent” to a navigable waterway qualifies smaller bodies of water or marshes for federal regulation. But the Court’s majority was not monolithic in its reasoning, and in a concurring opinion for the majority, Justice Kennedy wrote that waters with a “significant nexus” to a navigable waterway could fall under the Clean Water Act, though he suggested that such a nexus needed to be better defined. The Army Corps and the EPA, which are sure to face legal scrutiny, rely heavily on Kennedy’s opinion, but they also state that the new rule is based on the peer-reviewed science:

Scientists routinely combine the effects of groups of waters, aggregating the known effect of one water with those of ecologically similar waters in a specific geographic area, or to a certain scale. This is because the chemical, physical, and biological integrity of downstream waters is directly related to the aggregate contribution of upstream waters that flow into them, including any tributaries and connected wetlands.

The EPA notes that it examined more than 1,200 peer-reviewed studies related to water quality and the connectivity of bodies of water and wetlands. The evidence is contained in the accompanying “Science Report,” which synthesized the literature.

While there are many threats to water quality — and the vast research literature can be overwhelmingly narrow and technical — one of the greatest and longest-standing concerns relates to the overall use of pesticides and the effects on both aquatic life and human health. A 2014 study by researchers with the U.S. Geological Survey, “Pesticides in U.S. Streams and Rivers: Occurrence and Trends during 1992−2011,” usefully provides a fairly broad, contextual view of facts and trends. In terms of the study’s scope and methods, the researchers — Wesley W. Stone, Robert J. Gilliom and Karen R. Ryberg — evaluated a “selected subset of pesticides in use over the last two decades that were sampled at enough sites to attain a reasonable national distribution and representation of land uses during 2002−2011. The analysis includes 123 pesticide compounds analyzed in filtered water samples assessed during 2002−2011, of which 47 also were assessed during 1992−2001.”

Findings of the study, which was published in Environmental Science and Technology, include:

“[S]ampling frequencies in this study were not adequate to reliably characterize the highest short-term concentrations and it focused on pesticides dissolved in water, whereas some hydrophobic pesticides, such as legacy organochlorines and pyrethroid insecticides, are important as contaminants of sediment and tissues and should be considered when evaluating stream ecosystems,” the researchers note. “Pyrethroid insecticides have been found to be toxicologically important in both agricultural and urban affected streams…. Clearly, some of the pesticides not included in the present assessment may add substantially to overall occurrence and potential environmental significance.”

Related research: For perspective on the scope of usage of these chemicals, see the USGS Pesticide National Synthesis Project, which charts the geographical use of chemicals such as atrazine: 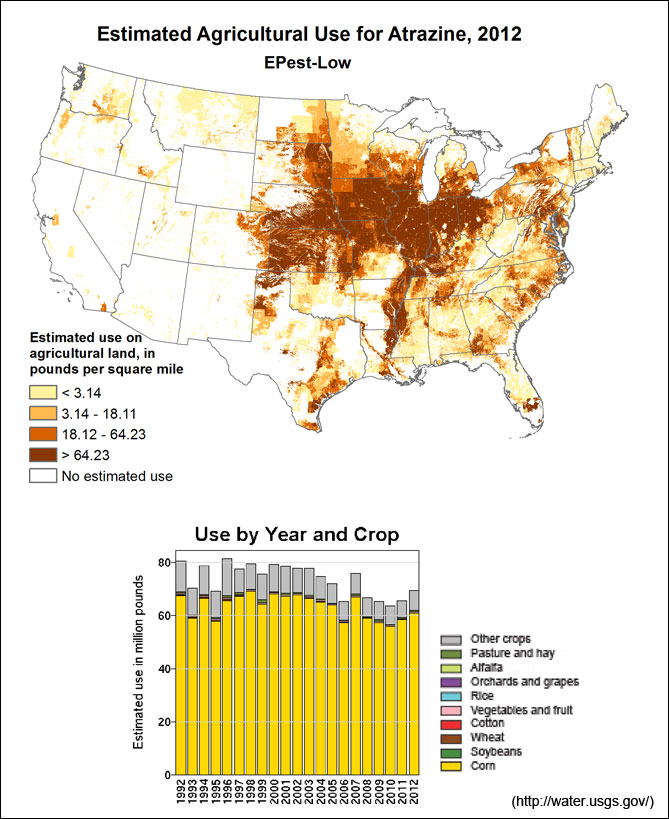