The societal costs and benefits of commuter bicycling

To reduce air pollution, traffic congestion and the health problems linked to sedentary lifestyles, many cities around the world — from Beijing to Boston, and Montreal to Mumbai — are working to encourage residents to bicycle more. These and hundreds of other communities have established bike sharing programs, regularly close down streets to attract walkers and cyclists, and are investing in cycling-specific infrastructure.

Studies have shown that while urban cycling has risks, generally attributable to motorists, the societal benefits far exceed them. All potential bicycle-promotion policies have unique trade-offs, however, and scientific research can help policymakers decide which options are most worth pursuing. A 2014 study published in Environmental Health Perspectives, “The Societal Costs and Benefits of Commuter Bicycling: Simulating the Effects of Specific Policies Using System Dynamics Modeling,” looks at four options for increasing cycling in the city of Auckland, New Zealand. (The city’s population was approximately 1.4 million in 2011, comparable to San Antonio, Texas, or San Diego, California.) Auckland’s strategic target is for walking and cycling to reach 35% of all trips by 2040, with no specified target for cycling within that percentage.

The researchers — based at the University of Auckland, University of Otago, Massey University, and the consulting group Synergia — constructed simulations that looked at infrastructure, social norms and car traffic, and made projections up to the year 2051 for bicycle use, car use, cycling-related injuries, and economic and environmental benefits. The four policy options analyzed were: (1) The creation of a regional cycling network (RCN), currently being pursued by the Auckland Regional Council. It involves marked lanes with no physical segregation on 46% of main roads, 25 kilometers of shared footpaths per 100,000 population and a small number of shared bus and bicycle lanes. (2) Arterial segregated bicycle lanes (ASBL), with one-way, barrier-separated cycling lanes on all main roads throughout the region. (3) Self-explaining roads (SER), which slow car traffic through structural changes and visual cues. (4) A combination of arterial segregated bicycle lanes and self-explaining roads (ASBL+SER).

The study is notable for its use of a “causal loop” structure that accounts for mutually reinforcing determinants of bicycle use — for example, cyclist injuries can reduce the number of cyclists due to the level of real or perceived danger. As a result, more chose to drive rather than cycle, further increasing the risk of injury to cyclists. 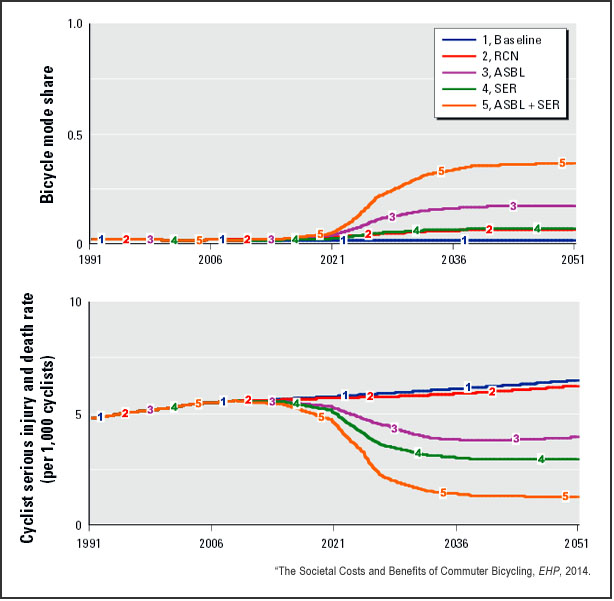 “In high-income, car-dependent cities such as Auckland, particular bicycle-friendly interventions will be crucial to turn patterns of declining commuter cycling into sustained growth that would meet climate and health goals,” the authors conclude. “Although our findings suggest that Auckland’s existing plan to develop a regional cycle network would likely have benefits, the simulation modeling suggests that it would not reverse the predicted business-as-usual increased rate of cycling injury. In contrast, a gradual transformation of all roads using best practice arterial and local street interventions could make a major contribution to regional transport targets. Our projections suggest that, assuming our assumptions are valid, this transition would be cost-effective, returning tens of dollars in benefits for every dollar spent.”

Related research: A 2011 study published in the British Medical Journal, “The Health Risks and Benefits of Cycling in Urban Environments Compared with Car Use: Health Impact Assessment Study,” used data from a four-year-old bike-sharing program in Barcelona with over 180,000 cyclists to weigh the health benefits of the program against the increased risks. Compared with residents who drive, those using the city’s bike-sharing system were found to experience an annual increase in 0.03 deaths from traffic accidents and 0.13 deaths from air pollution. However, as a result of increased physical activity, 12.46 deaths were avoided annually, meaning that overall, the program helped prevent 12.28 deaths per year.