Across North America, the demand for organic and local foods has been booming. In the United States, sales of organic foods grew from $11 billion in 2004 to an estimated $27 billion in 2012 according to the U.S. Department of Agriculture. The USDA also reports an increase in direct sales from local farms to consumers, which grew from about $700 million in 1992 to $1.2 billion in 2007. According to a report from its national organic industry association, Canada has also experienced a growth in sales of organic products between 2006 and 2012.

Despite increased interest in these products, consumers may find it challenging to understand the precise meanings of “local” and “organic.” In general, organic fruits and vegetables are produced with limited use of synthetic fertilizers and pesticides. For organic meat, dairy and eggs, farmers are prohibited from using hormones, antibiotics and non-organic feed. Animals typically must have some amount of access to open pastures. Local foods, according to the U.S. government’s official definition, are those that are sold either within 400 miles of the farm of origin or in the same state as the farm. According to the Canadian government’s definition, local foods are those that are sold either within their province of origin or fewer than 50 kilometers (31 miles) from their place of origin. 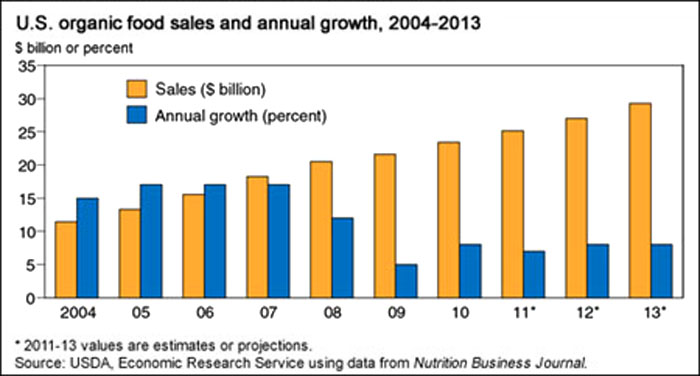 It is important to highlight that “local” and “organic” are not interchangeable terms. An organic apple might be grown in Chile and sold thousands of miles away in the United States. Milk purchased at a local farm may come from a cow that was treated with antibiotics and hormones.

A 2014 study published in the International Food and Agribusiness Management Review, “U.S. and Canadian Consumer Perception of Local and Organic Terminology,” looks at how well North American consumers understand the meanings behind the terms “local” and “organic.” The researchers — Ben L. Campbell from the University of Connecticut, Hayk Khachatryan from the University of Florida, Bridget K. Behe from Michigan State, Jennifer Dennis from Purdue, and Charles Hall from Texas A&M — surveyed residents of the United States and Canada to determine how well they understood and differentiated between the two labels in regards to fruits and vegetables. (The authors acknowledge USDA funding for the study.)

Noting the implication of consumers’ confusion between the terms “local” and “organic,” the authors state, “The importance of these results to agribusiness firms is considerable. Take for example the organic industry that has spent years (and millions of dollars) building brand awareness and now sees as much as 17% of the consumer base mistakenly associating local with organic…. Assuming only a small share of consumers now purchase local believing it is organic; there is considerable potential for harm to organic growers in the form of potentially reduced sales.”

Related research: A 2012 study in the Annals of Internal Medicine found that organic foods are not typically more nutritious than conventional foods, while a 2012 meta-analysis in Nature, “Comparing the Yields of Organic and Conventional Agriculture,” found that — depending on growing conditions — either organic or conventional agricultural methods could result in higher levels of crop production. 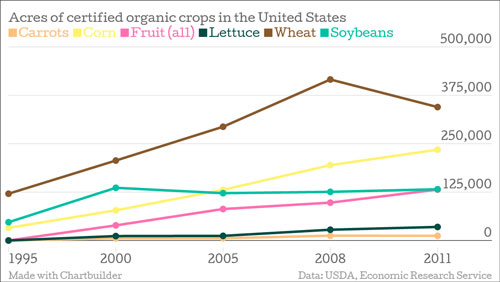