Plastics have been with us for more than a century, and by now they’re everywhere, for good and for ill. Plastic containers and coatings help keep food fresh, but they can also leave behind neurotoxins such as BPA in the human body. PVC is used for everything from pipes and flooring to furniture and clothes, but it contains compounds called phthalates that have been implicated in male reproductive disorders. Studies have also shown that childhood exposure to environmental pollutants can have significant negative effects later in life, including reduced labor force participation and even earnings.

To reduce plastic waste and negative effects, recycling programs have been implemented in many parts of the United States, but remain underutilized. Much is due to the nature of plastic itself, which often can only be “downcycled” rather than recycled — a torn plastic bag might eventually be transformed into a lunch tray, but it will never be a plastic bag again. Many cities and states have begun more serious efforts to restrict their use, but the subject remains a matter of considerable debate. While plastics also contain substantial energy, the vast majority ends up in landfills. Immense quantities of plastic are also sent to the developing world together with e-waste, where “recycling” frequently involves open-air burning.

No sector illustrates the inherent contradictions of plastic more than health care. A 2014 research review published in the Reviews on Environmental Health, “Plastics and Environmental Health: The Road Ahead,” notes that plastic is an ideal material for single-use disposable devices, because they’re “cost-effective, require little energy to produce, and are lightweight and biocompatible.” Yet the chemical compounds within plastic can damage human health. In their work, the scholars, Emily North and Rolf Halden of Arizona State University, summarize relevant research findings on the benefits, dangers, disposal of, and future innovative potential for plastics. The study received funding from the National Institute of Environmental Health Sciences, a government research body. 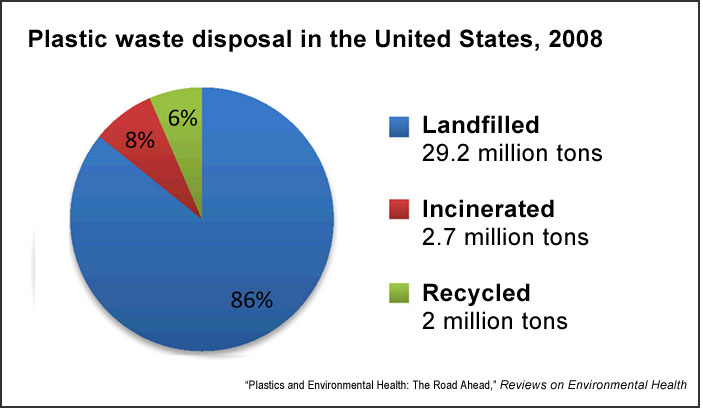 Biodegradable plastics hold promise, but are not currently a perfect solution:

The authors state that a critical examination of how we should be using plastics is necessary, suggesting that we use them to yield truly important benefits but turn to alternatives and reusable products where possible: “Although there have been great benefits from using plastics, especially in the health care sector, there needs to be a second revolution of plastics in which life-cycle considerations are integrated with production and consumption decisions to handle the voluminous present-day flow of plastics, most of which being destined for disposal after single use.”

Related research: A 2012 study published in the Review of Environmental Economics and Policy, “Alternative Policies to Increase Recycling of Plastic Water Bottles in the United States,” explores how to improve recycling rates. The researchers, from Duke University and Vanderbilt University, used survey data from more than 600 respondents in 2009 to examine the effects of different recycling regimes on the recycling rates for plastic water bottles.

Plastics, human health and environmental impacts: The road ahead