In August 2015, the U.S. Environmental Protection Agency announced its new Clean Power Plan, which includes the first national standards for reducing carbon pollution from power plants. The plan requires states to reduce carbon-dioxide emission rates, while allowing flexibility in how the goals are achieved. For example, states could employ a mix of improving the efficiency of existing generation capacity, reducing demand through conservation methods, and, of course, increasing the proportion of electricity obtained from less carbon-intensive fuel sources.

Shortly before the plan was finalized, the U.S. Energy Information Agency released a detailed analysis of the plan’s probable impacts. The agency found that switching generation capacity from coal to natural gas was likely to be the dominant strategy employed by states, with a significant reduction in annual emissions — up to 625 million fewer metric tons of CO2 in 2030, depending on the scenario. Wind and solar are expected to play a “growing role” by the mid-2020s, and by 2030 would generate more than 400 billion kilowatt hours of electricity annually.

While renewables have long faced the challenge of providing backup capacity — fossil-fuel and nuclear plants currently play that role — a 2015 study in Nature Climate Change indicates that battery technology is advancing more rapidly than anticipated. In May the electric car manufacturer Tesla announced it was developing a battery system intended to store power generated from household solar during the day for nighttime use.

A key question with respect to renewable energy growth is the greenhouse gas emissions associated with specific technologies. While renewable power sources are themselves carbon-free — it’s just sunlight, wind and water, after all — the components and facilities have to be manufactured, built, and maintained, and at the end of their lives, plants must be retired or replaced, and their components disposed of or recycled. A landmark 2008 study in Energy Policy examined nuclear power from this perspective and found that the mean value of CO2 emissions over a reactor’s lifetime was 66 grams per kilowatt-hour of electricity — less than the best fossil fuel (natural gas), but more than the most carbon-intensive renewable (biomass).

A 2014 research review and meta-analysis published in Energy Policy, “Assessing the Lifecycle Greenhouse Gas Emissions from Solar PV and Wind Energy: A Critical Meta-Survey,” tackles this question for renewables. The authors were Daniel Nugent and Benjamin K. Sovacool of Vermont Law School; Sovacool is also at Aarhus University in Denmark and authored the 2008 nuclear-power study. In their research, they examined more than 153 studies on the life-cycle CO2 emissions of a range of wind and solar photovoltaic (PV) technologies, and selected 41 for deeper analysis, allowing the scholars to better understand the emissions of current technologies as well as pinpoint where emissions occur and under what circumstances, and thus how they might be reduced. All the studies chosen for inclusion were peer-reviewed and more than 70% were published within the last five years.

The metastudy’s key findings include: 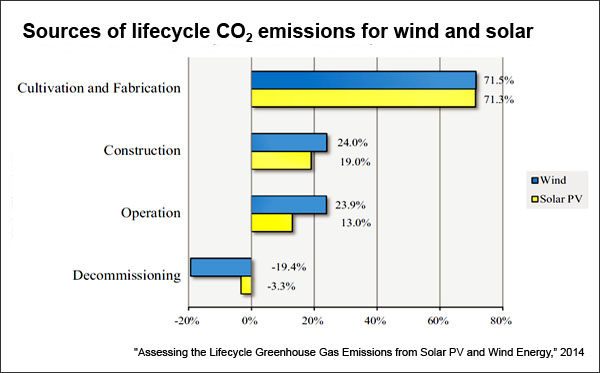 “By spotlighting the lifecycle stages and physical characteristics of these technologies that are most responsible for emissions, improvements can be made to lower their carbon footprint,” the authors state. Looking forward, they recommend that future studies should be more methodologically rigorous, and that key questions such as the impact of energy storage on lifetime emissions be examined.

Related research: A 2015 report in the Annual Review of Environment and Resources, “Opportunities for and Alternatives to Global Climate Regimes Post-Kyoto,” compares international policies for mitigation of climate change to the Kyoto Protocol. A 2014 study in Renewable Energy, “How Does Wind Farm Performance Decline with Age?” examined the long-term performance of 282 wind farms in the United Kingdom.

She joined Journalist’s Resource in 2015 after working as a reporter for newspapers and radio stations in the U.S. and Central America, including the Orlando Sentinel and Philadelphia Inquirer. Her work also has appeared in publications such as USA TODAY, the New York Times, Chicago Tribune and Washington Post. She has received a multitude of national, regional and state-level journalism awards and was named as a Pulitzer Prize finalist in 2013 for an investigative series she led that focused on hazing and other problems at Florida A&M University. Ordway was a 2014-15 Fellow of Harvard’s Nieman Foundation for Journalism. She also serves on the board of directors of the Education Writers Association. @DeniseOrdway

Racist acts against Asian Americans and Pacific Islanders in the United States, including harassment and violence, have been on the rise throughout the Covid-19 pandemic. Here are several tips and resources to help you cover this topic.

In 2019, the World Health Organization listed vaccine hesitancy as one of the top 10 threats to global health, so it’s important for journalists to shed light on the issue and educate the public about it.

We summarized studies that look at deaths in police custody from multiple angles, including restraint methods and police force demographics.