Human appropriation of global production in the 20th century

“Sustainability” is a term that is frequently thrown around rather loosely, but its use tends to be restricted to specific practices or areas — sustainable urbanism, agriculture or energy, for example. While there has long been concern over rising human population levels and resource consumption, the larger question of where the ultimate limits might be — the Earth is a fixed size, after all — has been subject to as much rhetoric-charged debate as considered research.

For baseline figures on global sustainability, the United Nations’ Food and Agricultural Organization is a good source. According to the FAO, the surface area of the earth is 13 billion hectares (the equivalent of 32 billion acres, 50 million square miles, or 130 million square kilometers). Of this, approximately 1.4 billion hectares — 10.6% — was arable land, meaning that it is currently cultivated, or has been, within the last five years. Forests, grasslands and wetlands can be converted to fields, of course, but any shift has consequences — less CO2 capture and increased greenhouse gasses; biodiversity loss; additional burdens on already limited water supplies. (A wide range of global and national statistics and data-visualization tools are available on the organization’s FAOSTAT website, as well as from the World Bank.)

Another option for producing more food is increasing the output of currently cultivated lands through agricultural intensification. The “green revolution” that started in the 1940s transformed farming, with increased use of mechanization, irrigation and new fertilizers and pesticides. Yields jumped, but so too did water and air pollution and aquifer depletion. According to a 2012 study in the Proceedings of the National Academy of Sciences, agriculture already consumes 92% of the freshwater used annually.

To better understand global and regional trends, scholars have been working to more accurately measure humankind’s growing impact on the biosphere, from our consumption of food, organic materials and other products of sun-powered energy, to our effect on the composition of the atmosphere, biodiversity and food webs. Scientists have developed two key terms in this area: The first is “net primary productivity” (NPP), which is the net amount of solar energy converted through photosynthesis to organic matter. It represents the primary food energy source for the world’s ecosystems and is measured in units of elemental carbon. The second term is “human appropriation of net primary productivity,” or HANPP, which is our consumption of net primary productivity — how much we’re taking for ourselves, versus leaving for the rest of the world ecosystem.

A 2013 study in Proceedings of the National Academy of Sciences (PNAS), “Global Human Appropriation of Net Primary Production Doubled in the 20th Century,” looks at long-term trends in HANPP. The researchers, based at a number of European institutions as well as Princeton University, based their work on data from 1910 to 2005. In the study, total HANPP is the sum of two subcategories, HANPPluc (land-use change) and HANPPharv (the quantity of NPP consumed by people). Calculating HANPPluc requires estimating the NPP that would have been generated had the original vegetation been left undisturbed; this is called NPPpot. 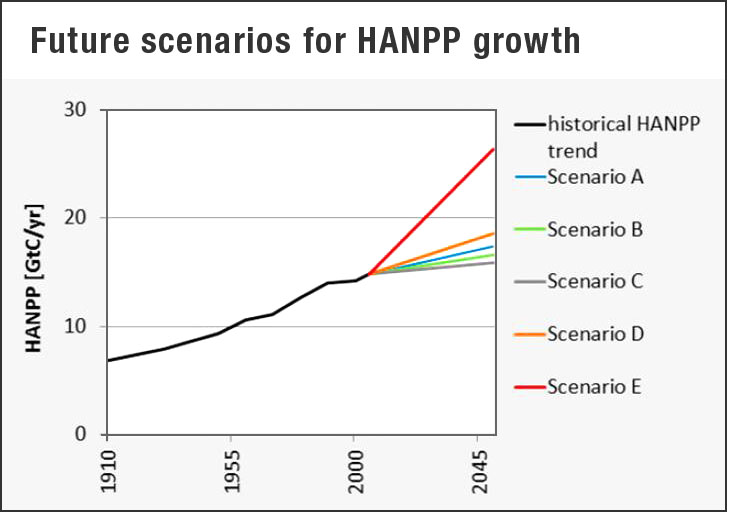