One of the few constants in technology is change — the only question is how fast it arrives. For centuries the term “drone” strictly referred to male bees, but by the 2000s it was most often heard when discussing remotely controlled — and deadly — military aircraft. Not long after, drones were available as toys, and next year they could be delivering packages in your neighborhood.

In recent decades energy production has shifted with similar speed: Hydraulic fracturing was first invented in the 1940s, but when combined with horizontal drilling in the 2000s it ignited a boom in oil and gas production in the United States. Renewable energy has also grown rapidly as technology has improved: U.S. wind power produced just 70 trillion BTUs of energy in 2001, yet by 2010 had risen to 924 trillion BTUs — more than 13 times higher. By 2014, wind generated more than 181 gigawatt hours of power, up 8% from 2013’s total. Looking forward, the United States expects to get 35% of its electricity from renewable sources by 2050, and research indicates that 80% is feasible with current technology.

Change tends to accelerate at “inflection points,” where a technological advance or shift in policy makes what was a theoretical possibility a practical — and profitable — reality. A 2015 study in Nature Climate Change, “Rapidly Falling Costs of Battery Packs for Electric Vehicles,” evaluates the future prospects for battery electric vehicles (BEV). A key question is cost and capacity of their battery packs, by far their most important component: The more capacity batteries have, the longer electric cars can run; the lower the cost, the better they can compete against gas-powered vehicles in the marketplace. Longer range would also reduce the necessary density of any nationwide charging network, no small matter.

The study’s authors, Bjorn Nykvist and Mans Nilsson of the Stockholm Environment Institute, analyzed more than 80 estimates from 2007 to 2014 to trace advances in the costs and capacity of Li-ion battery packs for electric vehicles. “The literature reveals that costs are coming down, but with large uncertainties on past, current and future costs of the dominating Li-ion technology,” they note. 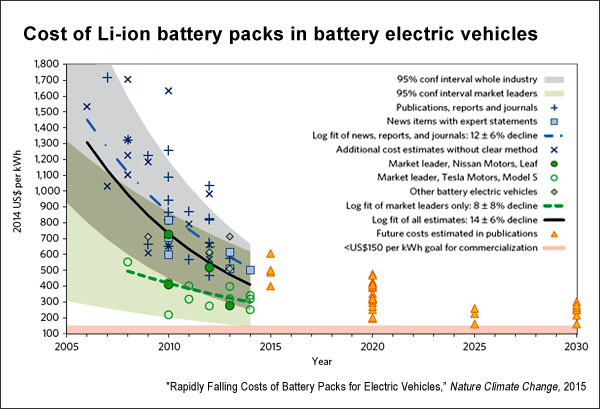 “The costs of Li-ion battery packs continue to decline and the costs among market leaders are much lower than previously reported,” Nykvist and Nilsson conclude. “This has significant implications for the assumptions used when modeling future energy and transport systems and permits an optimistic outlook for BEVs contributing to low-carbon transport.”

While advances in battery technology could encourage wider adoption of EVs, the corresponding reduction in greenhouse-gas emissions is tied to the fuel used to produce the electricity — and that depends where you plug in. In Texas, it could be wind (10 grams of CO2 per kWh); in Illinois, nuclear (66 grams per kWh over a plant’s entire lifecycle); and in West Virginia, coal (more than a kilogram of CO2 per kWh). Running an EV with electricity from a coal plant thus produces as much C02 as a gas-powered car getting 33 miles per gallon — not a great advance.

Below are a selection of additional studies on technology and renewable energy, relevant to the idea of sustainable electrical generation and transportation:

Findings: Across the battery-capacity and charging-infrastructure scenarios examined, the lowest-cost solution is for more drivers to switch to traditional hybrid electrics or low-capacity plug-in hybrid electric vehicles (PHEVs): “Charging infrastructure is generally not necessary for operation of PHEVs and substantial gasoline displacement can be achieved solely with home charging.” Installing charging infrastructure would provide lower gasoline savings per dollar spent than paying for increased PHEV battery capacity: “We find that the maximum cost per gallon saved for increased [all-electric range] is 5% to 40% less than the minimum cost per gallon saved when installing charging infrastructure, depending on vehicle class.”

Summary: “Electric vehicles (EVs) coupled with low-carbon electricity sources offer the potential for reducing greenhouse gas emissions and exposure to tailpipe emissions from personal transportation. In considering these benefits, it is important to address concerns of problem-shifting…. We find that EVs powered by the present European electricity mix offer a 10% to 24% decrease in global warming potential (GWP) relative to conventional diesel or gasoline vehicles assuming lifetimes of 150,000 km. However, EVs exhibit the potential for significant increases in human toxicity, freshwater eco-toxicity, freshwater eutrophication, and metal depletion impacts, largely emanating from the vehicle supply chain. Results are sensitive to assumptions regarding electricity source, use phase energy consumption, vehicle lifetime, and battery replacement schedules. Because production impacts are more significant for EVs than conventional vehicles, assuming a vehicle lifetime of 200,000 km exaggerates the GWP benefits of EVs to 27% to 29% relative to gasoline vehicles or 17% to 20% relative to diesel. An assumption of 100,000 km decreases the benefit of EVs to 9% to 14% with respect to gasoline vehicles and results in impacts indistinguishable from those of a diesel vehicle. Improving the environmental profile of EVs requires engagement around reducing vehicle production supply chain impacts and promoting clean electricity sources in decision making regarding electricity infrastructure.”

Highlights: “The past year brought a rebound of green energy investments worldwide with a surge of a solid 17% to $270 billion. Brushing aside the challenge of sharply lower crude oil prices, this sudden increase reversed the investment dip of the past two years and was mainly driven by investments in solar and wind energy…. Wind, solar, biomass and waste-to-power, geothermal, small hydro and marine power contributed an estimated 9.1% of world electricity generation in 2014, compared to 8.5% in 2013. This would be equivalent to a saving of 1.3 gigatonnes of CO2 taking place as a result of the installed capacity of those renewable sources. As in previous years, the market in 2014 was dominated by record investments in solar and wind, which accounted for 92% of overall investment in renewable power and fuels. Investment in solar jumped 29% to $149.6 billion, the second highest figure ever, while wind investment increased 11% to a record $99.5 billion. These expenditures added 49GW of wind capacity and 46GW of solar PV, both records.”

Insights: “Solar photovoltaics is already today a low-cost renewable energy technology: Cost of power from large scale photovoltaic installations in Germany fell from over 40 ct/kWh in 2005 to 9ct/kWh in 2014. Even lower prices have been reported in sunnier regions of the world, since a major share of cost components is traded on global markets. Solar power will soon be the cheapest form of electricity in many regions of the world: Even in conservative scenarios and assuming no major technological breakthroughs, an end to cost reduction is not in sight. Depending on annual sunshine, power cost of 4-6 ct/kWh are expected by 2025, reaching 2-4 ct/kWh by 2050 (conservative estimate). Financial and regulatory environments will be key to reducing cost in the future: Cost of hardware sourced from global markets will decrease irrespective of local conditions. However, inadequate regulatory regimes may increase cost of power by up to 50 percent through higher cost of finance. This may even overcompensate the effect of better local solar resources.Most scenarios fundamentally underestimate the role of solar power in future energy systems: Based on outdated cost estimates, most scenarios modeling future domestic, regional or global power systems foresee only a small contribution of solar power. The results of our analysis indicate that a fundamental review of cost-optimal power system pathways is necessary.”

Summary: “The most widely used solar technology involves photovoltaic (PV) solar modules, which draw on semiconducting materials to convert sunlight into electricity. By year-end 2013, the total number of grid-connected PV systems nationwide reached more than 445,000. Domestic demand is met both by imports and by about 75 U.S. manufacturing facilities employing upwards of 30,000 U.S. workers in 2014. Production is clustered in a few states including California, Ohio, Oregon, Texas, and Washington…. Domestic PV manufacturers operate in a dynamic, volatile, and highly competitive global market now dominated by Chinese and Taiwanese companies. China alone accounted for nearly 70% of total solar module production in 2013. Some PV manufacturers have expanded their operations beyond China to places like Malaysia, the Philippines, and Mexico. Overcapacity has led to a precipitous decline in module prices, which have fallen 65% to 70% since 2009.”