The flash floods that have hit Colorado and the repeated storms and inundations in North Dakota earlier in 2013 make it easy to forget that the American West and Midwest have struggled through significant drought conditions over the last several years. States with fast-growing cities face particularly difficult situations, with conflicts between urban and rural areas on the rise as water resources shrink.

Particularly troubling are the results of a study published in June in the Proceedings of the National Academy of Sciences. It indicates that sections of the Ogallala Aquifer in the High Planes, which nourishes a significant proportion of the wheat, corn and cotton grown in the United States, are being depleted at alarming rates. At current rates of water use, farm production is projected to peak in 2040 unless dramatic changes are made, particularly by increasing conservation measures.

The Colorado River basin is another example: The river is the source of water for more than 30 million people in seven U.S. states as well as 4 million acres of agricultural land. Yet research indicates that by 2035, average streamflows could decrease by 3%. Major population centers in the basin include Las Vegas, Phoenix and Tucson, all of which will see significant growth during that time. Other major U.S. cities face similar challenges: During the 2011 drought, inflows to the Highland Lake reservoirs above Austin, Texas, fell to 1% of their annual average; while 2012 was a less severe year, a Stage 2 drought was declared. Increased energy exploration is also playing a role: the “fracking” process used to extract natural gas and shale oil demands significant amounts of water, and what drillers take isn’t available for cities and farmers. 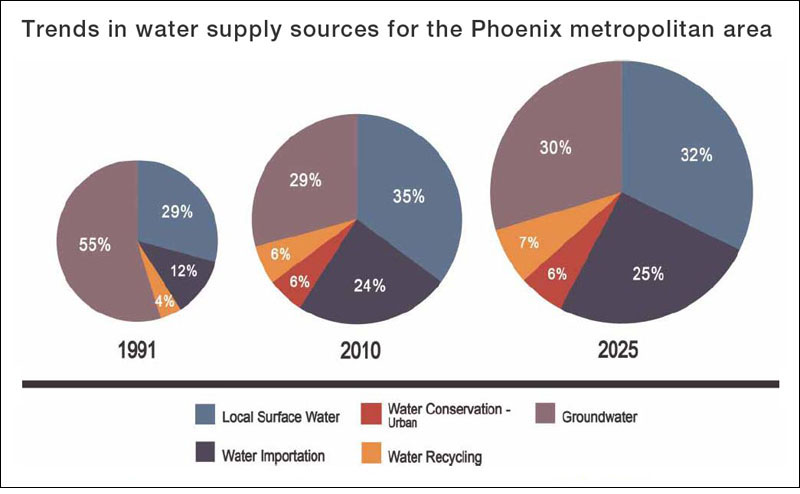 In response to the declining availability of surface water, users have been increasingly turning toward groundwater, but the strategy is showing its limits: For example, 60% of U.S. irrigation depends on aquifers, but if current trends continue, as much as 35% of the southern High Plains will be unable to support irrigation within the next 30 years. A 2013 study from the U.S. Forest Service, Princeton University and Colorado State University indicates that climate change could substantially increase water losses due to rising evaporation and cooling demands, worsening an already difficult situation.

The question becomes what cities and their surrounding regions can do. A 2013 study in Water Policy, “Tapped Out: How Can Cities Secure Their Water Future?” looks at four municipalities — Phoenix, Arizona; San Antonio, Texas; San Diego, California; and Adelaide, Australia — to better understand how their water supply and management strategies have evolved over time. The researchers, at the Nature Conservancy, University of Virginia and University of Minnesota, note that “half of all cities with populations greater than 100,000 are located in water-scarce basins, and in these basins agricultural water consumption accounts for more than 90% of all freshwater depletions.” The study provides historical insight as well as a list of best practices that other cities and towns can use as a sourcebook.

The inter-dependency between cities and farms suggests that there is considerable opportunity for the two to form water partnerships, the researchers state. “If cities could help farmers consume less water, this could free up a new source of water supply for the city while potentially improving the price and reliability of agricultural products.”

A useful site for policymakers as well as journalists covering these issues is the United States Geological Survey’s National Water Census. The site’s goal is to build “national capacity to scientifically assess, account for, and analyze water availability. This includes new and improved methods of accounting for human factors and environmental/ecological criteria that affect water management decisions.”

Related research: A study from the Yale School of Forestry and Environmental Studies and the Harvard Kennedy School, “Comparing Price and Non-Price Approaches to Urban Water Conservation,” explores the cost-effectiveness, distributional equity, enforceability and political feasibility of the two approaches. Overall, it finds that using prices to manage water demand is more cost-effective than methods such as rationing.

“Economic effects of COVID-19 have been enormous on LGBTQ people, so it’s not just a viral reality,” says Dr. Perry Halkitis, dean of Rutgers’ School of Public Health, whose research focuses on LGBTQ populations. “It’s a social reality. It’s an economic reality. It’s a psychological reality.”

By studying research on how the news media portray Asian Americans, journalists can gain insights into how their work is perceived and its consequences.

The conversation about newsroom diversity, race in journalism and coverage of race in the news is one the profession has been circling back to for decades. These seven papers can help inform the discussion.

Droughts and the struggle to balance urban and rural water demands