Alison J. Head is one of the leading experts in the United States on how post-secondary students find and use information in the digital age.

Head is the lead researcher of the University of Washington’s Project Information Literacy (PIL), where she and other scholars examine information-seeking behaviors of students nationwide through surveys and studies. She’s also a fellow at the Berkman Center for Internet & Society at Harvard. Her work has prompted her to advocate for the addition of a new “R” — research — to the traditional core educational subjects of reading, writing and math.

A Boston University journalism school graduate, she earned her Ph.D. at the University of California, Berkeley. She has also worked as a reporter and researcher at newspapers in California.

Her latest PIL study, “Learning Curve: How College Graduates Solve Information Problems Once They Join the Workplace,” finds that, though young professionals may have digital skills, they do not necessarily develop important traditional research skills. The findings “confirm a new instinct for ‘instant information’ among the digital generation,” Head writes in an article for the Seattle Times. She continues:

Yet these online searching techniques are simply not enough. As we face the challenges of educating today’s students, we need to recognize that not all learning solutions are found online — and never will be. In the race to bring ever more technology into the classroom we need to dial back and make sure students are also being taught old-school methods of communication and research that were second nature to previous generations.

As part of our research chat series, Journalist’s Resource spoke with her about her scholarship and implications for educators.

Journalist’s Resource: What are some of your key findings in terms of how students do research online? What should educators know about all this?

Alison Head: Our interviews and surveys of college students have revealed some surprises for us as researchers. We have found it doesn’t matter so much where a student is enrolled — a community college, a four-year public or some prestigious four-year private institution; today’s students have tremendous difficulty with the research process, whether they are trying to solve information problems for courses or in their everyday lives. At first this seems paradoxical, even unbelievable: After all, information is everywhere and always available to almost everyone.

Course research is often inherently risky for students. It’s like gambling. Students are placing a bet when they choose a topic for a course assignment. They may think they have a topic that is really cool, say the use of social media in the Occupy Wall Street movement. But when they go out and see if there is enough information out there, well, this raises the stakes in unanticipated ways. As one student we interviewed explained, the topic — not the professor — could fail them, especially if the student doesn’t find enough sources to research and write a paper.

So most students use a risk-averse strategy. They choose safe topics where there is a lot of information available. Think Gabby Giffords and gun control. They rely on the same tried-and-true sources to conduct research from one assignment to the next — course readings, Google, library databases, especially JSTOR, and instructors — yes, people. This means the large majority of students may not ever use the huge number of resources available to them on campuses — books, subject indices, rare books, multimedia, and/or librarians. Instead, most students have closed down the aperture of all that is available to them — research is not a mutable inquiry, it’s a linear process where the students’ goal is to satisfice, as Nobel Laureate Herb Simon first said, or to do the minimum amount of work to get to a goal in a way that both satisfies and suffices. We have concluded most students rely on a small set of familiar sources and use a model driven by efficiency and predictability.

JR: One idea you’re obviously raising is that professors might need to engage students more about how to do research. What are some of the things teachers should be talking about with students?

Alison Head: Now that’s interesting: What’s a professor to do? What do professors do with findings like ours? Here’s an idea: Educators may want to take a hard look at how they teach critical inquiry. In 2010, PIL conducted another study where we analyzed 191 handouts distributed by professors to students for completing a course-related research assignment. In a 2009 PIL survey, we had discovered 74% of our student sample — more than 2,300 undergraduates — considered such handouts one of the most useful things a professor could do to help them get a good grade.

In the handout study, we found a very large majority of handouts were incredibly formulaic and prescriptive. Most had details about how many pages a research paper should be, how many sources it should have and how they should cite sources using style guides, such as APA or MLA. This may help, but students ended up with a basic checklist of requirements. Handouts helped them in a prescriptive way, but they were probably not going to lead to the deep learning that so many professors hold dear.

In all fairness, professors do discuss assignments with students in class discussions, lectures and during office hours. They don’t just rely on a single handout when assigning research to students or teaching critical inquiry. Still, students rely on these handouts as an important mechanism for leading, hopefully, to their own success. Here’s where it is even more interesting: In the larger sense, the handouts we studied offered little guidance about how to traverse the information landscape. Very few — only 15% — specified using some kind of scholarly databases. Only 14% suggested using a librarian for help. Just one in five mentioned plagiarism. Handouts did not send students to librarians — who are best positioned to help — but instead sent them to a single book somewhere on the shelf.

The larger takeaway from this study is that professors conduct research much differently than their students do. Professors are on a quest to generate knowledge, not to fulfill assignments using secondary sources. Many professors, especially those at research institutions, spend their time trying to shift some paradigm relevant to their field. There is a large disconnect between what professors call research and what students are being asked to do as research — and handouts don’t help much. There is so much that gets lost in translation during communication between professors and students. One student we interviewed put it best by saying, “When I asked about doing research, my professor told me he goes to Italy and looks at medieval documents. But I have a paper due in two weeks. I don’t have the funds to go Italy and I don’t read Italian. What am I supposed to do now?”

JR: What would you advise journalism professors as they talk about these subjects with students?

Alison Head: If I were a journalism professor, I would look at the trouble students have with framing a research question. For students today, this seems to be the number one challenge, especially because there are so many questions and so many sources to use for exploring topics when it comes to research. The Web greatly complicates this fundamental process of winnowing and synthesizing — that’s where it is different for students than it was before. Even journalists I count as friends have trouble keeping up with all that is out there.

But I have to give credit where credit is due when it comes to journalism education: Journalism educators have always taught the uncanny skill of knowing what makes a good story and how to define with precision the angle of a story. Journalism students learn to think about readers and why a story has value, especially how it should be “played.” Interestingly, this set of journalistic competencies is closely related to the problem most students have with defining the task of research. So journalism professors may be teaching a competency that has great value not just in journalism, but also well beyond. 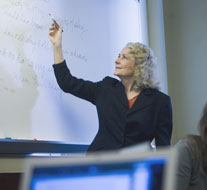 Another useful skill that some journalism educators teach is how to write the “nut graf.” The beauty of a nut graph is that it’s firmly imbued with relevance. A great nut graf forces a writer to define and narrow, which is also what we found most students, no matter what their major, struggle the most with in their course-related research. As the Philadelphia Inquirer editors have defined a nut graf, “It tells the reader why they were invited to the dinner party.” In other words, nut grafs tell readers why they should keep reading and why a topic matters — the purpose of a story. A nut graf is an intellectual construct that solves a lot of problems. I’d say it’s a pretty good way of narrowing and defining a topic down so it’s manageable and engaging for readers.

JR: Do you have personal tips for journalists trying to navigate the scholarly world and find high-quality sources?

Alison Head: When I’m conducting scholarly research, I often turn to citation indexes and peer-reviewed information to get the lay of the land. I’ll use a source such as the Social Science Index. A citation analysis tells me who’s at the center of some scholarly discourse. A lot of times I’ll look for scholarly treatment and then look for mass media coverage in high-quality periodicals — The Atlantic, The New Yorker, Slate, Salon, The New York Times. I try to critically evaluate these sources as a whole as I do my research, or as Andrea Lunsford, who heads of the program in writing and research at Stanford, likes to say, I listen and analyze the “texts in conversation.”

Interestingly, the practical approach of asking questions of primary resources should never be dismissed. Journalists know this. In our own scholarly research at PIL, we have used primary sources, much as journalists do, to conduct our research. As information scientists, both Mike Eisenberg, PIL’s co-director and my colleague and friend, and I realized long ago that students had been tested a lot by librarians to ascertain their skills at finding and using information. But there was little study of how students actually used these strategies when carrying out research for courses or their everyday lives. We thought, “Wouldn’t it be interesting to asks students about their information-seeking process and workarounds?” And we have found this question makes for a helluva good story, as well as interesting research.