Understanding what it takes to keep teens safe and out of trouble has been a focus of researchers and policymakers for decades. Consistently, studies have found that schools play an important role in setting kids on positive developmental trajectories beyond simply their education, particularly through the safe and enriching environments they offer. In addition to improved educational attainment, school connectedness has also been associated with lower rates of substance abuse, violence, suicide attempts, and pregnancy.

To promote safety and improve school climate, policies that use suspensions and expulsion as a means of discipline are often implemented. Zero-tolerance policies are an example of such an approach, and they became federal law through the Gun-Free Schools Act of 1994, which required that all students found to have brought a weapon or firearm to school be expelled for a year. As states began to adopt this policy, it became increasingly expanded to apply to minor offenses including fighting, substance use and disruptive behavior.

The degree to which such policies have succeeded remains in dispute. The National Center for Education Statistics notes that “between 1992 and 2012, the total victimization rates for students ages 12 to 18 generally declined both at school (from 181 to 52 per 1,000) and away from school (from 173 to 38 per 1,000).”

Zero-tolerance policies have been criticized due to the ramifications of suspension and expulsion from school, as well as the policies’ inconsistent application. Studies have found that suspension and expulsion increases the likelihood of negative school outcomes including later suspension or expulsion, and is also associated with greater school dropout rates. Further, racial and ethnic minorities, as well as students with disabilities, bear a disproportionate burden of suspension and expulsion. A 2014 report from the U.S. Department of Education found that such disparities begin as early as preschool. Further, a 2014 study in the American Educational Research Journal concluded that, even after taking into account a student’s infraction type, gender, socioeconomic status and school demographics as well as the school principal’s attitude towards discipline, a black student still had 25% higher odds of being expelled than a white student.

Little methodologically rigorous research has been conducted on the effectiveness of zero-tolerance policies, likely due to the high degree of variation in the way they are implemented in schools. However, the American Psychological Association convened a task force in 2008 to assess the evidence base with respect to the degree such policies impact youth and schools. Ultimately, it was concluded that, “zero-tolerance policies as applied appear to run counter to our best knowledge of child development,” and that they “have not been shown to improve school climate or safety….[nor have they] proven an effective means of improving student behavior.” 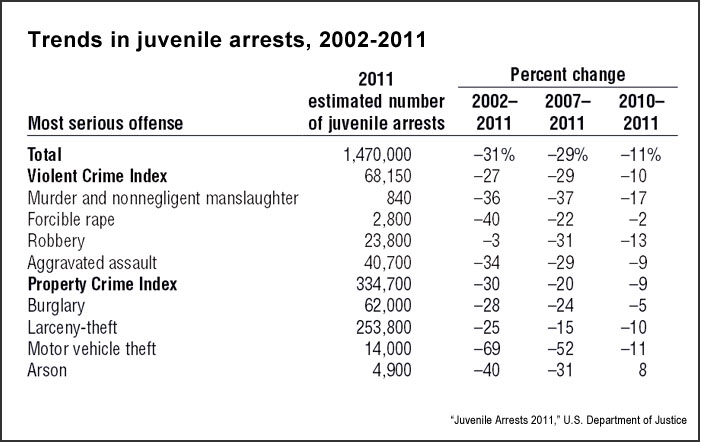 Alternatively, attempts to reduce youth delinquency and crime through after-school programs have been found particularly effective and associated with improved outcomes for children. The Harvard Family Research Project defines after school programs as, “an array of safe, structured programs that provide children and youth ages kindergarten through high school with a range of supervised activities intentionally designed to encourage learning and development outside of the typical school day.” A meta-analysis of programs that promote personal and social skills found that participation was associated with, “significant increases in [youth] self-perceptions and bonding to school, positive social behaviors, school grades and levels of academic achievement, and significant reductions in problem behaviors.” Additionally, an evaluation of programs in Maryland in 1999-2000 found that participation was related to less delinquency among middle-schoolers; evaluations of programs such as After School Matters have also found positive outcomes in terms of behavior and self-regulation.

It is also worth noting research on the use of after-school programs to help students cope with unstable and even violent home environments. A 2012 study in the Journal of Research on Adolescence, which looked at the experience of students in Chicago, found that “intensive participation in after-school programs weakened the association between parents’ domestic violence and youths’ internalizing problems.” Some new research is also examining the ways in which after-school programs can help develop positive collective behaviors among student communities.

Another approach adopted by policymakers to address juvenile crime and delinquency has been the implementation of youth curfew laws. Although curfew laws gained increasing attention in the 1990s, they have been present in US cities for more than a century. Such laws are ordinances administered on the local level that restrict minors from being in public spaces or streets, typically during late night hours. Although curfew laws are implemented with the aim of curbing youth crime, evidence of their effectiveness has been lackluster and methodologically questionable. With that in mind, a 2003 review of the literature failed to find evidence of the laws’ effectiveness in preventing crime. However, a more recent analysis from 2011 found that, “being subject to a curfew reduces arrests of juveniles below the curfew age by approximately 10 percent in the five years following enactment.” Although the evidence base is not decisive, juvenile curfew laws remain popular in cities and towns across the United States, often in the face of criticisms around the infringement on the rights of young people.

The following studies offer a more comprehensive review of the evidence base behind zero-tolerance policies, after school programs and youth curfew laws:

Abstract: “Although there can be no dispute that schools must do all that can be done to ensure the safety of learning environments, controversy has arisen about the use of zero-tolerance policies and procedures to achieve those aims. In response to that controversy, and to assess the extent to which current practice benefits students and schools, the American Psychological Association convened a task force to evaluate the evidence and to make appropriate recommendations regarding zero-tolerance policies and practices. An extensive review of the literature found that, despite a 20-year history of implementation, there are surprisingly few data that could directly test the assumptions of a zero-tolerance approach to school discipline, and the data that are available tend to contradict those assumptions. Moreover, zero-tolerance policies may negatively affect the relationship of education with juvenile justice and appear to conflict to some degree with current best knowledge concerning adolescent development. To address the needs of schools for discipline that can maintain school safety while maximizing student opportunity to learn, the report offers recommendations for both reforming zero-tolerance where its implementation is necessary and for alternative practice to replace zero tolerance where a more appropriate approach is indicated.”

Abstract: “After school programs (ASPs) are popular and receive substantial public funding. Aside from their child-care and supervision value, ASPs often provide youth development and skill- building activities that might reduce delinquent behavior. These possibilities and the observation that arrests for juvenile crime peak between 2 p.m. and 6 p.m. on school days have increased interest in the delinquency prevention potential of ASPs. This study examined effects of participation in ASPs conducted in Maryland during the 1999–2000 school year and the mechanism through which such programs may affect delinquent behavior. Results imply that participation reduced delinquent behavior for middle-school but not for elementary-school- aged youths. This reduction was not achieved by decreasing time spent unsupervised or by increasing involvement in constructive activities, but by increasing intentions not to use drugs and positive peer associations. Effects on these outcomes were strongest in programs that incorporated a high emphasis on social skills and character development.”

Abstract: “A meta-analysis of after-school programs that seek to enhance the personal and social skills of children and adolescents indicated that, compared to controls, participants demonstrated significant increases in their self-perceptions and bonding to school, positive social behaviors, school grades and levels of academic achievement, and significant reductions in problem behaviors. The presence of four recommended practices associated with previously effective skill training (SAFE: sequenced, active, focused, and explicit) moderated several program outcomes. One important implication of current findings is that ASPs should contain components to foster the personal and social skills of youth because youth can benefit in multiple ways if these components are offered. The second implication is that further research is warranted on identifying program characteristics that can help us understand why some programs are more successful than others.”

Abstract: “Juvenile curfew laws have become a pervasive and popular strategy for controlling juvenile crime. Public opinion is solidly behind the use of curfews, and the primary basis for this support is the notion that curfews make streets safer. This article provides preliminary results from a systematic review of empirical research on juvenile curfews, concluding that the evidence does not support the argument that curfews prevent crime and victimization. Juvenile crime and victimization are most likely to remain unchanged after implementation of curfew laws. Other aspects of curfew research, such as efficiency at detecting criminal activity, costs of enforcement, crime displacement, counterintuitive findings, and characteristics of curfew violators also are discussed. Finally, suggestions for future research are offered.”

Abstract: “Youth curfew ordinances are a widely touted, yet little studied, policy tool available to local police departments. This paper evaluates the effectiveness of curfew ordinances by comparing the arrest behavior of various age groups within a city before and after curfew enactment. The evidence suggests that curfews are effective at reducing both violent and property crimes committed by juveniles below the statutory curfew age. Arrests of adults and youth above the curfew age also appear to decrease in the wake of curfew enactment; however, these effects are smaller and statistically insignificant.”

Abstract: “The parens patriae doctrine is grounded in the proposition that children sometimes need the law’s protection from their own improvidence or immaturity, and sometimes even from the conduct of their parents or other caretakers. Parens patriae underlies much state and federal regulation in such areas as abuse, neglect, foster care, adoption, medical decision-making, support, and delinquency. The doctrine also underlies the wide range of protective legislation that regulates children’s conduct, the subject of this article.”

Summary: “This note seeks to sort out the contradictory and confusing curfew doctrines enunciated by the federal circuits. It also demonstrates the weaknesses of the primary criticisms of juvenile curfews, particularly the claim that curfews should be subjected to rigorous statistical analysis. Part I briefly describes both the history of juvenile curfews and the arguments traditionally raised in opposition to such ordinances. Part II looks at Supreme Court case law regarding the rights of minors, focusing on the seminal plurality opinion in Bellotti v. Baird and the various ways that federal courts of appeals have understood that decision to affect equal protection analysis. Part III argues that despite the varying approaches of the circuits, the Dallas ordinance approved by the [Supreme Court’s ruling in Qutb v. Strauss] remains a model curfew capable of surviving constitutional challenge in most circuits. Finally, Part IV considers the ways in which criticism of the statistical bases for juvenile curfews has played out in federal courts and argues that the Second Circuit’s decision in Ramos is misguided.”

One of the most common ways reporters cover elections — with a focus on who’s in the lead and who’s behind instead of on policy issues — hurts the public and the news industry.

Policies and programs aimed at keeping kids safe and out of trouble: Research roundup