As the percentage of women in the workforce has grown over time — in 1974 it was just 47%, and by 2007 was nearly 71% — the need for affordable childcare options has become a focus of increasing media and public attention, with many new avenues for stories, trend analysis and investigations.

In his 2015 State of the Union Address, President Obama put the issue front and center, saying that childcare is a “must have” for working parents: “It’s time we stop treating childcare as a side issue, or a women’s issue, and treat it like the national economic priority that it is for all of us.” He proposed a new annual tax cut of up to $3,000 per child.

Making daycare arrangements is now one of the primary economic and logistical concerns for working parents, with profound career implications, especially for women. According to the Bureau of Labor Statistics, 28% of mothers with young children worked in 1975, more than doubling to 60% by 2013. Over the same period, the number of daycare industry employees increased by nearly 250%. The BLS notes that investment in childcare by non-profit and government agencies, as well as new tax credits, also helped to fuel the industry’s growth.

The group Child Care Aware notes that about 11 million children under age 5 spend an average of 35 hours a week in child care. For infants in center-based care, the average annual cost ranges from $5,496 in Mississippi to $16,549 in Massachusetts; for 4-year-olds, care in a center ranges from $4,515 in Tennessee to $12,320 in Massachusetts, according to Child Care Aware. The quality of care and degree of regulation of facilities has been found to vary widely. Childcare workers (excluding preschool teachers) continue to be paid some of the lowest wages of any professional field — just $21,490 on average.

According to Census Bureau data, a third of young children — or 6.7 million — receive care from a nonrelative on a regular basis, including 4.8 million children who attend an organized preschool or daycare facility. The remaining children are involved in other kinds of arrangements, such as daycare programs based in a provider’s home. To see broad and shifting patterns of childcare across American society, see the Census Bureau’s 2013 report “Who’s Minding the Kids?” It notes that “families with children under 5 paid, on average, $179 per week, or over $9,300 a year for child care.” Further, “the average cost of childcare for families with an employed mother increased between 2005 and 2010, from $124 to $142. While the cost of child care increased over time, the percent of family monthly income spent on child care has stayed constant between 1997 and 2011, at around 7%.”

Affording childcare can be a challenge for parents, particularly those with low incomes. A 2014 Pew Research Center report found that families earning less than $18,000 annually spend about 40% of their income on childcare (compared to 7.2% of income for all families). The report notes that the number of stay-at-home mothers has increased over the past 15 years, a trend that may be explained by prohibitive childcare costs. At the same time, there are a number of government programs that offer free access to daycare and preschool for young children. The federally funded Head Start program serves more than 1 million children from birth to age 5. All but 10 states have state-funded preschool programs, which usually serve children starting at age 4, but funding and participation rates vary widely. 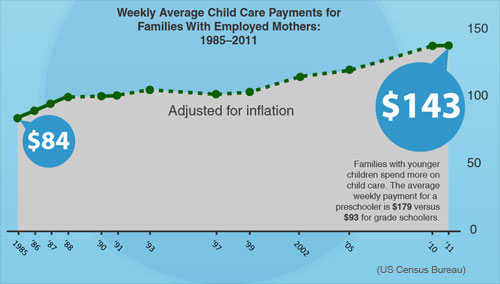 For state-by-state data, including locations of facilities and rules, see Childcare.gov. Child Care Aware also provides state-level analysis and ranks each state according to the degree of oversight and regulation, among other metrics.

Below is a selection of relevant studies as well as other data sources on daycare and early childhood education in the United States.

Findings: “After the 2011-2012 downturn in spending and quality, many state pre K program budgets leveled off and even regained some ground. This offers hope that as state budgets emerge from the recession, policymakers will prioritize early learning programs. However, this was also the first year since we began reporting (2001-2002), that states failed to increase the number of children they serve in pre-K. The loss of 9,160 children from enrollment at age 4 and 42 children at age 3 are modest changes, but this is the first decrease we have observed. At the same time, this represents a reversal—or at least a pause—of the trend toward spreading too little funding over ever more children, which led to expanded access while jeopardizing program quality. What remains to be seen is whether the small enrollment decrease of 2012-2013, coupled with a small increase in spending, represents a turning point after which both access and quality will be increased, or simply a new stasis in which neither advances significantly.”

Findings: “Consistent with findings from the other studies being compared here, the Abecedarian Project’s treated group significantly excelled over the control group in educational attainment at age 30. The standardized effect size was moderately large. Unexpectedly, however, the Abecedarian early treatment was not associated with a higher rate of high school graduation, but rather with going beyond high school. Prior analysis examining the predictors of young adult education suggested that family factors were relatively more influential insofar as completing high school was concerned, whereas early childhood intervention was strongly related to going on to college (Pungello et al., 2010). At age 30, the treated Abecedarian participants were 4.6 times more likely than the control participants to have earned college degrees.”

Findings: “Our results indicate that parental satisfaction with daycare is a significant predictor of parental stress and that low quality of care moderates the relation between low family income and high parental stress. The results underline the importance of daycare quality and of parental satisfaction in regulated daycare and the importance of interventions designed to enhance quality in daycare settings where levels of quality are low. These results are particularly important in a context where a regulated nonprofit childcare services network is largely funded by the government in order to insure equal opportunities for all.”

Findings: “This paper provides evidence of the long-term benefits of Head Start for a recent birth cohort of children. While my results rely on non-experimental comparisons between siblings who differ in their participation in the program, I find little evidence of systematic within-family bias in preschool assignment, and the results are robust to sensitivity checks and alternative specifications. I estimate that the long-term impact of Head Start is about 0.23 standard deviations on a summary index of young adult outcomes, with larger impacts for African Americans and relatively disadvantaged children.”

“How Can Parents Get Involved in Preschool? Barriers and Engagement in Education by Ethnic Minority Parents of Children Attending Head Start”
Mendez, Julia. Cultural Diversity and Ethnic Minority Psychology, 2010. Vol. 16, Issue 1. doi: 0.1037/a0016258.

Findings: “An intervention was developed to promote parent involvement with ethnic minority families of children attending Head Start preschool programs. Two hundred eighty-eight predominantly African American families from a small southern city were included in this study. Parent satisfaction with the program was high, yet engagement was less than optimal. Some effects were found for the program, despite low levels of participation. Ethnic minority parents who received the intervention increased the frequency of reading to their child as compared with parents in a comparison group who did not receive the program. The quality of the parent–teacher relationship was significantly correlated with parental participation in the intervention. Program participation and the parent–teacher relationship were correlated with higher levels of children’s school readiness abilities. Children in the intervention condition showed stronger end-of-year receptive vocabulary and parent-rated social competence as compared with children who did not receive treatment.”

Findings: “The effects of regulations governing staff-child ratio, group size, and staff qualifications in child care centers are estimated, using data on a sample of centers. The data contain measures of staff characteristics and wages, price of the service, and the developmental quality of the child care provided. Regulations vary across states, but may be endogenous to these outcomes. Estimates with state fixed effects are feasible because regulations vary within states by age group of children and job title of staff. Estimates with state fixed effects show that tougher regulations have some impact on input use, but have little or no impact on price and quality. The most striking finding is that tougher regulations reduce staff wages, suggesting that the incidence of child care regulations is on employees of daycare centers.”