Bullying is as old as humankind and, unfortunately, as new as the Internet. It’s found on playgrounds and in classrooms, on popular sites like Facebook and ask.fm, and can even play out through non-consensual “sexting.” U.S. state laws aimed at reducing bullying vary widely, often because their definitions of such behavior differ. Many states focus on specific actions, others look at the intent or motivation of the aggressor, while some focus on the degree and nature of harm done.

To better understand its roots, impacts and consequences, a broad range of studies have looked at various aspects of bullying behavior. A 2011 study in the Journal of Child Psychology and Psychiatry looked at the correlation between low theory of mind — an individual’s ability to interpret correctly the mental and emotional states of others — and bullying experiences. Other research has considered whether bullying is a potential warning sign of school violence, and the possibility that violent video game play could contribute to youth aggression.

A 2013 study in Psychological Science, “Impact of Bullying in Childhood on Adult Health, Wealth, Crime and Social Outcomes,” looks at the long-term effects of childhood bullying on victims and perpetrators. The researchers — Dieter Wolke of the University of Warwick and William E. Copeland, Adrian Angold and E. Jane Costello of Duke University — defined bullying as a “systematic abuse of power and [it] refers to repeated aggression against another person that is intentional and involves an imbalance of power.” Bullied children were often found to be those who were “withdrawn, physically weak, or prone to show a reaction (e.g., run away, become upset), who have poor social understanding or who have few or no friends who can stand up for them.” Bullies, on the other hand, “have high social impact in school despite being controversial (i.e., liked by some children but disliked by their victims), come from disturbed families, and are deviant in their behavior but not emotionally troubled.” Children who are both victims of bullying and perpetrators “seem to be the most troubled: impulsive, easily provoked, low in self-esteem, poor at understanding social cues, and unpopular with peers.”

The researchers based the current research on a sample of 1,420 North Carolina children in three groups (ages 9, 11 and 13) who were enrolled in the Great Smoky Mountains longitudinal population-based study in 1993. The children completed annual assessments with their primary caregivers until age 16, and then were surveyed again a decade later. They were assessed for involvement in bullying in childhood and then assessed as young adults for health, risky behavior, wealth and social relationships. 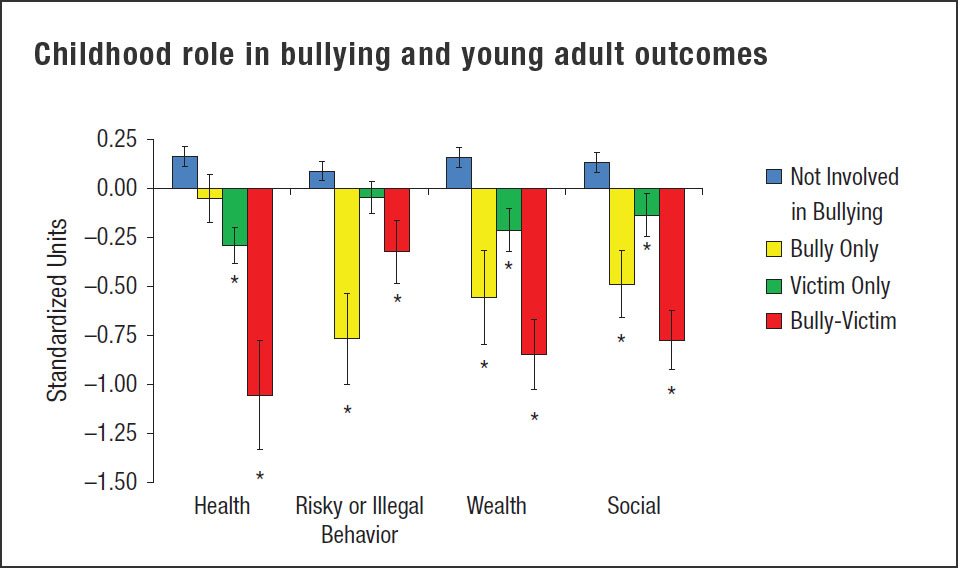 The researchers note that while the sample is not representative of the U.S. population — blacks were underrepresented and American Indians overrepresented — “the prevalence rates of bullying and peer victimization reported by subjects of the present study in childhood are similar to rates reported in population-based studies.”

Impact of bullying in childhood on adult health, wealth, crime and social outcomes