The challenges of finding quality day care are familiar to nearly all working parents. Not only are the costs rising in general to raise children — and the work demands increasing for many parents — but the flaws of the system of organized care as a whole are becoming more apparent.

As the health journalist Jonathan Cohn of The New Republic wrote in his 2013 feature “The Hell of American Day Care,”

Excellent day cares are available, of course, if you have the money to pay for them and the luck to secure a spot. But the overall quality is wildly uneven and barely monitored, and at the lower end, it’s Dickensian. This situation is especially disturbing because, over the past two decades, researchers have developed an entirely new understanding of the first few years of life. This period affects the architecture of a child’s brain in ways that indelibly shape intellectual abilities and behavior. Kids who grow up in nurturing, interactive environments tend to develop the skills they need to thrive as adults — like learning how to calm down after a setback or how to focus on a problem long enough to solve it. Kids who grow up without that kind of attention tend to lack impulse control and have more emotional outbursts. Later on, they are more likely to struggle in school or with the law. They also have more physical health problems. Numerous studies show that all children, especially those from low-income homes, benefit greatly from sound child care.

Indeed, a vast research literature has come about relating to early childhood education and support programs.

The overall child care picture for American families is diverse, however. An April 2013 report in the U.S. Census Bureau’s Current Population Reports series, “Who’s Minding the Kids? Child Care Arrangements: Spring 2011,” provides a statistical picture reflecting the broader population. The survey interview on which the report is based asked parents about all forms of care used at least once a week. The report notes that “in a typical week during the spring of 2011, 12.5 million (61%) of the 20.4 million children under 5 years of age were in some type of regular child care arrangement.” They spent an average of 33 hours a week in child care.

Highlights from the report include: 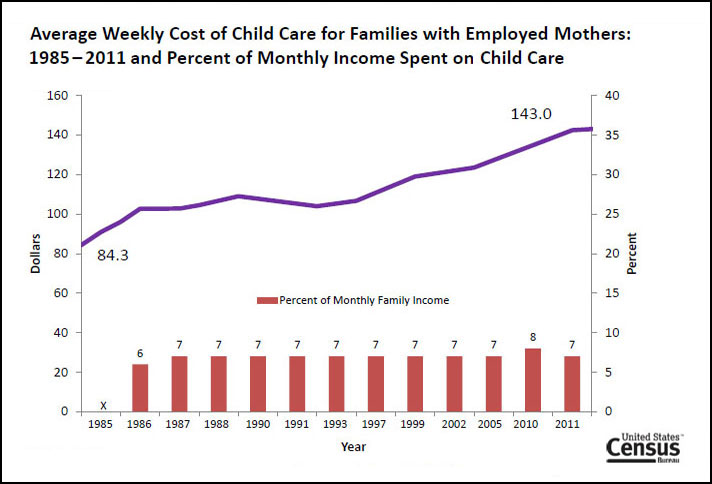 For a look at state-by-state data, see the federal government’s site Childcare.gov.