The phenomenon of increasing “job polarization” in the U.S. labor market — a sharper division of work into low- and high-skill categories, with fewer middle-skill jobs left — has been well-documented in academic literature. Technology, globalization and the decline of U.S. manufacturing are often thought to be driving this trend. But the precise dynamics are still being investigated.

A 2013 study from economic researchers Didem Tüzemen and Jonathan Willis at the Federal Reserve Bank of Kansas City, “The Vanishing Middle: Job Polarization and Workers’ Response to the Decline in Middle-Skill Jobs,” analyzes 30 years of data from the Census Bureau’s Current Population Survey to build a more accurate national picture of this labor trend. The authors ultimately call into question the “common assumption” that “job polarization has been driven mainly by contraction in a few sectors, such as manu­facturing.”

Middle-skill jobs are defined as those where workers “primarily perform routine tasks that are proce­dural and repetitive.” These are in employment areas such as “sales, office and administrative, production, construction, installation, maintenance and transportation.”

The study is forthcoming in the Economic Review. Its findings include:

The study also features this chart illustrating these shifts over time: 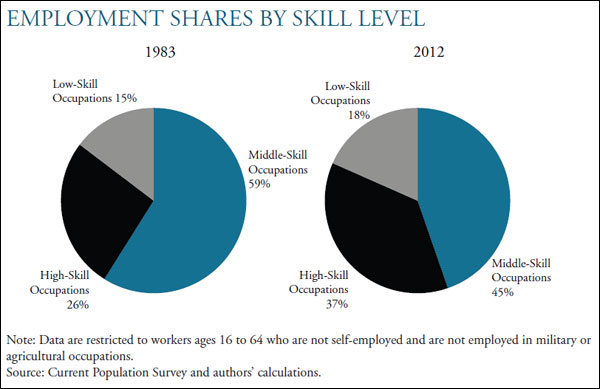