The Federal Trade Commission (FTC) documents consumer complaints about fraud and commercial abuse of all kinds — from violations of the “Do Not Call Registry” rules to identity theft, impersonating the IRS, fake sweepstakes, and credit-card fraud. For journalists, one of the more underutilized federal data sources is the FTC’s Consumer Sentinel Network, which gathers data from a wide variety of sources, including state attorneys general, the FBI and more local entities such as Better Business Bureaus. The Sentinel Network data itself is available only to law enforcement, but top-level findings and state- and metro area-level data are published on an annual basis.

The FTC’s latest report, “Consumer Sentinel Network Data Book for January-December 2014 ” was released in February 2015, and shows evolving patterns of complaints across the United States. Reporters looking to assess complaints in their state and specific local areas can refer to individual statistical breakouts, beginning on page 21. The FTC makes clear that these are “unverified” consumer complaints and are not based on a representative survey or sample. Nevertheless, the data are revealing and can serve as the basis for reporting in the field.

The FTC report’s findings include: 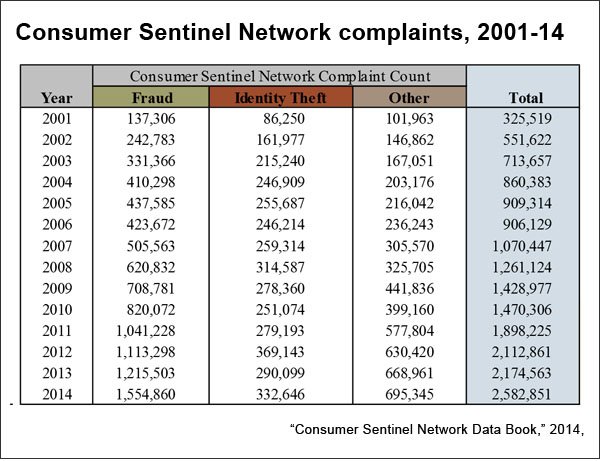 Given privacy concerns, it remains unclear how much of this data — particularly the names of entities and businesses accused of fraud — might be subject to the Freedom of Information Act (FOIA), and a 2014 Washington, D.C., District Court legal decision possibly opens up one new avenue for inquiry. For its part, the Consumer Financial Protection Bureau, which feeds data into the Consumer Sentinel Network, is now releasing the specific names of banks, mortgage companies and other businesses that are the subject of consumer complaints. And it is possible that the state agencies providing the underlying data to the Sentinel Network might be open to FOIA requests.

Related research: A 2014 study published in Psychological Science, “Contrary to Psychological and Popular Opinion, There Is No Compelling Evidence That Older Adults Are Disproportionately Victimized by Consumer Fraud,” gathers evidence relating to questions about age cohorts and relative levels of susceptibility. There is also an evolving academic literature on how warnings and other techniques might reduce susceptibility among consumers.

Rates of fraud, identity theft and scams across the 50 states: FTC data