Despite significant progress in recent decades, American women remain disadvantaged in terms of pay, promotion prospects and work-life balance. Other areas of concern include educational attainment and labor force participation, legal maternity rights and family-friendly workplaces, and presence of women in positions of power. According to a 2012 Census Bureau report, women make as little as 77 cents for every dollar that men earn for equivalent work. This and similar figures are often cited, but there’s a lot of nuance in the particulars, including the type of work performed and workers’ age, race and ethnicity.

In October 2013 the U.S. Bureau of Labor Statistics (BLS) released “Highlights of Women’s Earnings in 2012,” which gives a comprehensive overview of women’s earnings in the United States. Like the Census Bureau study, the BLS report is based on data from the Current Population Survey, an analysis of 60,000 representative households from across the nation. According to the BLS, in 2012 women on average made 81% of the median earnings of male full-time workers. (Note that the 81% figure does not necessarily mean that women’s earnings relative to men have increased four percentage points, only that the methodology of the Census Bureau and the BLS differed.)

The BLS report highlights the fact that while American women have made great strides in the past 30 years — they made only 62% of what men did in 1979, the first year for which comparable earnings data are available — they continue to earn significantly less than men. Moreover, as indicated in the report, the narrowing of the gender pay gap has slowed over the last decade: 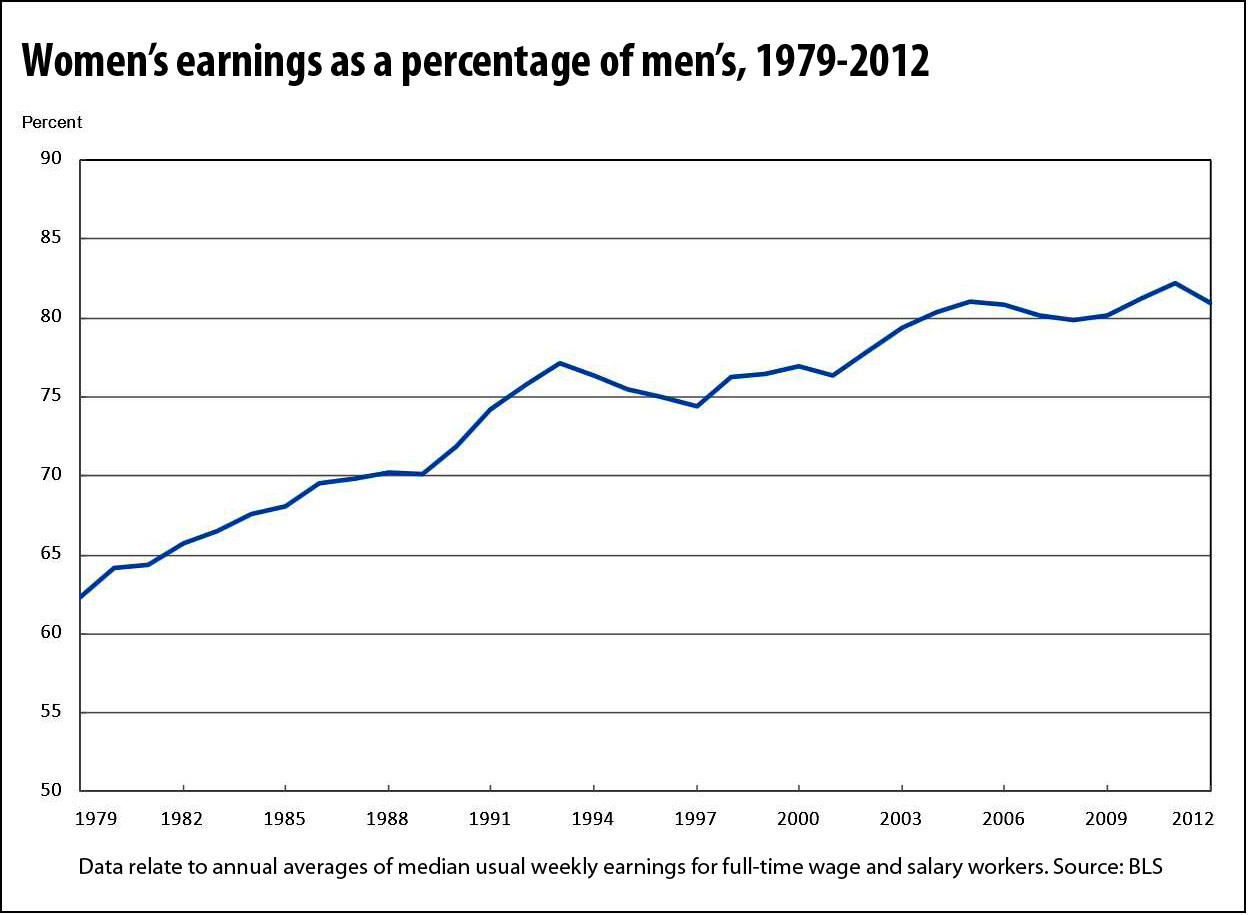 The Bureau of Labor Statistics report breaks down the gender pay gap by age, race, occupation and hours worked. Findings include:

A related 2013 report from the Bureau of Labor Statistics, “The American Time Use Survey,”  provides insight into the challenges that women face in balancing work, family life and household chores. Among its findings: On an average day, 82% of women spent some time doing household activities, compared to only 65% of men. Furthermore, a 2013 study from the University of Alabama, “When You Just Cannot Get Away,” found that women were more likely to have negative work-home spillover, and respondents in the two lowest family income brackets had higher negative spillover than those earning more.