Economist Thomas Piketty’s best-selling 2014 book Capital in the Twenty-First Century has stirred further debate about wealth and income disparities and their public policy dimensions. Other important events and trends have shaped the context of this renewed focus on issues of inequality in political discourse: From the 50-year anniversary of President Johnson’s Great Society to the impact of the Great Recession on poverty levels and middle class wealth, and subsequently the uneven gains of the fragile recovery.

An important part of this discussion has been about whether people of different incomes are paying their “fair share” in taxes. Movements such as Occupy Wall Street have put forth a critique of the current system of taxation. In the United Kingdom, a campaign for a “Robin Hood Tax” on financial transactions has focused on getting banks and other financial institutions to contribute more toward reducing the deficits in public finances that originated with the financial crisis. While such ideas have gained little traction in mainstream politics, there has been a renewed effort to crack down on global tax avoidance. A pivotal debate in the 2012 U.S. presidential election revolved around the figure of “47%” — the percentage of Americans who pay no income taxes. Meanwhile, the top 1% of households have shouldered as much as 26.7% of federal tax liabilities over the past decade.

A 2014 paper published in OECD Social, Employment, and Migration Working Papers, “Trends in Top Incomes and Their Taxation in OECD Countries,” analyzes data from the World Top Income Database to update previous work on income inequality and trends among the top 1% of incomes in OECD countries. The analysis incorporates data covering the global financial and economic crisis. The database, which was constructed by Piketty, among others, is based on information from tax returns in each country. This is a novel approach compared to the most commonly used measure of inequality, the Gini Coefficient, which is compiled using the results of survey data. The study’s authors, Michael Foster, Ana Llena-Nozal and Vahe Nafilyan, discuss reasons for the rise in incomes of the top 1% over the past 30 years; the impact of the Great Recession on their incomes; how those in the top income bracket respond to different forms of taxation; and the implications for tax policy. 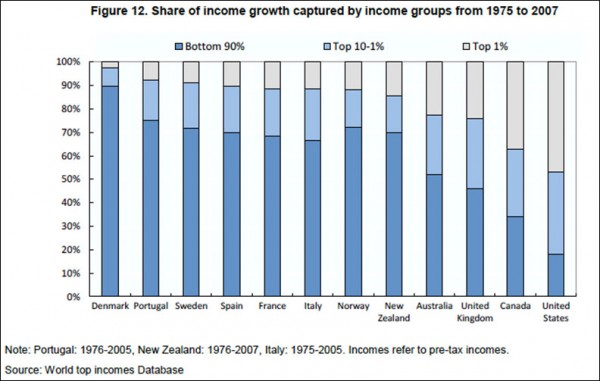 “There is renewed interest,” the study’s authors conclude, “in adjusting the amount of tax that top income recipients are subjected to across several OECD countries because the sustained rise in the share of top income recipients in total income is taken as a sign that their ‘ability to pay’ tax may have increased and this has coincided with a period where public finances are tight. Trade-offs must, however, be taken into account when designing comprehensive tax reforms.” Further, they add: “In many OECD countries, the rise in overall inequality has also been driven by low-income households falling behind in relative and, sometimes, in real terms. In order to tackle the increase of overall inequality, a comprehensive policy strategy and policy mix of these policies to promote equality of opportunities is needed.”

Trends in top incomes and their taxation in OECD countries